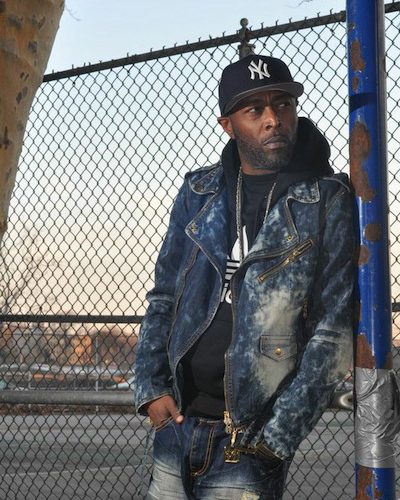 “Black Rob joined the mob, it ain’t no replacin’ him.”

The Notorious B.I.G. rapped those words on Puff Daddy’s “Victory” back in 1997, and a name was placed in the minds of hip-hop fans. A little over two years later Black Rob would cement his name in those minds with his mega-hit “Whoa.”

Some bad decisions led to significant jail time for the Harlem native, but in 2010 he returned from a four year stint with a new focus and a determination to make things right, both with his life, and his career.

On April 21st Black Rob will release his next album, titled Genuine Article

, and we sat down with him to find out more about his tumultuous past, redemptive present, and that famous line of Biggie’s that set everything off 18 years ago.

Adam Bernard: You spent four years in prison, from 2006-2010. That is a very long time. When you were finally released, what was the hardest aspect of the transition back to regular life, and society?

Black Rob: You know, it was just, come back, man, and just try to do the right thing.

AB: You just came back and lived life?

BR: Basically, you know what I’m saying, that’s how it is. I didn’t have any problems. It was all about getting back to the rap thing, and trying my hardest to maintain. Luckily, Puff had my back, therefore I just basically chilled. Chilled and made records.

AB: It’s interesting you said Puff had your back. I was going to ask how many people from the music side of your life stuck by you through your troubled times.

AB: It sounds like you still had a handful of folks who stuck with you.

BR: Nah, you know, I had a few family members, but my core niggas, my niggas I was hanging with every day out here, what’s up with y’all? I just took it like alright, when I get home I’ll just be on my own, do this album, and bring myself back, man.

AB: Is there anything about shedding so many people from your life that makes it easier?

AB: You mentioned you were fucking up, and you don’t blame people for how they reacted. A lot of people look at what you did, the criminal possession of more than $6k worth of stolen jewelry, and think, “This guy had money, fame, a record deal, what on earth was he thinking?” What was going on in your life that people may not have known about?

BR: You know, everyday shit, man. Everyday problems. I couldn’t deal with them at that time, so I just fucked up.

AB: Those must have been some pretty intense everyday problems.

BR: Not really, man. Just everyday things. Everyday shit. But I’m back, baby. I don’t like to dwell on the old shit because it’s gone. What’s up with new Rob? What’s up with the new things going on in my life?

AB: You mention trying to be better. Is there a feeling, or theme, of redemption with everything you’re doing right now?

BR: Yeah, definitely. Definitely, man. I gotta show people that I can chill, because I admit I was doing some stupid shit, but I’m here now. They don’t think I can do it … my friends.

BR: Yeah. Some of them don’t, though, but I’m gonna show them.

AB: I don’t know if I could count someone as a friend if they didn’t think I could achieve things. At that point they’re bumped down to “acquaintance.”

AB: I read that you went down south to get your mind and your body right. What did that involve?

BR: It was all about chillin, man. Going places, and feeling the vibe, and getting ready to blow up. People down there are cooler, more down to earth, so I got my mind and my body right. I got my body right because I was chillin doing workouts. It was good for me, man.

AB: Was there a specific place you felt the most chill?

AB: It sounds like we may want to change your name to Zen Rob. You’re pretty chill about a lot of stuff.

BR: That’s how it be when you come from jail and ain’t nuttin else you can do. That’s it, man. That’s it, and that’s how I’m gonna do. I’m telling you, man, it’s real shit, man.

AB: You’re very chill now, but I’m guessing in the early 2000s you were having a lot of fun. Bad Boy Records was huge, and “Whoa” was a gigantic hit. What moment represented the height of fame, or the height of that era, for you?

BR: Aw, man. I really felt it when I started traveling, like state to state, going to people’s houses and seeing what they’re living like. That’s what really made me feel like I’m here, man.

AB: Who was the most random person whose house you ended up walking into?

AB: Staying in that era, do you have a favorite memory from hanging out with Biggie?

BR: Nah, I never hung out with Biggie. I’d see him once in a blue (moon) coming through, or I’d see him in the club, and I’d be standing there, we’d be chillin. That’s the type of chillin we did, so I ain’t never really chilled with him.

AB: So was it a shock to you when he mentioned you by name on “Victory?”

BR: Exactly! It was a shock. I didn’t know he was gonna do that. I was like hold up, man, he shouted me out! What’s up!

AB: Do you remember the first time you heard that song? Were you driving around like, “Did I just hear my name on the radio?”

BR: That’s exactly how it went, man. I didn’t know nothin. I was (with a friend) just like, “Oh shit! Yo, he just said my name, man!” “No he didn’t.” “Yes he did, man!” Then we heard it again. I learned that song by the end of the night! I was just proud that he did that. I knew then and there that my name, I ain’t goin nowhere. I ain’t goin nowhere.

AB: In honor of two of my favorite journalists, Dan Le Batard and Bomani Jones, I have to ask, do you know which Knicks player Biggie was rapping about on “I Got A Story To Tell?”

BR: Uhh, {laughs} it’s about him and some girls, I know that, right?

AB: You laughed. You know which Knicks player it’s about.

AB: Finally, let’s end this on a fun note, what’s the most embarrassing thing someone might catch you singing along to?

BR: DeBarge, or something.