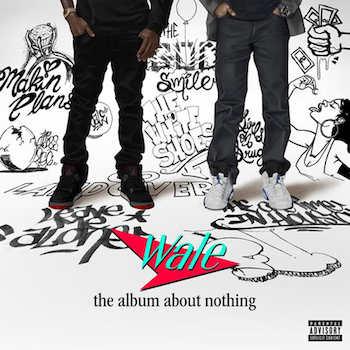 Wale :: The Album About Nothing

The soulful production, harnessing plenty of live instrumentals, mixes well with the lingering hints of MMG production. Gospel chants intersperse the post-hyphy drums and heavy, minimal basslines. Here, he rants about his frustrations with hip-hop gatekeepers not letting him be the classic he believes himself to be, he transcends the empty symbols of urban flashiness without condescension, and is at his best in poignant tributes to the feminine in his life.

Seinfeld clips narrate the album, and the cliche white-guy voice is both jaded advisor and proponent of the devil’s logic. Opening with “The Intro About Nothing,” Wale grounds his soul in family and introspective hunger. But what is this hunger for? As Seinfeld says in the beginning of “The Helium Balloon,” “I can’t fly, but I can get a helium balloon.” Wale laments the fractional selling of dreams with this metaphor, expressing the tribulations and expectations of ambition as the music shifts to a grandiose bassline, incorporating reggae and boots stomping to a military beat. Perhaps one could feel a little closer to being a famous rapper by purchasing a new jersey, but everything you do is controlled by those who really have the power. “Niggas will fly you up this high won’t let you fly to the moon.”

His pessimism continues in “The White Shoes,” as he digs into the useless materialism of urban culture, concluding that “These niggas love white shoes so much they’ll be buried in them.” The simmering antipathy towards how black culture has been sold to the media boils to a climax in “The Pessimist,” featuring J. Cole, where the uplifting instrumentals contrasts with the hopelessness of the situation he’s portraying. Tension builds through the song as he adds his voice to each refrain of “hopeless,” and denotes each problem in the black community, i.e “Who am I to change perception? If a nigga kill a nigga he’s another statistic.” While the public is eating up Love and Hip Hop, strippers with fat asses, and the furor over white vigilante justice, Wale deplores through the track that little is said about black-on-black crime.

After “The Middle Finger,” which seems to be put up towards critics like me who overanalyze each line, the second half of the album consists of stirring rhapsodies on girls who want everything but the white picket fence. This is why Wale’s work is so touching; while he could otherwise turn his narrative talents to guns and drugs, his dissertations on women make it all the more sweet- a word rarely used to describe reputable rappers. One of the most noteworthy tracks on the album falls into this category. “The Need To Know,” featuring SZA, asks an obvious question: Can consenting adults have sex without feelings being involved? The answer is yes, of course, but the “Saratoga Rain”-esque query holds a beautiful loneliness that defines what attracts female fans to Wale.

In “The Album About Nothing,” we can revel in Wale’s unique delivery. Like cursive, it’s the presentation of his slurred vocals that lend it beauty. Wistful yet pessimistic, tender and cutting, this album could’ve been themed by John Lennon, minus the word “Imagine.” The album closes on a love ballad, perhaps connoting that this is the saving grace of the world, as well as the best thing in his world right now. He shoulders the burdens of fame and the frustrations of an artist- but the beauty of his black queen makes it all okay.

Wale :: The Album About Nothing
7.5Overall Score
Music8
Lyrics7