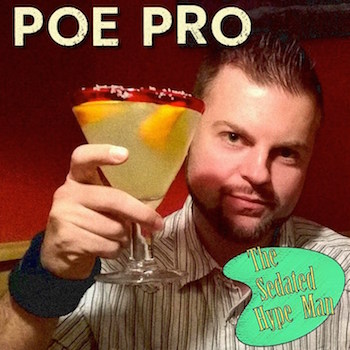 At RapReviews we’ve watched Poe Pro evolve over the last 5-6 years. In his earlier work he may not have been flattered to be described as “bland” and “cliche,” but as a fair-minded man, he took it constructively and sought to improve his overall game. The growth was evident on his most recent release, and although he still couldn’t be thought of as an upper echelon emcee, he worked hard enough to earn praise like “there’s a humor to Pro’s work that manifests itself in subtle ways.” Not everybody comes into the rap music world as white-hot as Nas did on “Live at the Barbeque,” and no matter what else you say about the Poetic Prophetic, I respect the fact he kept working and improving.

That journey may now be over. On the intro to “The Sedated Hype Man,” Pro vows that he’s ready to hang up his Nikes like Michael Jordan, retiring as a soloist (though leaving open the possibility of collaboration) after four albums. Actually, I’ll just let him describe it in his own words from the album’s second song “Get Sedated” where he says:

“This is my fourth album, call it my senior record
Cause after this I graduate to make collegiate records!
My talent can’t be measured, using standard or metric
I’m so chill that my flow can go below negative Kelvin”

There’s that subtle humor that I once wrote about – the obvious absurdity of something being lower than absolute zero – but only appreciated if you understand the science or laugh at things likecalculus humor.

There’s no denying that Poe Pro is an intelligent guy, and one who is concerned about the future of hip-hop, pining as he does for “the vibe from the Tribe/the days when Big and Tupac was still alive/wakin up for school, 7 AM yawning/to Ed Lover and Dr. Dre every single morning” on the song “Memories Live On” (also featuring Buck 50 and Notlaw). There’s no doubt that “sedated” also describes his rap style pretty well. Pro has always been and still is a very calm and measured lyricist in terms of his vocal tone and delivery. I’m not saying he needs a Ghostface Killah level of emotion to his flow, but he can unintentionally soothe you to sleep with his hypnotizingly calm style.

Poe Pro almost begged us for brutal honesty in his attached letter (with a surprising attached gift), but I find myself hard-pressed to be especially harsh about his overall effort. I respect his request though so I’ll give it a shot – starting with the fact that at 58 minutes this album is just a little too long (especially given his aforementioned NyQuil rap style). The “Outro” itself is nearly 7 minutes long – that’s straight-up excessive. There are times when Pro lets his penchant for sentimentality blur his vision as to whether or not a song is a good idea – tracks like “Stop & Smell the Roses” could have been skipped altogether. Occasionally he’s reaching when he tries too hard to be clever on songs like “Oxymorons for Morons,” which isn’t a bad idea on paper but just feels forced in execution.

Now that I’ve got the major negatives out of the way, I think it’s fair to say Poe Pro has reached his peak potential on “The Sedated Hype Man,” and if he wants to call it quits as a soloist he’s hit the high note he wanted. Memorable and enjoyable songs like “It’s So Obvious” featuring Sweet Mocha and mellow joints like “State of the Art” can’t really piss anybody off, which if you set out to make a rap album should at least be your FIRST goal. There are a lot of rappers out there today, particularly that are commercially distributed by major labels (I’m not gonna name names, you know who they are) that straight up piss me off by being so f@%!ing awful. Poe Pro is not awful. If you’re being harsh he’s mediocre, and if you’re being generous he’s slightly above average, but he’s definitely far from terrible either way. Thanks for the gift Poe, and rest assured that it did not change the score either way – you’ve earned exactly what you got.