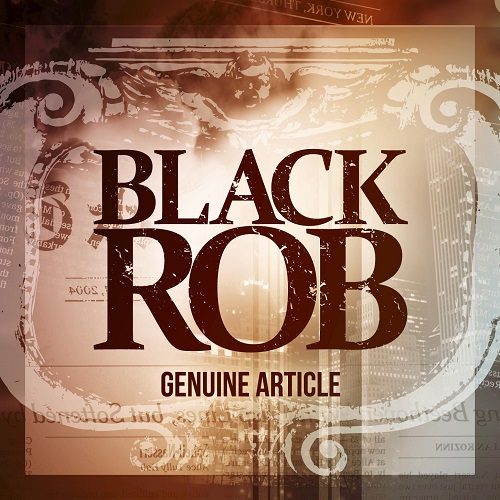 My favorite Black Rob song is one that millions have heard yet just as many forget about – “By a Stranger”. OK, so it’s actually Black Rob, Illacoin and Labba, but considering only Rob broke out further than the underground New York scene, I’ll let him have it. The song was featured on Grand Theft Auto III back in 2001 and only featured Rob’s verse – I’ve no idea why but it was a minute of Hip-Hop heaven for this writer. It had a killer Ayatollah instrumental, but it was the gruff, blunt vocals from Rob that gave it replay value. It showed Black Rob in a better light than the lyrical restrictions placed on him by his biggest hit “Whoa”.

Since then, outside of a few tracks on “The Life Story”, little of Black Rob’s discography has grabbed me in the way that fellow Grand Theft Auto III contributors Sean Price or Royce Da 5’9″ have done, and “The Genuine Article” shows why. Black Rob’s reluctance to grow as an artist means this album sounds like it could have been released 15 years ago.

A key reason for “By a Stranger” remaining a memorable Black Rob track is the down-to-earth rhymes and quotable lines. Apparently, Black Rob is 46 years old, and yet prison hasn’t changed him, judging by the rhymes and street mentality that remains in his music. There will be a wave of rappers in their mid-40s facing a similar dilemma to Rob, and while some (Cormega for instance) have adapted their style to appease a fan base that’s aged with them, there will be some that refuse to let go of their wild youth. It’s not just the content that fails to work, but the structure and formulas that have gone in to this album. There’s the obligatory ladies track “Where You At”, the New York track “Wave of New York”, a track about being real (“Need That Real Ish”) – it’s all very predictable.

There is the occasional moment where Black Rob strays from the early 2000s vibe; “Pat ‘Em Down” has an outlandish, electro production from Big French that just about works, thanks to Rob’s neat hook. “Let ‘Em Lay” is one of the better tracks on the album because it feels natural and boasts a nice, crunchy instrumental that complements Rob’s gruff presence.

It’s a shame then that these songs are too few and far between on “The Genuine Article” – something that Rob has suffered from throughout his career. In 2001, I probably would have picked up a CD based on one or two tracks, but it’s hard to ignore filler in 2015 and this album may well be genuine, but it doesn’t feel like the finished article.