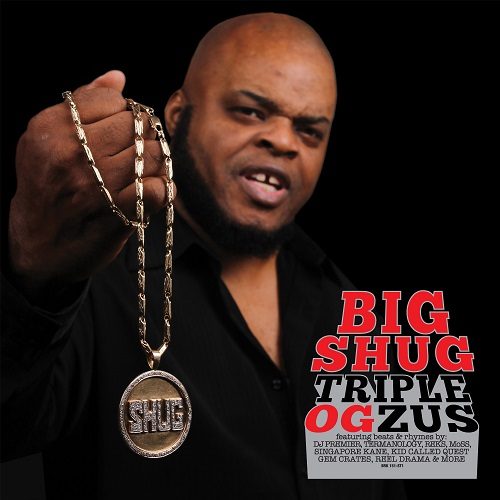 Big Shug has an envious career when you look at it objectively. A 25 year career in Hip-Hop can’t be ignored, one that stretches back to the late 80s, when Gang Starr was formed and Shug was an original member of the Gang Starr Foundation. Ever since Guru and Premier stopped releasing Gang Starr albums after 2003’s “The Ownerz”, Big Shug has repped the Gang Starr Foundation name and had some excellent DJ Premier production as a result. “Triple OGzus” is Big Shug’s sixth (fifth if you exclude 2005’s pre-album release “Never Say Die”) and is the final straw for this fan, who has stuck by Shug for a while, having owned his first three albums. This album is horrendous and it’s not just because of Shug’s rhyming this time.

Some of the elementary freestyle raps are forgivable when the track is built around a slick DJ performance or sees Shug set up his guests to tear it down, but “Triple OGzus” is the loneliest of Shug’s albums. Of the 18 songs, Shug is alone on thirteen of them. That’s a lot, and feels like more when there’s very little to enjoy lyrically. Respected underground lyricists Reks and Termanology lend their support on “Not A Fan”, a decent track that’s destroyed by an awful piece of Big Shug’s singing.

Ever since “Play It”, Shug has started singing on tracks and it’s never sounded good. In fact, it sounds awful. “Make That Body Do” is hugely embarrassing, despite a promising instrumental from Reel Drama, and the same formula occurs on “Relationships”. It’s as if Reel Drama and Big Shug threw some remnants in from a shelved R&B album they were working on. “In The Rain” (which closes the album) is Big Shug’s version of Oran “Juice” Jones’ hit “The Rain”, and it’s difficult to comprehend why it exists. Audibly, the song is shoddy karaoke, real singing in the shower’ type stuff.

Shug sounded hungry in the 90s on tracks like “Crush” and “The Jig is Up”, or the Gang Starr classic “The Militia”. Hearing him pop up on a mixtape was fine, but much like PMD and DMC, the simplistic rhyme patterns sound so outdated in 2015 that Shug would have to be saying something really interesting to warrant these levels of minimalism. As with previous albums from Shug, it’s the DJ Premier cuts that end up being the keepers. “I Am Somebody” is a perfect example of this, but even “I Bleed For This” and “Off Rip” aren’t as great as they could be, due to the uninspired hooks.

The best track is “Showtime”, a collaboration with M-Dot that features some swift slicing and dicing from DJ Djaz and a strong beat from DJ Brans; two DJs that have impressed in recent years despite the tired content of the emcees they work with. But the lack of guest emcees and the creepy, awkward crooning from “Shuggy Diamonds” confirm that “Triple OGzus” isn’t just a bad Big Shug album, but one of the worst Hip-Hop albums I’ve ever heard. I still find it hard to classify Big Shug as a bad rapper given his numerous collaborators and roots in the Gang Starr Foundation, but this album is impossible to forgive – a turd is a turd, no matter who tries to polish it.