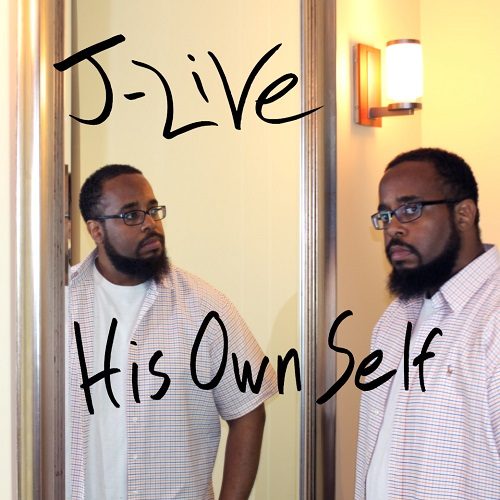 As far as discographies go, not many can mess with J-Live’s. Consistently releasing excellent albums, the underground veteran has made a name for himself as a critically acclaimed emcee who embodies the various aspects of Hip-Hop as a performer. “His Own Self” sees J-Live produce the whole project, something he’s not done since “Always Will Be” in 2003.

While it’s well known in Hip-Hop circles that J-Live is a talented dude, showcasing his DJ skills at his concerts, as well as his ability to scratch and spit simultaneously, he is also more than capable as a producer behind the boards, but some of the beats on this album fail to hit the highs of earlier efforts.

“Old S#%t” is classic J-Live, taking a theme and turning it in to a great piece of Hip-Hop you can imagine being performed live. It’s a song about being proud of wearing old clothes and refusing to bow to new fashions just because it’s new. While admitting to using an iPhone 5 because his iPhone 4 was left in the washing machine is remarkably down-to-earth as far as statements go by rappers, it’s typical J-Live and an example of his ability to turn a simple concept and flip it in to an anthem. Similar results are present on “Get It Together” and “Red & The Kid”, the latter being a dedication to DJ Red Alert and Kid Capri, two of J-Live’s favorite DJs he’d listen to growing up.

“I Am A Man” sees J-Live airing his thoughts on the heavy-handed police in the U.S. and how he has tired of being targeted as a black man. This was one of the edgier tracks on the album, as it showed an alternative perspective to the usual “f*** the cops” message many rappers choose to use. Unfortunately, some of the album falls short of the loftier standards that J-Live usually abides to. The decision to utilise a repetitive rhyme pattern on “I Just Don’t” is admirable from a writing perspective, but doesn’t sound great. It’s something you imagine sounding better in your head than out loud.

Despite my nitpicking, this is still a strong record and only faces criticism from being compared to the strength of the albums that precede it. The production may be slightly weaker, but the rhymes are still as playful, honest and technically precise as they have ever been. The chatty “Peace, Be Still” is an example of J-Live’s production not quite being up to scratch, but the majority of “His Own Self” still consists of good songs regardless; proof if ever it was needed that J-Live remains an interesting, and valuable asset to not just Hip-Hop music, but to the culture as a whole.

J-Live :: His Own Self
7Overall Score
Music7
Lyrics7