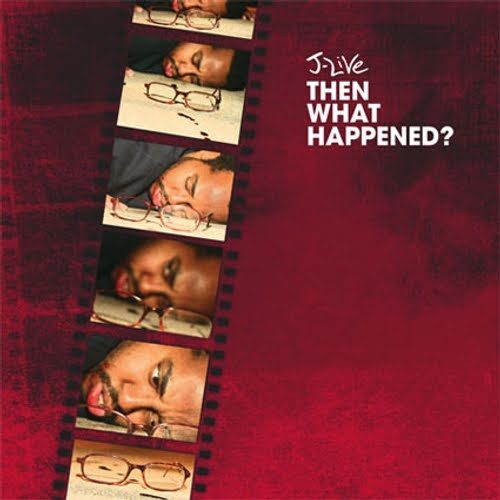 It’s always the same story with J-Live. On the mic, he’s damn near omnipotent, with an effortlessly intricate flow, flawless breath control, cinematic storytelling abilities, and the kind of lyrical expertise aspiring MCs would give a limb or two for. The musical side of his releases, on the other hand, has not always been up to par, case in point being 2005’s “The Hear After,” which was long on head-scratching lyrics and short on head-nodding beats. After a rejuvenated effort on his “Reveal the Secret” EP, J-Live is back to take his rightful place in a music scene that has been essentially narcoleptic when it comes to his superhuman lyrical talents.

On the lyrical tip, J-Live gets high marks, as always. This album is particularly compelling because of the intensely personal mood it frequently adopts. J hasn’t necessarily shied away from personal topics on previous releases, but he has developed this side of his repertoire much more over his decade or so in the rap game, and “Then What Happened” expands on this theme in a number of ways. J-Live’s latest also finds him highly reflective, of both his personal and professional histories, and this nostalgia (minus the rose-tinted glasses) colors much of the music. For example, multiple songs reference past J-Live tracks with both fondness and bitterness over the course his career has taken.

On the opener, “One to 31,” he rehashes his experience in the business of rap music in the form of an interview, answering such questions as, “Did you receive gold [from your record label]?” with an emphatic, “NO,” which is sliced and chopped up by DJ Jazzy Jeff, whose beat of swaggering horns sets the album off on the right note. Later, on “It Don’t Stop,” J-Live provides scratches of one of his own classic lines for the hook over Yallzee’s xylophone-infused beat, promising to “drop a trail of jewels that lead to a time where conscious is cool.” He rounds out his trilogy of “thirds” with “The Last Third,” where he recounts the break-up of his marriage in poetic terms that are at once lyrically lofty and poignantly down-to-earth. When he expresses his desire to “stick out my chest and flex my back to make a tough hard bread for a broken heart sandwich,” you understand in multiple ways the coping mechanisms he is describing. The most incisive of these autobiographical tracks is “Be No Slave,” which runs down the story behind his list of grievances against the labels that pimped him early on. He draws an astute parallel between predatory record label practices and slavery in the first verse, but when he expands this to include the new play of old stereotypes on the second verse, he really hits home:

“It’s simple and plain, we makin a change
And breakin the chains, and takin the reigns and saying giddy-up
No more free labor, you better divvy up
You’re fuckin with the wrong one like chlamydia
And I’ma come back, burn your whole committee up
J for Vendetta, blow the whole city up
So fuck a demonstration, seekin reparations
That’s why some felt better off during segregation
We still mingle with others but it’s deeper cuz
At least back then we knew who our people was
House niggas in the field keep it real now
The big black buck got sex appeal now
A bad motherfucker, shut yo’ mouth
Stay focused on your deep-seated penetration
Stay thuggin for a whole ‘nother generation
Poster child for your own people’s denigration
See I lost patience, the Underground Railroad’s at the last station
Denmark, Vessey Avenue
You’re very welcome, I ain’t even mad at you
Just G.W.A., God Witta Attitude
We ain’t duckin sunlight, we ain’t runnin
We gon’ stand and fight, kill and die for ours
Look ’em eye to eye equally behind the trigger
And tell ’em, now feel free to call yourself nigga… nigga”

It’s this kind of skillful display of sociopolitical analysis intertwined with a poetic mastery of language that has earned J-Live his reputation as an elite lyricist, and he drops repeated reminders throughout “Then What Happened” in case you missed it the first time around. Not every song is on a consciousness elevating mission, though, unless you count the nirvana often achieved through J’s rhymes. A number of tracks are simply about J-Live himself and how dope he is on the mic. “The Upgrade” features a dream collaboration with De La Soul’s Posdnous over a healthy portion of chopped soul vocals served up by Oddisee, whose own guest verse surprisingly holds up quite well next to these two rap heavyweights. J links up with Jurassic 5 fam for “The Zone,” which boasts a bouncy beat of electric keys and hand claps by DJ Nu-Mark and some scorching guest raps from Chali 2na (when is that solo album coming??). The two MCs trade verses about tearing the club up, with J-Live taunting, “He gon’ hate it when he hear me in the club / (Why that?) Cuz I play what the fuck I want!” When he promises to “blend Juggaknots with Jay-Z,” you can’t help but smile.

For the most part, the beats provide J-Live with a soundscape deserving of his lyrical gifts. DJ Spinna contributes a soul banger for “We Are!” that allows J-Live to adopt a bouncy, carefree flow to fit the syncopated vocal sample. DJ Evil Dee absolutely laces “Be No Slave” with a snappy bassline and another choice vocal sample that gives J plenty of room to vent. There are very few tracks that really disappoint musically, the most obvious being the odd time signature and incessant drums of “What You Holdin’?”. Yet even here, J-Live manages to salvage the track somewhat by proving what an amazing flow he has, darting in and out of this strangely phrased musical backdrop with seeming ease. “The Last Third” also falls short, with some farting synths that occupy way too much of the musical space. Overall, though, the beats are merely there â€“ they don’t detract from J’s vocals, but they don’t tend to add a whole lot, either. The slow paced “Simmer Down” eventually builds into a moderately interesting track; the Spanish guitar vibe of “Ole” is entertaining if inoffensive; and the unique keys melody on “Oowee” isn’t really bad, but it does get old after the first verse. While the music keeps the momentum consistently moving forward, it isn’t the driving force behind the album, and perhaps the beats’ wallflower status is helpful in keeping the attention squarely on the master at work on the mic.

This album proves in spades that J-Live is truly an expert at his craft, still turning out lyrical masterpieces with a nonchalance that doesn’t hint at the skill that goes into penning such intricate lyrics. After being a clear victim of industry rule #4,080, J-Live is understandably bitter at his misfortune, but this turns out to be a good thing for his music, which he has used to channel his rage and develop searing critiques of the system that did him (and so many others) wrong. His diversity as an artist enables him to move beyond this issue in many ways, but it still comes across as the driving theme behind “Then What Happened,” and for good reason. This time around, the beats are handled well enough to elevate J-Live’s raps onto a short list of best hip hop albums of the year, where it can be expected to stay for the long haul.