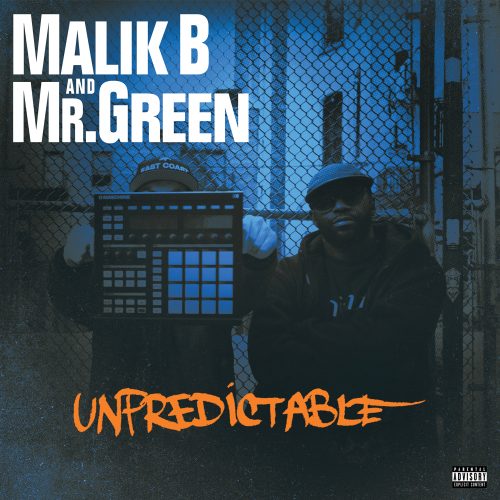 That’s right folks, Malik B of The Roots fame. This may be the next best thing as fans continue to yearn for a Black Thought solo LP, but it was just as much Mr. Green’s name on this new album that ensured I had to check this one out. Following on from his collaborative projects with Pacewon in 2008 and 2012, Mr. Green provides another short but sweet project, except there’s nothing sweet this time around. “Unpredictable” is an onslaught of tough, Timberland boot stomping Hip-Hop that harks back to the mid-90s when Black Moon and Mobb Deep were proving successful with beats that had (and still have) some of the hardest kicks and snares in the game.

At 36 minutes, the album flies by and (minus a cheesy hook) it’s a barrage of bangers throughout. “Unpredictable” doesn’t quite live up to that title, but this album is full of great diversions. I’ll get the one negative out of the way first – Nate Green’s hook on “We Gonna Make It” is corny. It’s saved by a sinister beat-switch from Mr. Green halfway through Malik B’s first verse, along with Malik himself sharing some passionate grievances of his. And that’s where this album shows it has legs – Malik B sounds rabid. The brutal introduction that is “Dolla Bill” is the perfect example, highlighting how Malik’s intense presence feels completely natural, and less excessive than label-mate Vinnie Paz.

“Devil” is merely a drum loop with a grim violin popping up now and then, ensuring that Malik B’s vocals are the focus. The viciousness of his verses are worth the admission alone. “Tyrants” is similarly irresistible, but does lose some momentum as Malik B implements a Caribbean accent while nattering away. Yet, this album puts the emphasis on how you rhyme, not necessarily what you rhyme about. Malik B mentions that he is from a different era and this record has the essence if not the feel of twenty years ago – it’s certainly not the dated 90s throwback so many underground rappers continue to worship.

Where Mr. Green laced Pacewon with piano-heavy loops that suited his light-hearted rhymes, the decision to grant Malik B with thumping kicks and snares reminiscent of The Roots’ earlier work on albums such as “Illadelph Halflife”, is a great one. If you wish to pick up an album that’s nothing but hard-hitting Hip-Hop and isn’t fussed with forcing authenticity down your throat, add this to your collection.