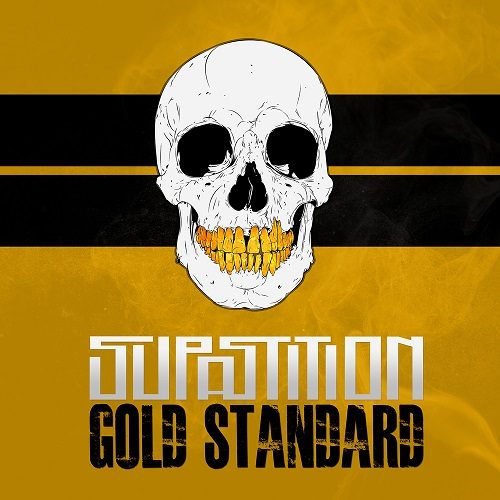 The working man’s rapper, Supastition, returns with another solid album jam-packed with meaty beats and direct rhymes that he is claiming as “Gold Standard”. It’s an apt title, as not only is Supastition a reliable emcee who regularly delivers quality Hip-Hop music, he’s an artist who knows his strengths and boundaries. While some rappers would have preferred to associate themselves with platinum or diamonds, gold reflects the classic, classy yet realistic status the NC representative embodies.

I’m never going to afford anything made of platinum that countless rappers still seem fascinated by, but gold I can (and do). Supastition thrives on this relate-ability that unfortunately finds him thrown in to the dreaded ‘real Hip-Hop’ bracket. Where he rises above others is in his honesty, and how he raps with pride. Previously mentioned on last year’s “Honest Living”, there are further rhymes declaring how proud he is to be a working man on songs such as “Know My Worth”.

Recent albums have shown a more mature side to the man also known as Kam Moye, and “Gold Standard” is no different. Where his earlier work may have leant more on spitting bars about spitting bars, this album is full of tracks with something to say. Just as J-Live recently shared his thoughts on the issue of racism and police with itchy trigger fingers, Supastition shares how he feels on “Black Bodies”. He claims to not feel like America is his home any more, which is striking when you consider that Americans are well known for being blindly patriotic. That of course is a stereotype, but to hear rappers taking America’s name in vain only helps highlight to the world how bad racism is in the so-called land of opportunity.

Where many choose to simply diss the police or call out Barack Obama, some feel foreign in their own country. The fear Supastition feels is transmitted in to “The Day After”, a track that sees the now-Atlanta based emcee ponder what would happen if he did die suddenly. The similarly depressing theme of growing up too quick is covered on “End of Forever” along with some classic Outkast scratches. Supastition talks about how teenagers desperately want to be older, but once you’re in your 20s, you will yearn for the stress-free days of adolescence.

The Kenn Starr collaboration “In-Crowd” is a potent track with a noggin-nodding production from Rik Marvel that sees both emcees throwing some digs at those try-hards who pander to what’s popular at the expense of friends and dignity. The one song I had mixed feelings towards was “Unorthodox”, where the line “I don’t do club raps, I’m above that” felt a bit snobbish. Nobody goes to nightclubs expecting the DJ to drop some Binary Star or Chino XL, and this felt like a track that shows Supastition is proud to be different, despite the anti-club rap mentality being something hundreds of rappers are shouting about. He is different, but it’s because of what he does rhyme about, not what he doesn’t.

Considering that Supastition writes reviews of his own concerts (and in one admits that he forgot a verse) is incredibly refreshing. “Gold Standard” embodies the authenticity of his persona, and thanks to a well-honed, potent delivery and some punchy, satisfying production (particularly from Praise) Supastition has demonstrated why his discography is one that should be respected.