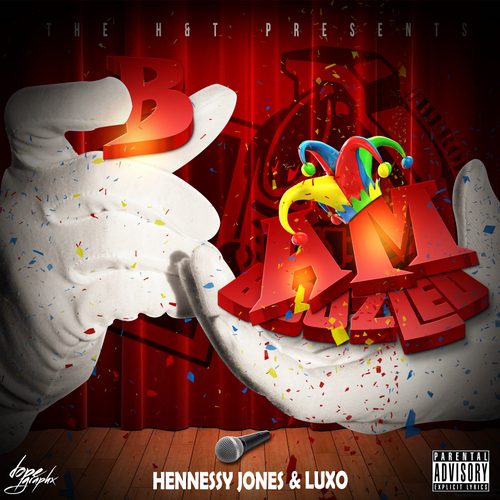 Hennessy Jones and Luxo hail from the “Heroes & Terrorists” collective, which is spread out from Pittsburgh to Atlanta, although five of the six crew members (including the two featured here) are Steel City natives. The name “Bamboozled” caught my attention immediately, as I thought it might be an attempt to expand upon the Spike Lee film of the same name, which although poorly reviewed and ultimately unprofitable was at least an attempt to both address and mock the exploitation of black artists in the entertainment industry. Thomas Dunwitty’s speech about being “more black” than his black protege Pierre Delacroix is eerily reminiscent of an infamous backstage incident between “Freebird” Michael Hayes and “The World’s Strongest Man” Mark Henry in WWE – but I digress.

Unfortunately I got the wrong idea about Henny Jones & Luxo from the jump. That’s my own fault for assuming the album would in any way be related to a film few people have seen and even fewer have fond memories of. Luxo’s rap on “Last Call” is in fact typical of most of what passes for mainstream hip-hop in 2015, embracing the values of YOLO without any hint of satire or mockery.

“I was bent before I got to the bar – straight up
I looked around and laid my eyes on a star – no make-up
Seen Henny with her friend, I might just have the hook-up
Like tryin to work my chest, I knew I had to push up…
Right? I approached her like a gentleman
Told her she was beautiful, and every other synonym
Damn! Her body is the meanest
I know I’m drunk talkin but, that just means I mean it
Ha! She fell for it and I caught her
Her smile make me feel like Cupid hit me with a chopper”

The flow’s alright though. Luxo is a little high pitched, a little reminiscent of Wiz Khalifa mixed with Kendrick Lamar, and he’s a suitable rapper to open the weed track “Chief” as a result. It’s an unapologetic lift of TLC’s “Creep” but given that song is now over 20 years old I have a feeling few listeners will notice. Henny’s flow on the other hand is a nice counterpoint, a little reminiscent of early Mad Skillz but without the same amount of comical flair or punchlines. They are well suited to be a hip-hop tag team, distinctive enough that you can’t confuse the two, having a natural chemistry and camraderie together when trading off verses.

There’s nothing deep or profound about “Bamboozled.” Let me be perfectly clear about that. “Party Party” is exactly the level this group is on – they’re LMFAO with better lyrics and flow. Every now and then I’d look at a song title thinking “This is the one where Henny & Luxo are going to get serious” and then find out the song had no deeper meaning at all. “Shut It Down” featuring Alumni had that potential, but I made the mistake of thinking Public Enemy, much like I made the mistake of thinking the album’s title meant Spike Lee. Thirty seconds into the track I already knew the “shut down” in question was turning off the higher functions over the brain due to the potency of the THC in the marijuana they smoke. “All these nuggets in my bed look like Dragonballs” is as deep as it gets.

I don’t hate it at all. What tracks like “Thirst Trap” featuring Kyra and “Rent” lack in depth they make up for in thump (both produced by Cobannah) and would be suitable for any evening/weekend of getting turnt up. Luxo & Jones would fit seamlessly into a club mix with more well known artists like Jeezy and Juicy J without even missing a beat. With even the smallest bit of radio play or recognition I could see this duo taking off quickly, so their value as hip-hop artists is not to be profound, it’s to help you have a good time. It’s not going to change the world but “Bamboozled” might help you get your groove on.