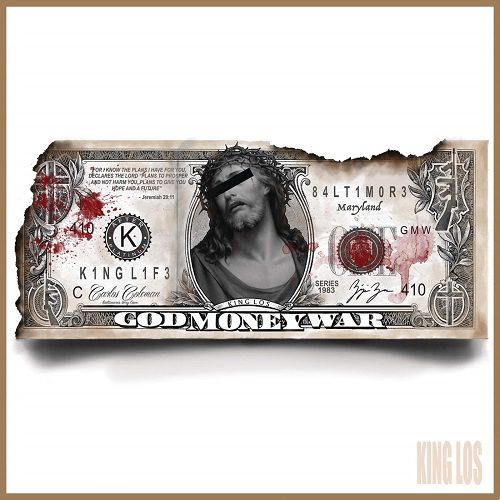 Bad Boy Records. The name is instantly recognisable, yet continues to polarise rap fans in 2015. It brings to mind names such as French Montana, Notorious B.I.G., Ma$e, Faith Evans, Black Rob and Janelle Monae, but it is perhaps most synonymous with P. Diddy. The shiny suit salesman is executive producer on “God, Money, War”, the first major release from Maryland rapper King Los, but the connections with Bad Boy stretch back to 2005 when he was signed to the label through his own imprint, Bloc Incorporated. The deal ended in 2008 due to legal issues, but Los was eventually re-signed in 2012 by Diddy. Then guess what? He left the label in 2014, following the successful release of mixtape “Becoming King”, which was well received by critics and fans alike.

“God, Money, War” is my first experience of King Los’ music, but there’s a definite Bad Boy feel to the album. R&B vocalists combine with polished if unspectacular production to form a professionally executed album that shows glimpses of what King Los can do. His vocals are reminiscent of a certain Mr. Lamar with the song “God, Money, War” feeling like a double-take moment at a key point on the album, just before it takes a different direction. What starts as a bass-heavy, mildly aggressive performance from Los, is eked out by Bad Boy’s traditional recipe for a successful album. R. Kelly, Ty Dolla $ign and even Diddy himself appear on a guest-heavy second half that fails to reach the levels it should do.

“War” is attention-grabbing and definitely a highlight, seeing Los attack the microphone in a manner that is unfortunately rare throughout the rest of the album. Balance seems to be a key theme, but it also feels like Los is trying to please too many different audiences. With the first third going all guns blazing, the second and third portions of the record suffer in comparison. Sitting somewhere snugly between annoying and infectious is “Glory to the Lord”, which is a thankful nod to the big man upstairs, for the expensive things that R. Kelly and King Los can afford. “I’ve got a rollie on my wrist, glory to the Lord” sums it up well, but for the most part, King Los doesn’t dwell on the materialistic side of success. There is a definite leaning towards having fun, following an intense first half that is the reverse to the usual formula applied on Diddy’s back catalog. The execution is mixed, with the track “Blame it on the Money” actually evoking memories of J-Kwon’s hit “Tipsy”.

“God, Money, War” is a good album but it never takes the risks that are needed for it to stand out, particularly this year which has been excellent for Hip-Hop. Just as Ludacris’ “Ludaversal” was solid and ticked all the boxes, it also wasn’t all that memorable, and King Los’ major label debut suffers a similar fate. It’s certainly worth a listen, but the ferocious tracks that kick off “God, Money, War” highlight a rhyme-animal that needs to be unleashed, not consigned to doing drab Hip-Pop with Ty Dolla $ign.