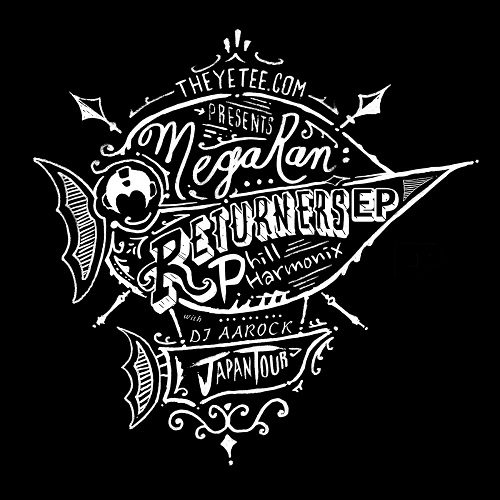 All proceeds of “The Returners” album go directly toward paying the expenses for Random a/k/a Mega Ran touring Japan, an admittedly clever way of crowdfunding if I’ve ever see one. It makes me wonder if there’s some way to crowdfund my own trip to the holy Mecca of video games, strong style wrestling, and late night yakaniku washed down with sake. Unfortunately I’m not much of an emcee, haven’t rocked turntables since my 20’s, and I doubt that a live concert of somebody writing reviews on a laptop will draw much of a crowd. The only thing I can do is watch Ran do it big from afar like the rapping and gaming superstar he is and try to live vicariously through the experience. You can too if you chip in – just name your own price.

My own failed ideas for how to crowdfund a Japan trip point out the fatal (fatality) flaw in any such endeavor – the product you’re selling has to be artistic enough that people want it. That hasn’t been a problem for Ran in many years though – he was already a good emcee back when he was just known as Random and has only continued to build up a devoted cult following over the last decade. Part of that following comes from the video game community, who have embraced his fusion of retro console classics and chiptune sounds with hip-hop beats and rhymes, but “The Returners” is by and large NOT that. This is a far more traditional rap album for Ran than many of his fans are used to, and only the fact long-time collaborator K-Murdock does a “Wanna Be” remix is a reminder of other projects – though I can’t even say for sure he looped a game for it. Actually I can’t even say for sure it’s on every copy of the album since it’s not listed on Bandcamp – the original version is though.

“I wanna be a better emcee, but mostly a better man
I wanna be better at calling my friends and fam
I wanna be less rigid and try to have more fun
Yet I wanna be more efficient and get more done
I wanna be mad at Ortiz, cause I thought he
specifically wrote that rap verse for me
I wanna be married with kids before 40
and wanna be around to see movies in 4-D”

And here we point out how Ran is clever again, because this song takes the accusation people through around about “wannabees” and flips it right on its head. It wouldn’t be very clever if I kept referring to this as a Mega Ran album, because Phill Harmonix is a fair and true half of the 42 minutes of music here. I can only tell you so much about him though since we’ve not reviewed any of his albums before this, and I only know him from previous collaborations with Ran and Savant a/k/a Stanstro among others. His lyrics are equally clever to Ran though and he makes a worthy partner-in-rhyme.

“I wanna be knowledge, incarnate, to those around us
And I’ll be damned if the hate ground us
I want renown and the status ..
I wanna touch my dreams, reach out and grab it
I wanna be the one the whole world feels impressed with
I need to find out what in the world I’m depressed with
I wanna be decisive, insightful, expressive
I wanna be the best at my chosen profession
If hip-hop’s answer, I wanna be the question
I wanna drop a song as hot as Nas’ +The Message+”

All songs are produced by DJ AAROCK, who brings a new sound to a Ran project, and perhaps a breath of fresh air if the video game inspiration was getting a little to same to some of the listeners. Drum tracks seem to be a speciality, as the snares and cymbals are very crispy on “Death to the Titans.” With a song named “Woo!” I expected him to sample wrestling from the glory days of Ric Flair, and the intro of the song did not disappoint me in that regard.

AAROCK has a whole variety of styles in his arsenal, from the somber and thoughtful “Call of the Wild” to the boom bap heavy “Epiclesis (The Gift)” which periodically reminds me of Black Sheep’s “The Choice Is Yours” thanks to the loud “UHH!” stabs. It all works though – I can’t say AAROCK made a bad choice anywhere on this album. I can’t say Ran made a bad choice in partnering with Phill Harmonix, or vice versa. Most of all I can’t say you made a bad choice if you throw a few bucks Ran’s way to support the Japanese tour he’s on right now. Do it and then live through it.