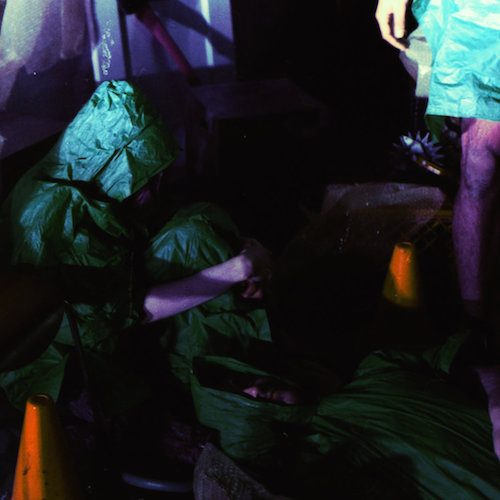 “If Brian Eno made hip hop, it would sound something like this.”

Don’t feel bad if that name doesn’t ring a bell. I had the vaguest notion in the back of my mind that I had heard of him and/or should know who he is, but I had to give up and resort to Wikipedia to confirm he was a famed creator of ambient music. He produced three albums for Talking Heads and seven for U2, which means I really ought to care more about who he is, but I grew up listening to Run-D.M.C., Styx, Michael Jackson, Duran Duran, Whodini, N.W.A and Public Enemy to name a few. The only relevance either group had to me was when one of their singles charted in the Top 40 and I had to listen to their music as I stood around at a school dance, awkwardly waiting for the whole experience to be over so I could go home and listen to music I liked a whole lot better.

For the uninitiated “ambient” refers to production that has a big, airy feeling. It’s not about heavy bass thwomps, hard hitting drums, or hooks that crash into the verses and vice versa. Some would say ambient is “atmospheric” or “formless.” You might think of it as music you could meditate to. It’s there but it’s not. It wraps around you but doesn’t force itself onto you. Does this sound contrary to almost every example of hip-hop music that you can think of? Yes. There are a few isolated instances of rappers who have tried to embrace the ambient notion of hip-hop such as P.M. Dawn with largely mixed and occasionally controversial results. It seems like an interesting experiment that’s almost by necessity borne of a middle class, college educated background. To put it another way, M.O.P. doesn’t make ambient hip-hop.

As review collectives go RR is a pretty open minded bunch though, so I decided to give Pseudoubt’s “Where Nothing Grows” a spin. I have to say based on my limited experience with Brian Eno, U2, Talking Heads or ambient music in general that the comparison in Pseudoubt’s press release was apt. It’s so apt in fact that I can’t pick a single song out of these 17 tracks and say “That sounds like a perfect choice for a single.” There’s absolutely no question these are mood pieces, introspective rap tracks over ambient beats, a questioning and self-searching existential journey. “Nourishment, appears in many forms/wouldn’t we be hardly justified, in expecting each and every one/to taste this sweet as honeysuckle?/The natural scale is top heavy with poison.” That’s the density of philosophy you can expect on songs like “Feathers For a Catch” featuring Shatter The Primate.

You might describe “Where Nothing Grows” as hip-hop music for an acid trip. Then again you might not because I’ve never actually tried acid, though I’ve been told that ambient music, Pink Floyd and Grateful Dead records really bring out the essence of the experience. I have to imagine that’s because when you’re expanding your mind to new experiences, heavy bass and clever punchlines would shatter your trancelike state and bring you back into the now and disrupt your journey. If you’re the type of person who likes chemical experiences Pseudoubt may be the rapper for you. He occasionally delves into less ambient forms, such as a very 8-bit electronic breakdown on the aptly named “Gone Poly,” but most of his songs are big and broad paintbrush strokes. You’ll see a few familiar names here and there. Onry Ozzborn shows up on “Creature of Habit,” Kristoff Krane guests on “Archangel,” and Myka 9 has the best cameo of the whole project on “One Place.”

Your mileage will vary widely on “Where Nothing Grows.” I can’t say there’s anything about Pseudoubt that’s hateworthy, unless you find his occasionally monotonal rap style tedious, although his train-of-thought lyric construction does draw me in. He seemingly raps whatever comes into his head regardless of rhyme, but it does have rhythm, and it suits musical styles of his friends Adriatic, Artifex and Riley Iris well. Can you bang your head to it? No. Can you thump your speakers to it? No. Can you shake up a residential neighborhood by driving around to it at high volume? No. If rap was in need of a thoughtful, introspective, ambient rapper though, Pseudoubt just might be the guy to fill that niche.