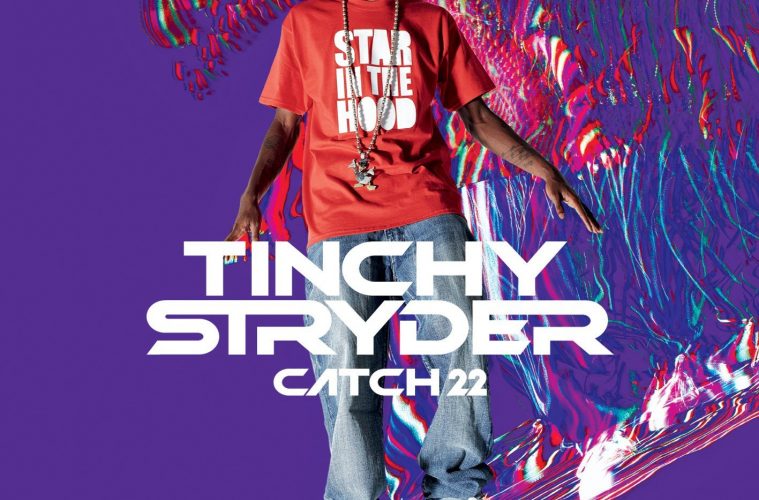 Another big UK hip hop/grime release with massive crossover potential drops this week, and, for once, it should prove to be a big seller. Let us get geeky over the charts for a moment. First up this year was N-Dubz, with a solid enough debut jam-packed with all their successful hits. It just missed out on a Top 10 spot, but sold incrementally and consistently over a sustained period of time, which equals success â€“ and they have certainly set themselves up nicely for their sophomore effort. In September, Dizzee Rascal â€“ who has already charted Top 10 album releases â€“ will put out “Tongue’n’Cheek,” bolstered by two number one singles (plus another song out next week that will probably hit the top spot). Dizzee’s album will rule the charts, no doubt. In between them lies an interesting effort from Tinchy Stryder who, by the end of this year, is sure to have had four songs in the Top 3. Initial sales of “Catch 22” seem promising for a Top 10 entry, and that is good enough.

Now that statistical data analysis section is over, let’s focus on the actual album. The 22 year old Londoner â€“ ahhh I get it now, “Catch 22” (plus, you know, it’s a book) â€“ has an overly long album with a bunch of radio friendly hits and a few street records. In fact, to call this hip hop or grime is almost completely inaccurate: this is more like pop-dance with a bit of inoffensive rapping over it. As a lyricist, Tinchy is somewhat lightweight, but he possesses a decent flow, a good voice and a malleable personality. In fact, everything here is particularly middle of the road (in the traditional MOR sense, with an urban twist â€“ maybe Middle Of the Street). It is a generally pleasing listen, but after a while it all seems a touch cynical.

It seems to have been directly aimed at young girls â€“ the ones that want to dip their toe into UK grime and hip hop to look cool, but not actually go for a swim. It obviously has a few tougher songs, which in reality are barely hard enough to crack an egg. You may notice that I haven’t referred to Tinchy putting the album together himself â€“ that is because he blatantly hasn’t. This has clearly been laced by a “team” that have analysed what makes US urban crossover music successful, and then aped the shit out of it. Who is that Timbaland guy? Yeah, yeah make a record like his. T.I. seems quite good â€“ copy that one of his. Who can rap well to women? Whoever, fine â€“ push the button. And that is basically how “Catch 22” has been formulated.

Whether this is right or wrong isn’t actually that relevant â€“ most of your favourite artists on major labels are subjected to this exact treatment. Dangle a carrot and they will make a song to start a dance craze. Promise a pot of gold at the end of the rainbow, and they will rap about money/girls/bullshit. Although this is an “autobiographical” album where most of Tinchy’s verses are all about him, you learn practically nothing of any interest about him over 18 tracks. Don’t get me wrong â€“ songs like “Take Me Back” featuring the excellent Taio Cruz, “Number 1” featuring N-Dubz and “Stryderman” are melodic and catchy, formulaic but fun. Of course, this is his major label debut â€“ so it has to be inoffensive yet edgy enough to turn off parents. But another prototype for the future, Chipmunk, shows up on “We Got Dem” with a nonsensical, incoherent verse. For someone so young with so much promise, he seems to be having all his interesting facets ironed out by the major label he has just signed to. Critical acclaim is an alien concept within UK urban music, only numbers talk. That is a damn shame, because this promising generation of talented artists will be blitzed into blandness.

I was initially going to recommend to all the readers around the globe to listen to “Catch 22” if you want to accurately measure what is going on in the UK commercial urban scene. But, after listening to the album a few times, I would feel a bit of national shame in doing so. You see, there is nothing wrong with going for commercial success, sales, topping the charts. It is a fantastic achievement. Yet, what isn’t acceptable to me is when a major (label) album is so lightweight and without ANY kind of meaning, reason or rhyme. These labels are trying to extinguish any kind of personality from urban music in some sort of Holy Crusade against character. Thank fuck that Dizzee is now releasing his shit on his own label now â€“ he may be chasing the top spot, but he is doing it his own way and using TALENT like Calvin Harris or Armand van Helden to make weird/wonderful songs. DJ Ironik’s album was appallingly uninteresting MOS dross; N-Dubz come across as an amazingly independent “in-house” outfit that have risen from the slums, yet they were propelled by a major and a pre-existing lineage in the music industry; Tinchy Stryder’s LP is packed with hit singles, an admirable feat in itself. Yet there is no ambition other than to have success: no artistry or subtlety, just a big black hole. There are positives about this album, no doubt â€“ but anything good has nothing to do with the artist himself. And that isn’t because he is young or rubbish. No, Tinchy Stryder has been surgically removed from the successful little shiny disc that bears his name, and if he ever puts just a single foot wrong, he will be chucked onto the ever-increasing scrapheap â€“ he really is in a “Catch 22.”