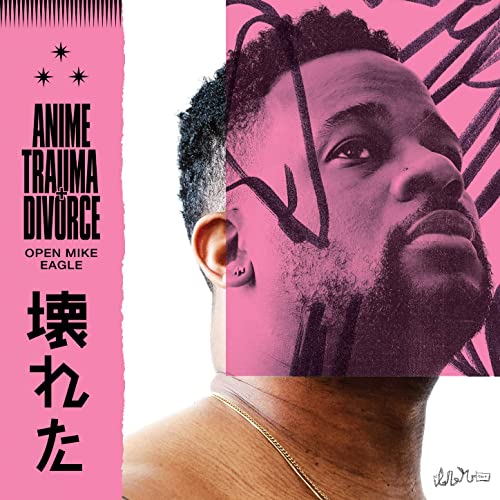 You thought you had a bad year? In the space of just a few months in 2019 and 2020, Open Mike Eagle’s, television show, creative partnerships, and marriage all fell apart. He went from being on the top of the world to being at square one struggling to pay rent. Comedy Central decided to not renew his TV show “The New Negroes.” Hellfyre Club, a collaboration between Open Mike, Nocando, milo, and Busdriver, fell apart. To add insult to injury, an episode of the show “Black Mirror” made Mike and his wife of 14 years realize their relationship was over. His therapist advised him to document his feelings, and so “Anime, Trauma and Divorce” was born.

It all starts with Mike laying out the cycle of abuse and trauma on “Death Parade”:

The album immediately goes into the Black Milk produced “Headass (Idiot Shinji)” where Mike makes clear that he is culpable in all of the mishaps in his life, and calls out his own tendencies to overruminate. On “Sweatpants Spiderman” he describes moving into a bachelor pad, working on his dad pod, and reading Rob Liefield’s X-Men comics.

You might be thinking that an album of someone journaling through their trauma might not be how you want to spend 34 minutes and 24 seconds, but what if I told you it was also about using anime and comic books as a power fantasy? Open Mike Eagle’s trademark humor and irreverence keeps things from getting too heavy or maudlin. There are a ton of jokes and references to comic books and anime to offset the very real human drama he’s describing. One of the best examples of this is “WTF Is Self-Care?” which skewers the self-care industry as Mike tries aromatherapy, bubble baths, and yoga and finds that none of them work for him.

He can also be serious when he needs to be. One of the most powerful tracks on the album is “Everything Ends Last Year,” about his Comedy Central show being canceled and Hellfyre Club imploding. In a few sentences he conveys the sense of loss he has from the death of these projects.

“We thought we were so clever,” he raps about his TV show:

“Just put me on a TV screen cuz pop culture’s forever…
We heard we wasn’t performing, we heard it wasn’t resuming
And it ended
It fucking ended
Just like that
It’s October and I’m tired.”

With regards to the Hellfyre Club he describes:

“Our friendship’s have been ruined
Good brothers in arguments about money, data and music
…
And it ended
It just fell the fuck apart.”

The track is set to a sparse beat by Caleb Stone that makes it almost sound like a scene from a documentary.  Stone produces three other tracks on the album, with Loden, Franke Leone, Black Milk and electronic producer Gold Panda handling the rest of production. There is a woozy, off kilter feel to many of the beats which also helps counterbalance the intensity of the subject matter. Some of the beats are so skewed that they took me a few listens to get used to, like the dissonant “Black Mirror Episode.”

To my ears, the only misfire on the album is “I’m A Joestar (Black Power Fantasy),” which I found irritating both in the beat and the repetitive lyrics. Everything else landed with me, even the somewhat filler closing track which features a live recording of Mike rapping with his son. The track takes some time to take off, and the recording isn’t great, but hearing Mike and his son go off makes up for any lack of audio fidelity.

Musically “Anime, Trauma and Divorce” continues Mike’s streak of making quality hip-hop. Lyrically, Mike nails the sweet spot of talking about mental health in a way that felt empowering. He takes responsibility for his own actions without coming off as self-flagellating, and it never feels like he is wallowing in his misery. I appreciated his honesty and humor, and I found this album helping me make sense of the past year even if I’m not going through nearly the same stuff he is. All in all, it’s a great album and Open Mike Eagle remains an important artist.