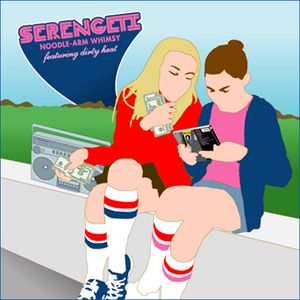 One of the things that draws people to big cities is the chance to interact with a diverse selection of people. Whether it’s ethnicity, culture, interests, or social class, opposites will interact and try to feel each other out. The Windy City is no exception and Serengeti dives into it with his new album “Noodle Arm Whimsy.” He exposes the world of the self-conscious upper class through the eyes of the hapless Noodle Arm Whimsy.

Within the first 30 seconds of the CD you’ll be smiling. As hard as it is to still find comedy in Arnold Schwarzenegger impressions, the dramatic pleads of “come onnn” and the hysterical laughs in the background will force a giggle or two.

“Pilates,” or the special breathing exercises that target deeper muscles, usually the abs, kicks off with a playful beat produced by Serengeti’s brother. In fact the mesh of robotic sound effects and video game synthesizers combine to create perhaps the most impressive beat I’ve ever heard from an 11 year old. DAMN! The learning curve has changed. The only thing I was successfully producing at that age was turkeys cut out of brown construction paper. Serengeti reveals himself as a character with the slightly slurred Chicago accent (think Common meets Quasimoto) and the occasional, grinding moans he raps with.

“Like fat women do pilates
and always talking that they notice wonderful changes to their bodies
hahahahahaha—jokes!
The only way you lose weight
Is if you start to smoke coke
Cuz I be at your mix parties
Where wives have face jobs and husbands drive Maseratis
And kids say to their mommies
– uh, I’m so bored I don’t wanna go skiing!”

Later on in the album, we catch a glimpse of just how important and technical the contact of sun to skin really is. Not in a cancer precaution way though, more of a “my assistant Jasmine is flawless, she sautÃ©s me” type of way in the comical “Tanning Season.” Whether it’s coconut peels for pores or wintering in Brazil, the crown for Top Tanner burns in the fiery eyes of the competitors.

The laid back, smoky bar jazz guitars on “Rhymes” features the Chi-town MC caressing the instrumental with smoothly delivered, some-what absent minded lyrics. The combination of random songs like this mixed in with a concept album, the standout personality/ risky deliveries, and even the cartoon cover art draws similarities to a certain masked underground villain.

The quality songs keep adding up with the laid back, nostalgic vibes on the self-produced “F5 Messageboard”, the catchy “Minnesota” and the food wasting storytelling of “Eat One Tossers.”

“Noodle Arm Whimsy” takes a step into the unknown and leaves us with a newly known fact. This album is tight. Granted, some things seem so personal, or maybe so fabricated, that it’s not always easy to tell what realm you’re in or even who exactly the narrator is supposed to be. But the musical consistency, the original concept, and the personality of Serengeti is undeniable. He joins the likes of Qwel, Diverse, Longshot, and Juice to make Chicago’s underground hip-hop scene one of the most contrasting around. However when diverse cultures mix, the results can be great. This album is proof.