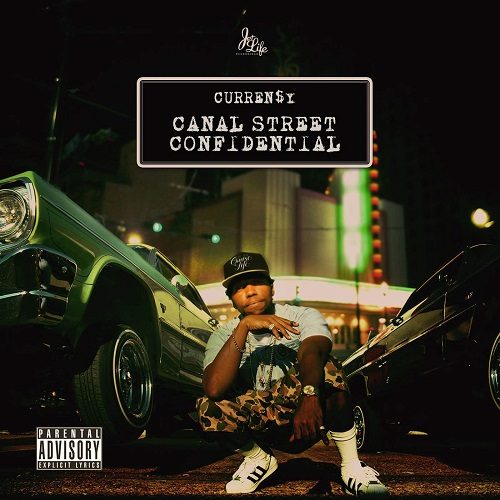 Taste and talent don’t go necessarily hand in hand in hip-hop, but taste can get you just as far as talent – if not further. Curren$y has exhibited both. Visually, his releases are like coffee table books. Items that look good on your computer and in your cloud. Sonically, they follow the same aesthetic. Songs like big soft cushions to sink into and embrace your inner Buddha as you follow Curren$y’s high-life hustle. Musico-historically, he’s in good company, fulfilling one of the key functions of rhythm and melody – distraction. At the same time he often succeeds in marrying his material ambitions with artistic ones.

The New Orleans native takes pleasure not just in the finer things in life but also the finer points of life. By seasoning his claims with realistic day-to-day observations, he actually became more believable than the typical big dreamers of rap who often live in a world of their own. As rare as he may be as a rapper, though, he hasn’t made himself exactly rare. His release schedule remains busy with different formats. 2015 alone saw four of them – “Pilot Talk III,” “Even More Saturday Night Car Tunes,” “Cathedral” and “Canal Street Confidential.” The latter comes across as the most old fashioned, not because it was the only one to be released on CD, but because it has the appearance of being Curren$y’s most commerically ambitious release to date. The impression isn’t completely false, even if there’s really only one obvious single – “Bottom of the Bottle” with August Alsina and Lil Wayne. But as Spitta enters the major label madhouse once more, he does so by his own rules.

Despite high-profile cameos from Ty Dolla $ign and Future, “Canal Street Confidential” feels authentic Curren$y. He particularly remains true to his sound. Unfailingly he turns to detailed, atmospheric compositions that set the mood for his ceremonial joyrides through nocturnal city streets. Imagining himself as someone with real power, Curren$y rules by gestures only. “Drive By” metaphorically murders spectators that witness Spitta Andretti’s motor show. “Ride by, kill ’em like a drive-by,” he quips, and Future joins him in the metaphor with “When I pull up it’s a murder.”

Like any item in Curren$y’s universe, Future’s husky Auto-Tune stylings aren’t exploited to the maximum. The album’s main producer Purps (of 808 Mafia, not to be confused with previous collaborator Purpdogg) exhibits not just attention to detail but also musical range. While “Drive By” has a gothic trap vibe to it, “How High” swangs in a southern way with guitar twangs that recall Pimp C’s work. Even though guest Lloyd has more mic time than Future, host Curren$y still dictates the house rules. He has a way of making you feel welcome and feel grateful at the same time, a method he often applies artistically in the songs that involve vehicles, women and weed. If you show yourself worthy, you get promoted to the next level. Perhaps it’s no coincidence that the song that details the program to be admitted into the Curren$y circle is called “How High”:

“First off, don’t be askin’ questions
If you gon’ ride, you gon’ ride, just accept yo blessings
Second step, watch how you flick yo ashes
If you can’t handle this gas I ain’t about to pass it
It’s a present to be in the presence
Every moment is precious, baby, let us cherish
Say what you feel, mama, you ain’t gotta be embarrassed”

But if you want to further rise in Curren$y’s esteem, you should avoid embarrassing situations:

“She look like Lisa Lisa, I’m gon’ take her home
Well, not my actual house, you know what I’m talkin’ ’bout?
We gotta work up to all that, see if you really down
Summertime we throw free parties, represent my town
My crew G’s, you stay cool and I’m gon’ bring you ’round
Play yo part, you gon’ earn a crown”

These are familiar rap motifs, but Curren$y manages to put his own stamp on them. He dwells long enough on the golddigger theme of “Everywhere,” but makes sure to refer to his own rags-to-riches background, to the point even where he labels himself “underground, so I understand what it’s like to feel like being slept on for real.” That he’s been around is evident from the ‘dope’ metaphors and social commentary (including an RIP to The Jacka) of “Speed.” He’s a traditionalist who musically reaches back well into the Rap-A-Lot Records catalog and who still channels the spirit of B.G. And yet “Canal Street Confidential” possesses enough modern audio accessories to position him at least immediately behind the forefront of the current scene.

In 2009 they teamed up for the landmark mixtape “How Fly,” and “Winning” is a well-deserved high-five between Curren$y and Wiz Khalifa, as well as a vintage Spitta moment, from Purps’ delicate tapestry to how carefully the rapper wields his pen when he talks about entrepreneurship. But that’s also where Curren$y stagnates. He does so many things right, why does his subject matter have to be so limited and the writing significantly less creative than during his peak? It’s a good thing the days when record labels had the say-so are largely over (at least for rap music). Arists are allowed to discover their strengths and are not chased out of their comfort zone in pursuit of additional audiences. In any case, Curren$y is too advanced in his career and able to keep his cool to let others interfere. Still, despite some rougher edges towards the end of the 40+ minutes, it’s impossible to ignore the relatively bland flavor of “Canal Street Confidential” and overlook the fact that the decidedly more intriguing “Pilot Talk III” only saw a limited edition release (so far). Possessing both taste and talent, Curren$y has the resources to not only stay his steady course, but occasionally excel his own standards with an exceptional release.