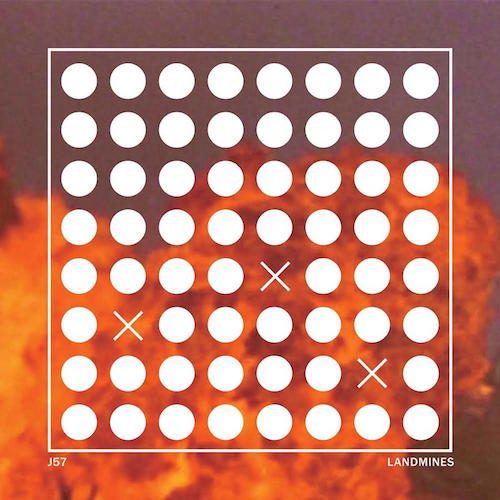 It feels odd to me that this is the first proper “solo album” I’ve reviewed from J57. He’s produced so many tracks for so many people over the years that I’ve just managed to convince myself there was a whole album by J in the archives somewhere. I looked though, and because I didn’t believe it, I looked again at the underlying source code just to be sure. There was nothing commented out and no missing links — this is legitimately J’s first solo album to be reviewed on the site.

It’s also not going to be the simplest review in the world, given that the prolific Brown Bag affiliated producer only gives up 20 minutes worth of his signature beats and melodies on “Landmines.” It feels like you’re done listening to it moments after pressing play — you start to dig the vibes and then they’re gone. That’s the tricky thing about a beat tape or instrumental album though — give people too much and they start to wonder if you couldn’t find emcees to rap on it, or give people too little and they start to wonder if you sold all of your best work and just compiled the leftovers for consumption. If you’re the “glass half empty” type of person you can spin it in a negative fashion either way.

I’m going with “glass half full” myself. As the aptly named “Art$y Bruh” illustrates, J57 makes money tracks but makes head nodding interesting melodies at the same time. Just when I had settled into the groove, J flipped things in reverse at 64 seconds, confounding my expectations but producing sounds that are just as fresh backward as forward. That’s not just “artsy,” it’s demented genius. I don’t trust many people to pull that off on an instrumental, but J is in a class few of his compadres can match. “Bravery” is another example of what I mean, and not just the reverses (a good coincidence that), but the way he layers up different jazzy elements and creates an atmosphere worthy of a smoky nightclub.

There’s also humor to be found in the instrumentals, which is normally something you rely on the emcee rhyming over them to create, but “Zach Morris Cell Phone” is a light and whimsical track that stands up all on its own. I also chuckled at the overly verbose title of “A Tale of the Time by a Lonely Man” before I even heard the first bar, since it probably didn’t need that elaborate of an explanatory name — and yet I can’t say that it doesn’t fit. The drums are crispy, but the mood of the keyboards is ever so slightly somber. It’s not depressing, but perhaps it is a bit lonely.

I’m happy to say that despite the short length of J57’s solo release “Landmines” really does blow up the spot in a nice way. I do get the feeling he held back a little bit and that maybe a track like “Vempire” was an afterthought or leftover, but out of eight songs it’s the exception and not the rule. J wins again.