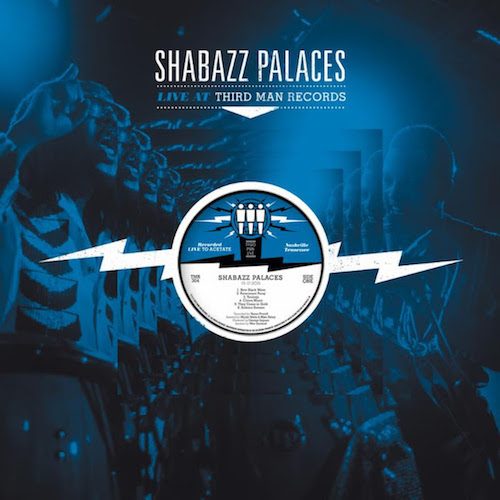 I’ve always found live hip-hop to be an iffy proposition. I’ve been to some amazing shows, but too often it is a guy shouting into a microphone over a backing track. There’s not much room for improvisation or spontaneity, which are two key components of a good live show. A recent Travis Scott performance on the Jimmy Kimmel show illustrates the worst-case scenario. He is shouting along to a recording of the song, not even bothering to pretend he’s rapping. Maybe I need to see Shabazz Palaces live to change my mind. Their “Live At Third Man Records” is definitely a strong argument in favor of live hip-hop.

One thing that sets Shabazz off from many hip-hop acts (the Roots excluded) is that it isn’t just a rapper and a guy on his laptop. Tendai Maraire plays congos and drums and provides backing vocal while Ishmael Butler raps between twiddling knobs and playing a drum pad. This allows them more room to improvise and go off script than a DJ only armed with the backing track. Also, their music isn’t built around samples or hooks, which means Butler isn’t having to rap along to a recording of someone else singing. It also doesn’t hurt that their music is nebulous, spacey, and more focused on sustaining a vibe than on pumping up a crowd or playing hits.

The tracks are mostly drawn from the Palaces’ two studio albums, especially 2014’s “Lese Majesty.” The duo isn’t afraid to build out the intros of the songs, to change up the lyrics and to take song in new directions. At best, the songs here have a warmth and energy that isn’t always present on their studio albums. “Forerunner Foray,” for example, has a sense of urgency that I don’t get from the version on “Lese Majesty.” Ditto the version of “Free Press and Curl” here. It abandons the intimacy and delicacy of the studio version, turning it into a party song.

There are also times when things get muddy and messy. Shabazz Palaces’ music is dense, and that denseness can come off as chaotic in the live setting. There are times where it feels like Butler is struggling to juggle rapping and programming. You can hear him lose his breath or lose his line as he fights with his laptop or drum machine. That is one downside to having a performer also doing programming – drum machines and laptops lack the elegance of a guitar or drum, and don’t work as well as live instruments.

As with all live albums, “Live At Third Man Records” loses something in its translation from live performance to digital document. It is still a worthy entry into the small collection of good live hip-hop albums. It may not be as great an experience as seeing Shabazz Palaces live, but it is a worthy substitute.