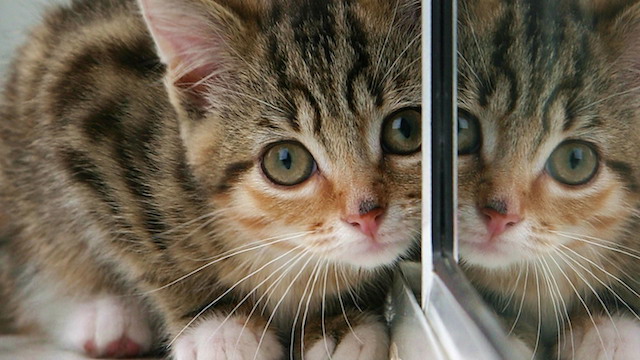 If you thought last week was bad it turns out that “alternative facts” was only the tip of the iceberg. In keeping with our new standard of giving you something pleasant to offset the ugly facts about Dumpster Fire Cheeto Puff Trump, here’s a friendly kitten and its reflection in the mirror. Picture a ball of yarn in your head and throw it, and watch the kitten pounce on it and bat it all around. It’s a happy scene. Nothing could possibly be wrong here. It doesn’t matter that the fabric of our country is being torn apart by a man who lost the popular election (and continues to lie and say he didn’t) – this cute little kitten is meowing at you for some milk. Unfortunately it’s time to shed this illusion and get back to reality.

On January 27th in the worst decision of his short Presidency to date, D.F.C.P. signed an Executive Order that’s being called the “Muslim Ban” for short. The order suspends the U.S. Refugee Admissions Program for 120 days and bars citizens of seven countries (Iraq, Iran, Libya, Somalia, Sudan, Syria and Yemen) from entering the United States EVEN if they hold dual citizenship, permanent resident status, or a green card. It also suspends accepting all refugees from war-torn Syria indefinitely. The humanitarian scope of the problem was immediately apparent as people already in the air flying here when the order was signed were detained at airports when they arrived and barred from entering the country, regardless of their circumstances, although federal judges have already issued rulings halting deportations based on the illegality and unconstitutional nature of Trump’s far overreaching action.

To the surprise of no one protests broke out immediately nationwide.

This Executive Order from D.F.C.P. can not and will not stand. Even though he claims it’s not a “Muslim Ban” he’s already stated that Christians will be given preferential treatment over non-Christians in the vetting process for admission to the United States, and I need not remind you that the 1st amendment states “Congress shall make no law respecting an establishment of religion, or prohibiting the free exercise thereof.” By signing an Executive Order that bans Muslims and favors Christians, he has in effect established Christianity as a state religion that is favored over all others. That’s just plain vulgar.

On top of that none of the countries listed in his illegal action have actually had citizens committing terrorist acts in the United States. 15 of the 19 hijackers on September 11th, 2001 were citizens of Saudi Arabia — the others were from the United Arab Emirates, Egypt and Lebanon. You’ll notice none of those four countries are on the travel ban. In the Boston Marathon bombing brothers Dzhokhar Tsarnaev and Tamerlan Tsarnaev were both naturalized U.S. citizens dating back to 2012, after their parents came to the United States from Kyrgyzstan in 2002 and claimed asylum. Notice a pattern here? The very countries that Trump’s illegal executive order targets bare no responsibility for foreign terrorism on U.S. soil. In fact I feel the need to state the obvious given how many people seem to ignore it — domestic terrorism (HOME GROWN TERRORISM) kills more people than foreign infiltrators.

Banning people from the United States on the basis of their country of origin or their religious beliefs does nothing to stop acts of terrorism and never can. However it’s not surprising that D.F.C.P. believes such a simple-minded approach can appease the minority of Americans who voted for him. He can claim to be keeping the promises he made on the campaign trail, even if those promises at best only pay lip service to impossible to achieve goals, and at worst plays into the hands of terrorist recruiters who can cite the Executive Order as proof that there is indeed a “holy war” and that the infidels of the United States hate all Muslims. All of the subtlety and nuance of President Obama’s administration has been thrown out the window, but if you’re not a fan of the former administration, how about we take a cue from President George W. Bush instead?

Donald Trump can’t even hold a candle to President Bush let alone President Obama when it comes to dealing with the realities of the global society we live in, and at the rate he makes enemies we’ll all wind up far less safer and more susceptible to terrorism than we ever were before.