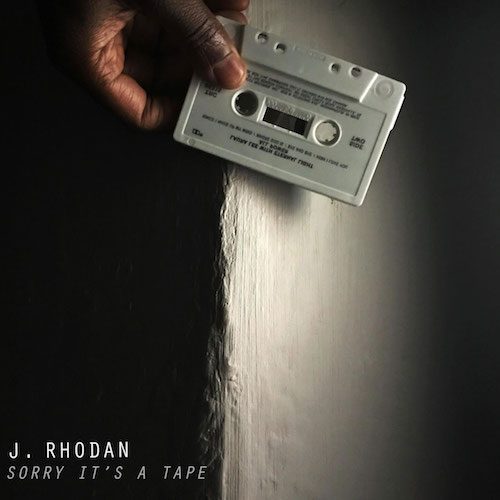 As luck would have it I just happened to have watched a Vinesauce video right before sitting down to review this tape, and one of the things that Vinny regularly does is play “corruptions” of video games. You can achieve this effect accidentally if you have an old cartridge that’s dirty when you put it in your Nintendo/Sega/Atari console – the graphics can be scrambled and the game can crash when you least expect it to. Vinny does it on purpose using an emulator and scrambling the game’s actual code, or at least that’s my impression watching his videos. Let’s face it – purposefully trying to ruin old video games just to make a funny video entirely by chance is a waste of time (and destruction of something valuable) when you can randomly inject bad code into a game and not have to strike paydirt by accident.

Anyway to make a long story short I recognized the intro of J. Rhodan’s “Ratatouille” right away, and even though you might think he’s referencing or sampling from the 2007 Pixar film, what he’s actually looping and chopping up is the intro to Nickelodeon’s “Rugrats” cartoon. I can’t say I’ve ever been a fan and that’s not because I won’t watch programming outside of my supposed demographic — it’s just because whenever I would flip to the show on accident I would find the way the characters were drawn hideous and disturbing, and their voice acting sounded like nails on a blackboard to me. It can’t be denied that the show was hugely popular whether it was my cup of tea or not, spawning a ton of merchandise as well as motion pictures and video games. It was one of those Vinny “corruptions” that featured a Rugrats game for N64, and each time he restarted the game for another hilarious distortion of their already distorted features, I heard the same song J. Rhodan sampled over again.

A lucky coincidence or I never would have picked up on the source of his loop. And that’s what “Sorry It’s a Tape” is all about really – J. Rhodan showing off his cleverness as one of the in-house Illect Recordings producers. He doesn’t have to apologize for making a tape though (even though I got a digital copy not a physical) because I still have all my old tapes from the 1980’s and 90’s and in fact cassettes are “in” these days as everybody gets nostalgic for their childhood. I MIGHT want an apology for it only being 11 minutes long though. Truthfully it’s not fair to expect more than that from a free beat tape though, and as a bonus we do get one actual rap on this release, as James Gardin drops in for “Q&A Freestyle.”

The downside of that is that it makes you want to hear more of the union of J. Rhodan with other capable rappers. “Sorry It’s a Tape” is apologizing for the wrong things. It could apologize for making me like dusty funky tracks like “Too Far” and then pulling the rug out from under my feet in only 74 seconds though. This sounds like some s–t Drake could be sing-rapping to but just as soon as you get into the groove it’s gone. In conclusion what I can say about J. Rhodan is that I’m only sorry there’s not more here to listen to.