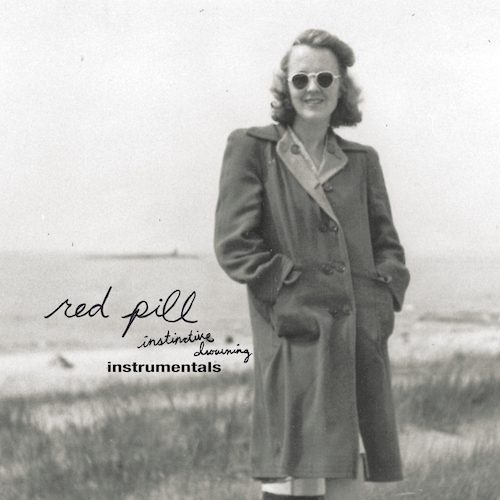 Here we have an interesting situation on multiple fronts. The first item on the agenda is that I somehow wound up with a promo copy of Red Pill & Ill Poetic’s “Instinctive Drowning

” but not the rap album itself – I received an instrumental copy of the project. The second item is that it appears this was available via Red Pill’s page on Bandcamp for a time, you can find Google links to it if you search, but when you follow them you hit a dead end because this release has been DE-LISTED. Therefore I’m put in the situation of sharing clips with this review of the original songs and not of their instrumental version just so you can hear what I’m talking about. Furthermore in some respects I’m unintentionally promoting something you can’t even buy right now. All I can tell you is that I’m taking what I’ve got in front of me and making the best of the situation I’ve got.

It’s actually not such a bad spot to be in. Red Pill is an incredibly talented cat, in or outside of his Ugly Heroes supergroup, and Ill Poetic is a double threat with both rhymes and beats. In this case he’s providing the latter, which makes him the focus of this review, while most coverage of Red Pill focuses on his intellectual melancholy as an emcee. Obviously you’re going to pick up on his skills as an emcee if you play these clips, but on this review riding through the world of beats, rhymes and life it’s all about the beats baby.

And oh what beats they are. “Gin & Tonic” opens with warbling and woozy instruments, blending and bleeding into echoing drums and a wailing trumpet, sounding like all the best parts of what “acid jazz” used to mean on me with the emphasis on “jazz.” I’m not prone to drinking gin and tonic very often – in fact I don’t even have either of the required ingredients in my home – but from experience I’ve learned that the two are completely intolerable on their own yet somehow magically delicious and intoxicating when combined. That would be a terrible metaphor for the partnership between Red Pill and Ill Poetic as they’re both great on their own, yet undoubtedly they too are more than the sum of their parts when combined. I can honestly say the instrumental stands up on its own though. It actually makes me want to have a drink and sink into the musical vibes as my brain disconnects from higher thoughts.

One might argue that it’s cliche for the sounds of ocean waves to crash onto the shores of the title track for “Instinctive Drowning.” My response would be that “cliche” != “bad” in all cases. As the waves recede into the distance of the song’s opening, you’re left with some big bass notes and the sounds of ivories echoing across a concert hall. Random voices pipe in without saying anything clearly audible nor do they need to. Sometimes a sound reverses itself for no apparent reason, as though you’re watching life under a microscope that seemingly organizes in one direction then changes course based on nothing but instinct. That’s what the instrumental to the title track is — organic and reactive. It just does what it should do at the time it should do it. The cymbals and snares bash their way into the scene, then abruptly vanish and leave the ocean waves lapping at your toes again. It’s a heady ride.

The “Instinctive Drowning” instrumentals are 46 minutes of tracks which evoke emotional responses without even saying a word. These songs are both familiar and odd at the same time. There’s something of a traditional boom bap to “The New Normal” and yet the clicking of the drumsticks breaks your head nod reverie and redirects you to the new age spaced out backdrop, only for the brassy sounds to bring you back down to earth. “When the Devil Knocks” doesn’t seem as menacing as its title at first, but it leads you down a primrose path where at any moment your next step could step right off the beat into an abyss. “Club Priviledge” is the track you’d play if you wanted to rattle the hell out of your car or home stereo speakers, but it’s not a “club song” in any way — just hard on the thumps. And “Jeffrey Star?” I can’t even do justice to what it is. It’s more like an anti-instrumental. It’s minimalistic to be sure but in a way that leaves you hanging on each note.

The bottom line here is that I feel bad gushing about an instrumental album that you can’t buy, but not so bad that I wouldn’t tell you to buy the regular version of “Instinctive Drowning

” to hear them anyway with the added bonus of Red Pill rapping over them. In time we’ll get to what he had to say but for now it is what it is and what the “Instinctive Drowning” instrumentals ARE constitutes great music. It’s all the great parts of A Tribe Called Quest and The Roots in audio form sans the rap, but you just know those raps are gonna live up to it in every way.