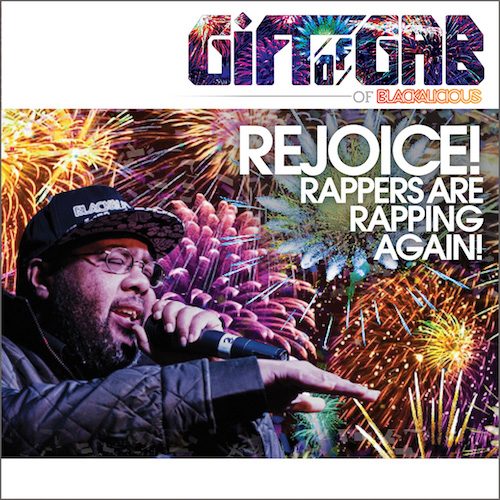 If you the reader were to create a list of the best emcees of the last 20 years and not put Timothy Parker b/k/a Gift of Gab on it, I would automatically find your list suspect. Four of his albums have made ourNines list of nearly flawless hip-hop releases, either as a soloist or a member of Blackalicious, although the distinction is as meaningless as saying “it’s either a KRS-One album or a Boogie Down Productions release.” They’re essentially the same thing. There’s no BDP without KRS, and as the only rapper in Blackalicious, an album without him would simply be a Chief Xcel beat tape — mind you I’d still listen to that. Gab can’t take ALL of the credit for why so many Blackalicious albums are on what you could call our “must own” list, but a dope beat goes so much further when you have an incredible lyricist on top of it. To put it another way it’s like the difference between Madlib producing an album for just anyone (it would still sound good) or producing said same for Freddie Gibbs or MF DOOM. Xcel is great on his own but he’s even greater with Gab, and Gab is simply phenomenal. He can deliver anyything whether it’s high speed tongue twisting lyrics, profound heartfelt emotion, braggadocious punchlines, you name it.

Unfortunately as long-time hip-hop fans are aware, being critically acclaimed or universally praised often doesn’t equal a lucrative commercial career. I’ve seen Gab get a few incredible deals over the years, such as doing a new version of his famous “Alphabet Aerobics” for Bleacher Report, but one good deal here or there is hard to compare to the kind of units that Future or Kanye can move, nor the kind of demand said same are in for cameos and remixes. In a fair universe Gab would be just as sought after. In a fair universe he also wouldn’t currently be suffering from kidney failure due to Type 1 diabetes. Now I never said I expected fairness — our boy Adam B has been on chemo and one of my best friends since college is probably going to wind up getting a liver transplant. It’s in the random nature of the universe that bad things will happen to good people and that s–t just sucks. Thankfully Gab doesn’t seem to have let his problems get him down in the dumps. In fact like the aforementioned KRS it appears that Gab is thinking LONG RANGE, launching his own Patreon campaign to fund an independent album that will hopefully release a year from now in 2018. He’s also still touring as an artist on both solo dates and Blackalicious gigs. Gab isn’t sitting around waiting for a transplant or fate — he’s making things happen.

“Rejoice! Rappers Are Rapping Again” just happens to be one of those things. The greedy will complain that it’s only 8 tracks long, approximately 30 minutes in length, while the benevolent will be stunned he only charges $1 to join his Patreon campaign to get the EP. You can of course jump in at a higher level, and earn extra perks that go along with it (your name and/or face on the new album, exclusive merch for supporters, all of the usual s–t), but if you’re cheap you get a half hour of music for less than a cup of coffee at Starbucks. Considering his challenges you might be surprised he’s being so generous, especially given the cruel twist that an uncaring universe has handed him, but if you knew none of this and just listened to “Abominable” you’d simply be happy that Gab was back again with his trademark lyrical inventiveness.

He’s also hitting literally close to home with “The Gentrification Song,” a track about how California cities are changing as real estate prices skyrocket and drive out the minorities that once made the up the hip-hop diaspora of the inventive Cali scene. He’s not condeming people who buy the homes and apartments, they need a place to live just like anybody else, but he can’t help but notice the complexion of his community changing.

“This ain’t the same place it was
Different space and buzz, no more dope fiends takin drugs
Thugs placin slugs in they enemies, mothers wakin up
only just to fall on both they knees, ‘Why’d you take him Lord?’
No homeless people gazing up, thinking vacant thoughts
Brand new condominiums sit where there was a vacant lot
And still surrounded by this calmness I feel shaken up
Nothing is familiar; feels like money took the place of love”

By the end of the song a despondent Gab notes that as the rich pour in and the poor get shoved out, the agenda seems to be to create a third world nation in his own city, while those lucky enough to escape the grip of poverty and violence never come back to do good in the hood. A “Gentrification G Koop” remix gives a more mellow musical take on the subject, but the biting lyrics about barbershops closing and white ladies fleeing in fear aren’t changed. That’s not the only remix on this short release though as there are two different versions of “Aspire,” one which opens with a militaristic call to action in the face of tyranny (which sounds inspired by the current political climate) and a “Loop Mix” that changes up both the beat AND the pattern of the flow in the manner only a talented orator like Gab is capable of. Here’s a mix closer to the original version.

I wish I had a full copy of “Freedom Form Flowing” to share with you — an all-star track featuring AFRO and R.A. The Rugged Man — or more than the album sampler above to let you in on the hilarious “Gabman” parodying the obvious similarly named caped crusader on the hook. Again though you can get this entire half hour of music for ONE DOLLAR. For somebody as good as Gab how can you really lose at that price? In another display of his noble spirit, 10% of all the proceeds raised from his Patreon will go to the National Kidney Foundation. No matter how little or how much you pledge you’re not just supporting Gab and getting good music in return, you’re actually doing some good to boot. That’s not to say you should just pledge to his Patreon and consider it “good enough,” but at least it’s a positive step in the right direction, as is the fact Gab is still making music despite the many daily challenges he has to overcome.