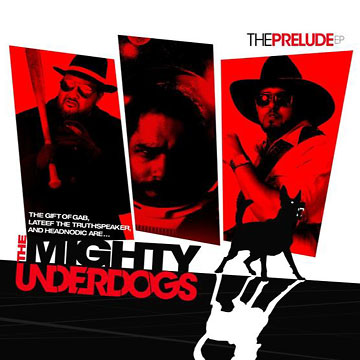 The Mighty Underdogs :: The Prelude EP

Gift of Gab and Lateef the Truth Speaker are underdogs in much the same way as the Kansas and Memphis men’s basketball teams â€“ anyone who really knows their stuff knows they shouldn’t be considered underdogs at all, yet they tend to fall by the wayside in the wake of the North Carolinas of the rap game. And just like the Jayhawks and Tigers, they consistently produce even as the bigger names start to fall off.

On “The Prelude EP,” Lateef and Gab team up with producer Headnodic of Crown City Rockers to whet your appetite for their forthcoming full-length LP “Dropping Science Fiction,” due out later this year. Featuring guest appearances from the likes of MF Doom and Ladybug Mecca, as well as scratching by legendary Quannum head honcho DJ Shadow, this quickie succeeds in priming you for future offerings and leaves you wanting more.

Things kick off with the thumping “UFC” as the United Flow Champions bob and weave their way around an unrelenting confection of pounding drums and precision cuts by DJ Shadow. The chopped up Clipse vocals capture the tone perfectly: “Who gon’ stop us? Not a goddamn one of ya.” The album’s strongest track is up next in “Gunfight,” which finds the Underdogs telling stories Old West style over a beat infused with spaghetti western touches, including twangy guitars, rattlesnake maracas, and Ennio Morricone whistles. The assist from MF Doom is neither needed nor appreciated here, as his flow never quite finds the swing of the beat and his free association rhymes pale in comparison to the vivid stories told by the other two MCs. “Lovelife” features a better guest appearance by Ladybug Mecca, whose whispered raps steal the show from the singing Lateef and Gab. “Status Symbol” boasts a laid-back samba rhythm with a sped-up vocal sample of “doo-doo-doo’s” over which the MCs spit wisdom about the shallowness of the chase for expensive name brands that people are convinced they need. The jazzy “Out Of My Life” sees the MCs portraying both sides of the wronged lover story over another effective vocal sample and steady rim shots from Headnodic. The album closes with the banger “Bring Me Back,” which hijacks an old school vibe both musically and lyrically, as fellow Crown City Rocker Raashan Ahmad shows up to glory in the good old days of backspins and high top fades. It’s your standard throwback track, but it’s full of rich details that transport you to this simpler time when dudes would “rock new kicks and call dibs on the last popsicle.”

This is an all-around solid effort from a group that probably couldn’t produce whackness if it tried. Gift of Gab is one of the best lyricists doing it right now, and Lateef the Truth Speaker is a pretty darn good MC whose biggest problem is that he always seems to be upstaged by collaborators on that next level. Rapping over Headnodic’s polished productions, they achieve an enviable chemistry that carries the EP. It might not blow you away as completely as the names associated with it might suggest, but it certainly gets you excited for the full-length project promised to be on its way soon. For an EP entitled “The Prelude,” that’s about all you can ask.