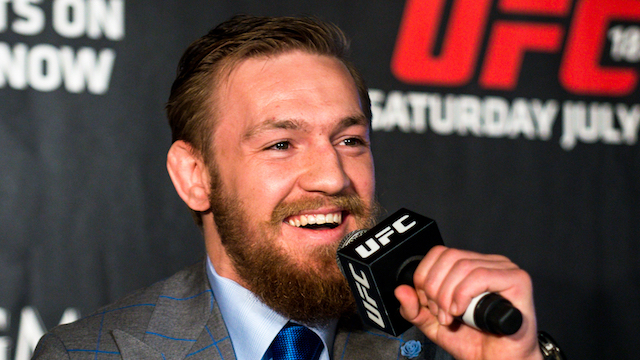 I co-host a weekly Wednesday night MMA podcast called Glove Up or Shut Up with my good friend Peter Harrison from Ottawa. We obviously don’t have the reach of a Sherdog Radio Roundtable (I’ve been on a few of those) but I’m proud of our five years of shows together and perhaps more importantly I enjoy a chance to talk to my Canadian brother from another mother each and every week. One of our talking points over the last few months has been UFC lightweight champion Conor McGregor trying to book a fight with Floyd Mayweather Jr. in boxing. Now given the way McGregor got to the position he’s in now, with four straight pay per views that did over 1.2 million buys each, and the rematch with Nate Diaz in particular doing 1.65 million, it’s not surprising that he’d campaign for a “mega fight” with Mayweather given his drawing power.

1.) Mayweather hasn’t had a fight in almost two years.

His last bout was a 12 round unanimous decision defeat of Andre Berto in September 2015. The victory extended his flawless record to 49-0, leaving many people to speculate he’d take one more fight to bump that record up to 50. It’s not as though there hasn’t been plenty of opportunity to do so in the interim, but for the now 40 year-old boxer the risks only go up while the rewards probably do not exceed the already massive paydays Mayweather has earned against Oscar De La Hoya, Canelo Alvarez and Manny Pacquiao. Mayweather is not the “take a fight just to take a fight” guy. He’s called “Money” Mayweather for a reason. 50 is just a number to him that doesn’t matter, unless it’s multiplied by a million and deposited in his bank account. That leads directly to my next point.

2.) UFC can’t afford to bankroll what these men would demand.

Can Mayweather be assured a fight even against a proven UFC star like McGregor garner him that kind of payday? Maybe on points for each PPV buy, but probably not up front money, especially if it’s WME IMG (the current owners of UFC) putting it together given the massive debt they had to finance to acquire UFC. They’ve not been in a massive “spend and acquire” mode since then. In fact they’ve been willing to let stars like Ryan Bader and Rory MacDonald leave for Bellator ever since the buyout. If it’s not WME IMG bankrolling such massive egos, then what boxing promoter is going to do so, especially when somebody like Conor McGregor is completely outside of their expertise?

3.) Speaking of egos, these two are never going to agree on ANYTHING.

The only thing that they might potentially agree on is to hold the fight at T-Mobile Arena in Las Vegas, the “home” of UFC in Nevada, in the city where traditionally the biggest boxing and MMA fights (with the biggest ticket prices) usually happen. Otherwise the laundry list of issues could make putting the Mayweather vs. Pacquiao fight together easy, and it took SIX YEARS to work that out. What level of drug testing will be done (blood, urine) and how frequently? What judges will score the fight, and would they be more familiar with MMA or boxing? What kind of ring would be used and to what specifications? How many cornermen for each fighter? And each will be advocating for an advantage for themselves at a disadvantage to the other, not the least of which is the aforementioned payday. They’ll never agree to a 50/50 split, and as much as McGregor might want the fight, he can’t keep himself in fancy alligator shoes giving the lion’s share to Mayweather.

4.) McGregor says he wants it but other than money there’s nothing in it.

If he loses a boxing fight against Mayweather it doesn’t affect his UFC championship status or promotional ranking, but if he wins he’s not going to become a boxing champion. If he loses then a 28 year-old in his prime got beat up by a 40 year-old nearing his retirement. If he wins then a UFC lightweight champion beat up an aging boxer, which doesn’t sound that impressive either. There’s so little for Conor to gain here, especially compared to the possibility he could earn a much better payday having a superfight with Georges St-Pierre. Since GSP’s fight with Bisping has been called off his dance card is certainly free to fight McGregor now, and to UFC’s fans that would be more intriguing than Mayweather. Even if McGregor loses THAT fight at 170 he still maintains credibility at 155.