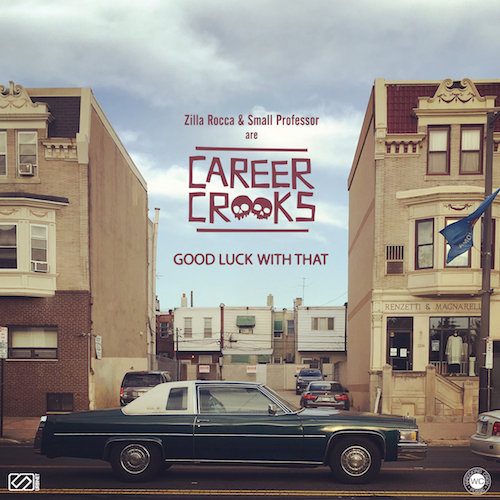 Career Crooks: Good Luck With That

Even though the name Career Crooks sounds like something brand new, it’s actually the union of two Philly rap veterans to get ahead collectively. Producer Small Professor and rapper slash writer Zilla Rocca saw the potential in linking up to produce something together, and the added benefit of being geographically close had to be a plus as opposed to a lot of today’s long-distance internet collabs. I can picture Pro and Zilla passing the bottle back and forth in the studio, taking sips and nodding their heads to the beats banging out of his speakers, then the smile growing wide across Zilla’s face as he says “I got the perfect rap for that. Let’s get wetter than Tame One with a blunt in his hand.” What?

That’s right. “Your girl might hate it but it make your rhyme great.” I think this might be the time to tell you that “Angel Dust” the song and “Good Luck With That” the album have something in common – they’re not for kids. Defcee guest stars on the above ode to expanding your mind with the help of “Sherman Helmsley.” The Career Crooks are not strictly about out of body experiences. “Lipstick Itch” is about Zilla trying to figure out what he wants from the opposite sex, but he quickly realizes that getting what you want isn’t necessarily as satisfying as the chase to get it.

“The older I get, sex doesn’t matter much
The aftermath is bugged baby, nothing comes free
Attachment, misguided feelings, cold sheets
And going on dates, man I hate it cause I’m cheap
I got that lipstick itch though
Happily unbothered still wishin I was single
because we’re all drawn towards beauty
It makes us feel better, until we have it
And then we get bored with it
and start looking for the next package…”

Zilla may be digging uncomfortable close to home for some listeners who wanted to keep their feelings buried. “I’m a product of divorce and that’s no excuse” quips the rapper, vowing he doesn’t regret his choices “until I see my ex with a new boyfriend.” The fact that he’s a clever rapper with a solid flow comes through on track after track, but what really shines is his naked vulnerability on songs like this, showing a fearless ability to let the audience identify with the same conflicted feelings he puts on wax. Zilla Rocca doesn’t want to rule the world, just find a little peace of mind within it, with or without the mind expanding substances.

All of this could fall on deaf ears without a def producer, but thankfully it’s hard to do much better than Small Professor when it comes to head nodding music. Even when he borrows from the familiar he does it with a flair that makes it fresh enough to be all new. You may hear echoes of Diamond D’s “Best Kept Secret” while listening to “Corrupt Novelist,” but the way he flips it and DJ Manipulator scratches to it makes it a pure joy. Another familiar loop cropped up during “Clock’s Ticking” and if you’re an old school Geto Boys/Scarface fan you might recognize it — you’d just have to speed it up a little bit.

I honestly expected another back in the day sample from “Steve Martin” that would be paying tribute to EPMD, but the last two tracks had me fooled. It’s possible that you could still do that dance to this beat, but instead of speeding things up you’d want to slow them down. Small Pro challenged Zilla by taking up the BPM and Zilla proved himself capable to the task, mocking lesser competitors by saying “These rappers sound so bitter.” They should be if they can’t hang with him or Manipulator.

Familiar beats and themes are not all that will strike a chord – there are also familiar underground guest stars like PremRock and Alaska among others. You’re not looking for them because Zilla and Pro can handle s–t like this all own their own, but having likeminded and capable rappers who would be just as comfortable doing a full album with the Professor on songs like “Mike Milligan” is just fine with me.

This is the point in the review where if I had something critical or harsh to say I’d lay it down flat like carpet. Honestly the only unsatisfying thing was that 45 minutes wasn’t enough and it left me wanting more, and the review also reminded me why certain supposedly authoritative internet encyclopedias just don’t cut it because they don’t seem anybody referenced here worth a page. They ALL are worthy though just like this album is worth your money and three quarters of an hour to devote to it. Turn off the TV, put down the magazine, just sit and listen and enjoy.