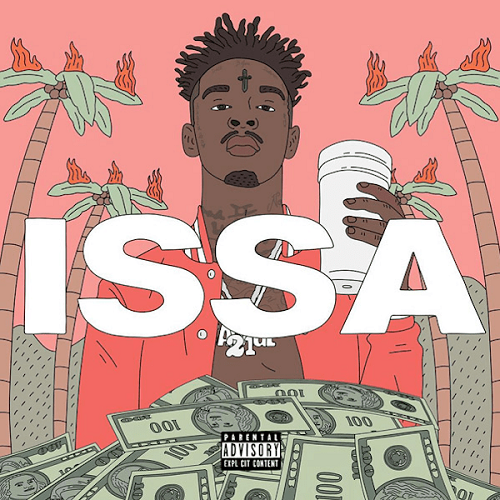 21 Savage is the latest representative of the trap music scene to rise to national recognition and major label distribution. Originally the Dominican born, Atlanta raised artist was dropping his “Slaughter” series of mixtapes just on word of mouth and the usual suspects for free online distribution, but as the popularity of trap rose so too did 21’s profile. He’s now 24 (older than his name) and poised to blow up even bigger with Epic Records co-signing him on distribution of “Issa Album,” which officially broke at all retail outlets on July 7th.

A quick scan of the liner notes for “Issa Album” reveals it’s a who’s who of people lacing up his sounds. Metro Boomin is responsible for over 50% of the beats, but you can also find him co-producing with Zaytoven several times (such as “Famous” and “Nothin New”), DJ Mustard shows up on “FaceTime,” and though I wouldn’t have previously associated him with the trap sound Jake One also gets a production credit on “Bad Business” and “Dead People.” Out of all of the aforementioned tracks though “FaceTime” stands out the most.

“Henny in my system, I’m gone
Speedin on the E way, I’m gone
Girl you put up with that nigga? You strong
Ain’t no need to play games, I’m grown
Out there cheatin man, it turned ya heart cold
She don’t wanna hear the lies, it’s old
Takin shots even when it’s too strong
F–k a nigga, liquor make her moan
Gotta get up in the mornin, she grown
I be drankin I be drivin I’m wrong
Had a long day at work and I know
I can’t text my girl, I’m on my way home
I’m too drunk to text so can we FaceTime?
I won’t waste your time if you don’t waste mine”

It’s an interesting mixture of affectionate ode to a significant other (rumored to be former Kanye and Wiz Khalifa beau Amber Rose) and Kendrick Lamar-esque “Swimming Pools” full of inebriation. It’s far less dark than many of the songs that typify the trap genre and may indeed showcase why 21 Savage is brancing out to a broader mainstream audience. Curiously though the single “All the Smoke” isn’t on this album even though the video for it dropped just over a month ago.

Even though a lot of today’s generation of singing rappers get lumped together and labelled as “mumble rap” by the older cats, I can’t say I have any problem understanding 21 Savage or his flow. If you previously listened to Gucci Mane or Travis Scott and felt like you couldn’t follow along, you should give a song like 21’s “Nothin New” a chance.

“Why you think we ridin round with choppers off safety?
Streets cut throat nigga so I’m cut throat
I used to sell dope nigga now I can’t vote
Poppin Percocets to kill the pain, I can’t cope
Anger in my genes, they used to hang us up with ropes
Civil rights came so they flood the hood with coke
Breakin down my people, tryin to kill our faith and hope
They killed Martin Luther King and all he did was spoke”

As you can see there’s also an above average amount of thought put into 21’s lyrics. That doesn’t mean it’s always positive. In fact to approach the “Issa Album” from the right perspective it helps to know that there’s one thing he very much has in common with other popular trap rappers – a bleak world view and almost nihilstic raps. Even on a relatively upbeat song like “FaceTime” 21 is unapologetically talking about drinking and driving, then getting drunk the whole weekend. That’s not a healthy attitude for a long life, and it’s as easy to say “it’s only entertainment” as it is to say rappers don’t blur the lines between fiction and reality all the time. “Bad Business” is an easy song to ride to but a very bad song to live by.

There’s 56 minutes of 21 to get through and at times it really is Savage. For better or worse the album also achieves a certain bland uniformity at times by staying so true to the trap aesthetic and having Metro Boomin produce so much of the music. It’s not ill-conceived, it’s just that it all winds up becoming a bit monotonous if you don’t randomize it and/or mix in some songs by other artists. There aren’t even any guest stars singing or rapping on “Issa Album.” That’s good since 21 Savage is trying to establish his own identity, but it’s also bad because he needs more variety. In short “Issa Album” is a promising start that builds on his already successful mixtape resume, but there’s much more room for him to experiment, improve, and grow. If he does he won’t need filler songs like “7 Min Freestyle” any more – yeah yeah.