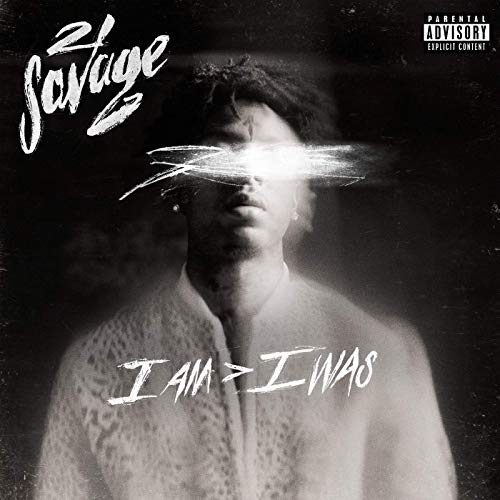 The prolific 21 Savage wasted no time following up on his surprise release “Without Warning” last October. Before 2018 was even over 21 dropped “I Am > I Was” in December and in doing so addressed my criticism that his previous release was “more of a snack” than a full meal. This Slaughter Gang/Epic Records release clocks in at just under 55 minutes, so both rapper and fans alike will be eating off this one for a while. Even though 21 and Metro Boomin are so closely associated that he actually got co-star billing on the last album, this time he’s only credited for two of the 16 total songs released. Even the lead single “A Lot” is not from MB. DJ Dahi and J White split the credit on the beats, while 21 splits the lyrical credit with special guest star J. Cole and does his best to not let Jermaine steal the show.

I was on a high from the smooth soul samples of “A Lot” and A+ level guest star to open the album, so I was shocked that MB’s “Break Da Law” was so…. AVERAGE. It’s not a terribly produced song, it’s just a bad follow up if you’re listening to the album sequentially, and the way the word “b—h” is thrown around makes one wonder WHAT laws 21 wants to break. Unfortunately this makes “A&T” featuring Yung Miami (of City Girls fame) feel like a forced response, as though having a woman being as crass as a man somehow suddenly makes casual misogyny acceptable. Honestly you should skip ahead to the Kid Hazel produced “Out for the Night.” This song showcases the weird dichotomy 21 occupies between uncouth and supportive when it comes to the ladies.

To put it simply 21 Savage is a complicated dude. Sometimes he rises up and shows us all the potential he truly has to push hip-hop music forward into the next decade, and other times he just falls back into lazy sentiments like “I got too many bi—ches, I can’t trip bro” on “Gun Smoke.” This forces the listener to pick and choose selections to really appreciate 21 at his best, but it also forces a reviewer to be honest and say the positives and the negatives run neck and neck. It’s not that 21 needs to be progressive or a “sensitive snowflake,” he just needs to be INTERESTING and not a cliche. Example: if you’re going to be a braggart, do it with the swagger of “1.5” featuring Offset where he drops amusingly over-the-top lines about being so “heavy on the cheddar” that his pockets are like Cheez-Its. I can f–k with that.

There are songs here that will be on repeat after I’ve moved on to the next review. The Bell produced “All My Friends” is the kind of musical sing-along flow that perfectly walks the line between rap and R&B without tipping too far into the latter. Metro Boomin redeems himself by collaborating with Kid Hazel for the clever “ASMR.” It would need to be cleaned up for the radio a bit but TM88’s work on “Ball w/o You” is a sure fire hit. The extended version of “Out for the Night” on the deluxe edition is worth the extra pocket change if you’re already buying the album — it was worth stretching it another 90 seconds for a cameo by Travis Scott.

Ultimately for me the problem is that I WANT to like most 21 Savage albums more than I do. Individual songs are banging as f–k but full albums end up with filler material and problematic sentiments that are harder to reconcile in my 40’s than they were in my 20’s. Maybe that’s a problem with getting older and still trying to love hip-hop, but it’s not as though I don’t listen to old N.W.A records and question some of the casual misogyny there either. “It’s only entertainment” ends up feeling like a cop out when you live in a society where women had to start a #MeToo movement just to wake everybody the hell up. None of this is either 21’s fault or his responsibility, but when he shows me a glimmer of being “woke” here and there I wind up wanting to hear more of it and not getting it. I like the saying “all your faves are problematic” so the bottom line on “I Am > I Was” is that the title is the truth, but I think 21 can be GREATER STILL… if he really wants to.