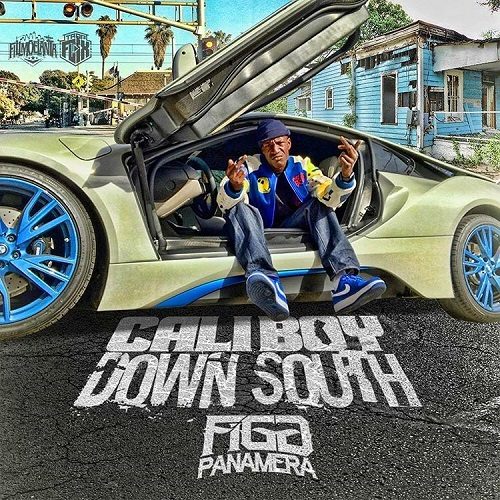 Even as the East and West Coast still had the rap market divided between themselves, a couple of well established artists relocated to Atlanta in the mid-nineties, most notably Oakland, CA’s Too $hort and Flint, MI’s MC Breed, which was quite some time before the ATL itself began to produce a steady string of national stars outside of So So Def Recordings and the Dungeon Family. At that time JT the Bigga Figga was busy building his own music empire in San Francisco, establishing himself as one of the premier businessmen in the booming region that was the Bay Area. Perhaps ‘hustler’ would be a more apt job title, but even thinking back to when JT cunningly cashed in on the blossoming career of The Game a little more than ten years ago, their initial contact was still evidence that before he publicly prayed at the altar of Dr. Dre and was admitted to 50 Cent’s circle, Game sought out the Bigga Figga’s expertise in the music biz. And artists representing eras as far apart as Master P and Zaytoven walked away from the man with one or two valuable lessons.

Setting up shop under the name Figg Panamera in Atlanta sometime in the earlier 2010’s, JT has since collaborated with a number of current Georgia artists, including Gucci Mane, Rich Homie Quan, Future, Migos, Rich The Kid and Young Thug. He wasn’t able to establish himself as an official trap star, but has pursued his second career with a certain constistency and consequence. Back in ’95 and ’96, $hort and Breed praised Olympics-era Atlanta as a contemporary Chocolate City that allowed them to work stress-free in a professional, urban, comparatively upscale environment (likely referring to North Atlanta). Whatever brought JT down to the A years later, business opportunities were probably not last on the list, but the tables can turn quickly on a hustler. When he was shot and critically injured this March, he was drastically reminded of the dangerous side of the urban sprawl that brought forth so many rap stars in the last 15+ years.

Coincidentally or not, as Figg Panamera JT seems to have tended to his conscious side in latter years, in songs as recent as 2014’s “Waking up My People,” 2015’s “Nat Turner,” or 2016’s “Traffic Stop Gon Bad.” Also coincidentially or not, “Cali Boy Down South” chooses not to further explore topics pertinent to society as a whole. In 2017, Figg beez in the trap. Granted, JT has a naturally unrepentant and defiant vocal tone that makes him precursor to someone like Jeezy, but when you think of the Bigga Figga, you also think of funky verbals recited with a resilient, straightforward delivery. On his latest, Figg takes cues from Rick Ross and Atlanta trappers. Opener “Hand in Da Pot” combines typical Rozay vocal mannerims with lyrical stream of consciousness patterns and is a fairly monotone affair despite an abundance of melody and agitation in the delivery. “Bon Appetit” fares better thanks to features from Loso Loaded and Lotto Savage. Musically, “The Ups” has a slight West Coast bent, perhaps due to Zaytoven co-producing the track with the album’s main musical maestro Cassius Jay. Vocally, Panamera adopts a southern swag but comes across like a melodic Master P, which is exactly as absurd as it sounds.

Elsewhere he blends in more easily. On the charismatic “Do What You Want” that Cassius Jay laces with a subtle Caribbean vibe, he speaks authoratively, without neglecting the emotive element of modern (t)rap. But also darker settings suit him, like the brooding “Riding Round Wit Racks” or the solemn “Black Car.” Further facilitating JT’s integration are guests like Kevin Gates and 21 Savage, who assist him on “Phone Ringing” and “Money Talk,” respectively.

Joseph Tom lives by the tried and true motto ‘You don’t work, you don’t eat.’ That’s the reason “Cali Boy Down South” exists. Other than that, on this particular project, there’s not an awful lot on offer that vindicates JT the Bigga Figga’s reincarnation as Figg Panamera. His lyrics sometimes have a vaguely inspirational or cautionary message, but given his vast experience, the bar needs to be set considerably higher. A veteran of 25 years in the game simply can’t pose as the latest local up-and-comer. At the moment, we have to be thankful that closer “Coming For Me” didn’t become all too real with the aforementioned March incident. Also for now, it looks like previous Figg Panamera offerings might be more worthwhile than his latest.