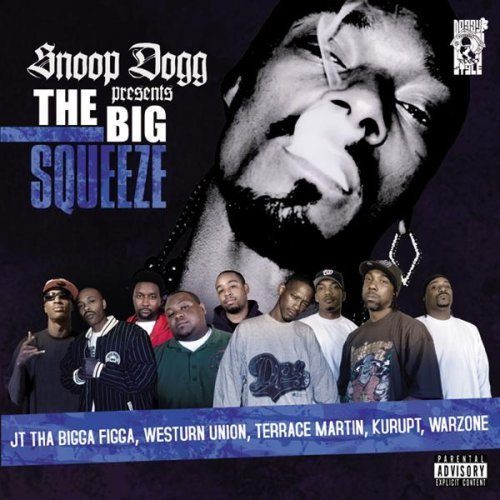 Bold artistic statement or shameless self-promotion? Can it be both? That’s the question you’ll have to ask yourself encountering Snoop’s newest project “The Big Squeeze.” Ostensibly, this is label head Snoop’s attempt to both: a.) put on his stable of label artists and friends, and b.) reveal his producing alter ego, tastelessly yet cleverly christened Niggaracci. Like all compilations of lesser rappers under the big dog, the various featured guests are hit and miss (though mostly hit, at least if you like that G-funk gangsta shit); the key, then, is whether or not the Doggfather’s beats are any good. The answer to that question is: yes and no. Let me explain myselfâ€¦

Touching nearly every track with a guest vocal spot and producing 11 of the 15 beats, Snoop’s fingerprints are all over “The Big Squeeze.” Let’s start with the production. It’s clear from the jump who Snoop’s influences are, as the bouncy bass and poppin’ hi hats jump through the speakers on the intro track. What you’re gonna get is a lot of sounds heavily in debt (or straight up jacking) the classic funk of Zapp & Roger and George Clinton (no surprise there). Songs bang with an instantly propulsive momentum and energy, making you want to snap that neck enough to break a spine or two.

Remember that addictive “Snoop’s Bounce” from the universally disappointing “Tha Doggfather” LP? That propulsive song’s essence nicely sums up the essence of this whole platterâ€”a sound that grabs you instantly but ultimately doesn’t have enough dynamism or musicality to hold your attention for long. As it is, most songs start out getting you mad hype but fail to hold interest past the two minute mark. In other words, Niggaracci picked up a few tricks from his obvious mentor “Chronic”-era Dre (chiefly the ability to surround the blunt nihilism of gangsta spit with bouncy yet hard G-funk), though he fails to include enough surprises or buried elements to keep repeated listens from becoming monotonous.

The guests follow the well-worn but still mostly satisfying West coast gangsta formula, as topics are pretty much encompassed in getting dough, smoking good and treating women like dogs. Any mention of the female sex remains borderline disturbing, with numerous references to whites bitches (or “snow bunnies”) adding a new layer of pathos to the depressing hip hop paradigm of degradation (has Snoop read and meditated on “Soul on Ice” lately?).

Welcome additions include reliable veterans the Dogg Pound, MC Eiht and the (seemingly) long lost Kam. The newcomers bring enough hunger to make up for their general lack of innovation or technical skill. Songs are topically constructed, which is usually a good thing, unless (as in this case) most themes are so unoriginal (anyone wanna guess what “Fucking is Good for You?” or “Get Your Body Moving” are about?). The comp is most effective when Snoop either collaboes with old friends, as on “We Came to Bang Out” with Tha Dogg Pound and Soopafly, or when he steps aside to let the new groups show their colors, as on MC Eiht-fronted War Zone’s “Shackled Up.” The rare instances where he deviates from his formula, as on the metal-guitared “Like Rock Stars” and a handful of slow jams, are both welcome diversions and slightly-unnerving genre exercises, showcasing both Niggaracci’s willingness to experiment as well as his shaky grasp of composition out of his element.

In the end, those who can’t get enough of Big Snoop’s charm and/or that G-Funk sound will find plenty to like in “The Big Squeeze.” For those looking for a creative leap, who’ll have to wait a little longer (and probably a lot longer, judging by how successful the Dogg is at dipping repeatedly into familiar territory). Got a hankering for something to work those Caddie woofers out? Cop it. Needing a little more than further cold-as-ice mugs and O.G. postured lyricism? Better pass for now. But before you do, might not hurt to take a few puffs first.