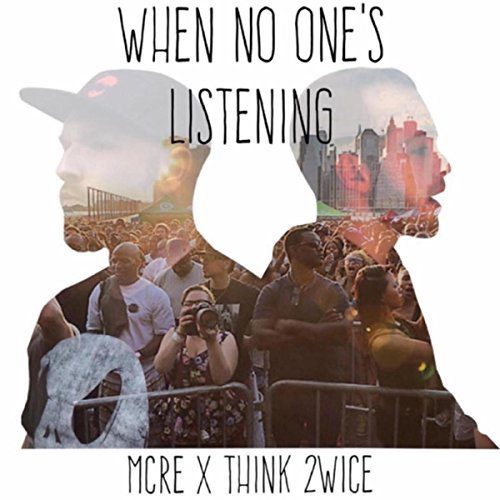 Pacific Northwest rappers are known for being iconoclastic, fiercely devoted to “keeping it real” and eschewing what’s trendy, and going their own direction even if it winds up being anti-commercial and contrary to their own success. There are of course exceptions to the rule like Sir Mix-A-Lot, but in a music scene that often winds up more closely indentified with flannel wearing grunge rockers, rap artists are not afraid to break with that artificially imposed limitation and define themselves in the strongest possible terms. This is the scene that gave us everyone from the Blue Scholars to Macklemore. It’s deep, it’s diverse, and it’s uncompromising as f–k.

Enter into that mix the new tandem of Portland, Oregon rapper Think 2wice and his surprisingly like-minded Connecticut MCRE. It probably seems trendy these days to form unusual partnerships – a British rapper with a New York producer, a conscious rapper with a trap beatsmith, et cetera. As noted this is no mere exploitation of formula though. “When No One’s Listening” isn’t just the title of this collaboration, it’s a lifestyle. It’s a passion project recorded on late nights in a minivan with an iPhone and a digital microphone, but you wouldn’t know it by the sound. It’s professionally mastered and cleaner than a bottle of Mountain Mist. It also thumps loud enough to vibrate even my Bluetooth speakers on songs like “All I Need,” which makes me anxious to find a clear sunny day (harder to do in the Northwest at times) and put this one to the test with the top down. Per C. Wells gets the credit for the heavy pound, chopped up crooner and jazzy piano licks on this one.

Major Dynamic does equally well with “I Still Love Her,” which gets the obvious Common joke out of the way in the first bars, although I’m spending more time pondering which synapse in my brain is misfiring that I can’t identify the sample. I’ve heard it once before on a song I love just as much as this one, and the album is too new for the venerable WhoSampled to solve the mystery for me. Odds are though if you’ve been listening to hip-hop for as many years as I have you too will catch the deja vu feeling with the quickness.

This hip-hop tag team doesn’t get bogged down in the confines of a squared canvas ruled by Buddy Rose and Roddy Piper. Instead they form full fledged Survivor Series sized squads for tracks like “Automatic” featuring Dirty Needles and Obvi or “Rewind” featuring Ekspan and Jace the Truth. Each collab’ has the feeling of a secret bubbling up out of the underground and running downhill through the woods to your waiting ears. “The One” takes everything I said about flannel rock stereotypes and turns it on its head with special guest I.N.F., scratches by DJ TMB and rock productionc ourtesy Edd Bundy.

The most important thing about “When No One’s Listening” is that MCRE and Think 2wice are making something that can stand the test of time even if it was only heard within their own respective circles. From the struggle of pursuing art in the face of financial pressures heard on the title track, to the personal pain bled onto the lyric pages of a track like “Lost,” to the currently divisive political scene on “Two Sides of the Same Coin” everything is imbued with meaning and purpose. Even though the latter song repeats the common mistake of misattributing a quote to Albert Einstein he never said, I still like the quote all the same: “Everyone is a genius. But if you judge a fish by its ability to climb a tree, it will live its whole life believing that it is stupid.” There’s nothing stupid about this album but it runs that inherently underground hip-hop iconclast’s risk of being too smart for the room.