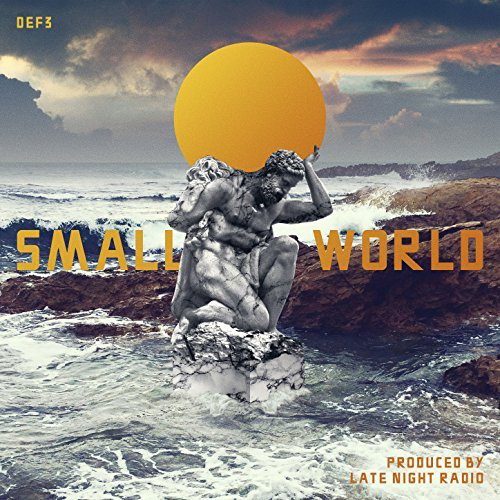 Def3 became def to me in 2014 with “Wildlif3.” He’d been around for a minute before that but linking up with Factor for production made the difference and made me decide to check him out and share the results with the RR audience. That first impression was a good one so I’m back for a second go-around with “Small World,” even though this time he’s working with a producer named Late Night Radio. All good things must come to an end though and no matter how big you are you can’t get DJ Premier or Pete Rock to produce every album you do (let alone every track on it in most cases). This time the formula has flipped – instead of a good producer introducing me to a good rapper I’m looking to see if a good rapper can introduce me to a good producer.

I’m happy to say that for three quarters of an hour LNR doesn’t disappoint, and he gets to flex with some big guns on the title track very early on. Def3 brought in Del the Funky Homosapien and Moka Only to spit on the song, which leaves every chance for him to be upstaged and I’d be lying if I said Mr. 3030 doesn’t make good on that scenario. “When you’re full of bull it results in more s–t” quips Del, but the song is most certainly not. Def3 might be surplanted by the heavyweight guests but he’s not knocked completely out of the frame to the point you won’t remember he was on the track.

The good news is that Def3 immediately makes up for it on “Serenity,” a very personal track which lays bare his thoughts about family and loved ones over a track that’s perhaps surprisingly upbeat. “Headnod” fits it well. He’s spitting some serious bars and thoughts but the track still comes across bumpable and uplifting. It makes me harken back to my own amateur mixtape days in college as the kind of joint I’d think “I gotta share this with someone – it’s too dope to keep to myself.”

“Small World” swings between these ends of the pendulum in ways that might be perplexing from a less skilled rapper or producer. Even though Def3 is good enough to not need any assists to make a quality album, he has stocked this album with a slew of big name guests that anybody reading the back cover at a record store will instantly notice. Metty from Sweatshop Union is on “Big Picture,” Dr. Oop (Droop Capone) is on “S.O.S.” and “Sing” is positively overloaded with talent as Masta Ace and ProbCause drop bars while Skratch Bastid lives up to his name between every verse.

Ultimately it just makes me appreciate more the moments that Def3 gets the majority of the spotlight and doesn’t have to share, such as the heartfelt message he delivers on “Life’s a Trip.” Sure Clark Smith is on this one too so I can’t say Def3 is totally solo but since the focus isn’t being diverted away by big names like Del and Masta Ace I’ll take it.

“I don’t care if they love me or hate me but don’t under-es-ti-mate me
I’m a wild child of the 80’s that’s the opposite of lazy
Hustle daily to get the gravy in a world that’s gone crazy
Dreamin of a day I’m swazy and wavin from a Mercedes
But I’m grateful nonetheless for every day that I’ve been blessed
So even when I’m +Stressed Out+ like A Tribe Called Quest, I’m best
I’m anti-beast and find my beauty in the beats
Cause it’s our job to teach the weak before this culture is deceased”

Even though I wouldn’t go as far as saying Late Night Radio is as good as Factor I also wouldn’t be as negative as saying he’s not a worthy successor. There’s no track on “Small World” that I regretted playing or wished to skip over on a second listen, and throwing on a remix of “Carry On” was a nice touch since the beats are almost completely distinct from each other. Even though Def3 has a song on the album called “Something Missing” you’ll have a hard time figuring out what that is.