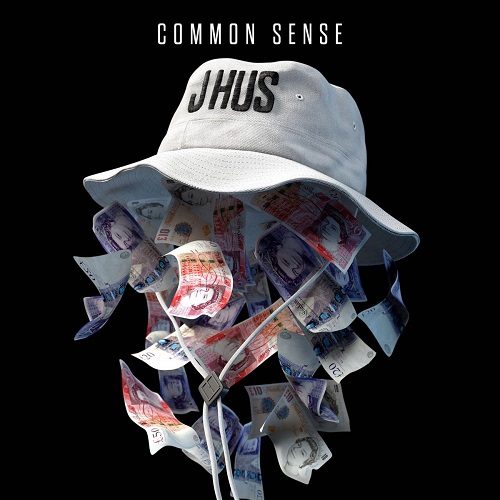 Critical praise hasn’t been in short supply for J Hus’ “Common Sense” this year, the consensus being that the 21-year-old’s retail debut masterfully ties up many musical influences that have gotten the public going in the present and not so distant past. Indeed this is not a record that gives you the same feeling over and over, a feat the East Londoner mainly achieves with the help of producer Jae5. Opener “Common Sense,” festive and assertive, will likely please those looking for more traditional hip-hop fare as Jae5 and co-producers the Compozers pick from a rich palette of soulful ingredients right down to a playfully triumphant trumpet in the finale.

J Hus himself remains distant (but not detatched) like most modern rap artists, but despite his casual demeanor it becomes quickly evident that as a performer he means business. What could be a better metaphor for this than money talk? “Bouff Daddy,” one of several tunes with a distinct contemporary African influence, attains a certain level of sophistication in that department:

“This my house, don’t wear your creps on my carpet
Life of a misfit, broke nigga forfeit
Four-figure outfit, three-course meal
I put my money where my mouth is, no two ways about it
Let one nigga doubt it, twenty in the mattress
Niggas couldn’t mash this, this is just practice
Oh, now I’m gettin’ paid, did I mention?
They never used to pay no attention
Nowadays I hate the attention
Nah, let me be honest, I love it
Spend yesterday’s profit and think nothing of it”

The following “Clartin” is quick to prove that J Hus is a versatile vocalist and can bark his way through drill and trap. The pure rage is immediately tempered by the cold observations of “Leave Me.” The corny but catchy hook puts a dent in the track’s armor, but the rhymes frequently hit home:

“I know an armed robber, used to be a shoplifter
Now me and him got beef and we no longer speak
Still walk his nan across the street
Still put that motherf—er in a body bag
Still help his mother with her shopping bag”

The showcase continues with a fifth pitch, J Hus cultivating the romantic mood of “Closed Doors,” even though vocally and lyrically he’s not the most persuasive seducer. Immediately afterwards “Common Sense” begins to stumble creatively, starting with the album’s biggest track, “Did You See,” which is followed by a string of unsubstantial songs, one-idea offerings, perfunctory trapicana that feels noncommittal. Neither the garage stylings of “Plottin” nor the plings and plongs of “Sweet Cheeks” are particularly engaging, and the guests on “Fisherman” and “Good Time” have nothing to add to the respective concepts. It’s easy to underestimate mood music, especially when it comes on cat’s feet, but a tune like “Did You See” fakes depth with sparse instrumentation, melancholic vocals and the metaphor turned catchphrase “Did you see what I done? / Came in a black Benz, left in a white one,” which is clever on – not so many levels, really.

The pace picks up with “Spirit,” and it should, being it’s the most outspokenly uplifting song, Hus’ hoarse, minimally tuned voice borne by a bumping dancehall riddim and delivering inspirational lyrics:

“If I end up dead or boppin’ on the wing
Just know mummy raised a king
Grind till money ain’t a ting
You became a boss and brought all these bruvas in
Live by loyalty and honour
Same time I do what I wanna
And I know how to treat a woman proper
Cause I seen mama suffer
No money but we had life
I go hungry, let my brother take my slice
Ride-outs and drive-bys
But deep down they’re nice guys”

The album ends on a solid to strong note with a nod to New York rap between Bad Boy and G Unit in the form of “Goodies,” “Good Luck Chale,” a chilling confrontation with mortality supported by Tiggs Da Author, and “Who You Are,” a hustler’s sermon containing more than a couple of lyrical gems that rivals modern stateside models. Only “Friendly,” another lightweight track recorded a few years back, makes “Common Sense” end with a question mark.

Britain’s got talent in abundance. With only one mixtape and one album J Hus has been able to enter the top ten in a competitive market, and “Common Sense” shows why, hitting the right notes with its expert composition and overall emotive quality. The self-made success story alone speaks for itself. Longevity however is an entirely different beast that is not conquered with an age-old lyrical liturgy and samples of a number of production preferences. Not that J Hus needs an incentive, but let’s check with him in five years. There a very few reasons not to look forward to it.