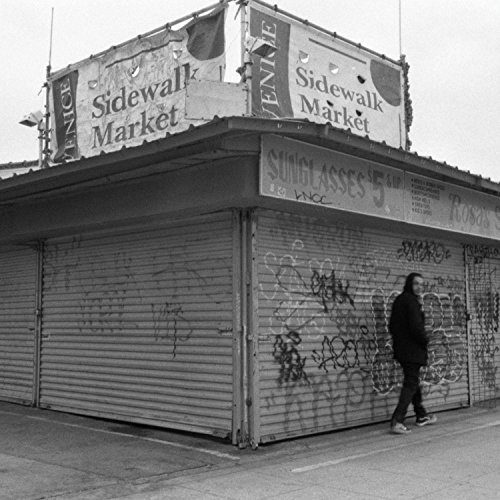 Evidence :: Weather or Not

Rapper and producer Evidence is back again with his newest sixteen-track effort “Weather or Not”. This project is the MC’s third solo album to date as he is also known for his membership in the underground famed Dilated Peoples. Evidence is also a signed member of the notorious Minneapolis label Rhymesayers Entertainment.

“Weather or Not” finds Evidence in what seems to be a comfortable, confident place for him musically. He is a fairly astute lyricist and consistently performs intelligently on his flow patterns as he is capable of making the beats he raps over conform to his serious but relaxed rapping style. This can particularly be seen on songs such as the title track where Evidence picks up the pace of his flow in accordance to the rapid beat but still continues to sound laid back to an extent.

This can also be a weakness of sorts, however, as the rapper’s serious but casual demeanor can get a bit stale several tracks into the record. It makes for a strong opening though on “The Factory” as a no nonsense street beat backs up Evidence’s cool head flow and results in a low-tempo banger.

The opening track is also home to several viral lines such as “A new beginning, who you kidding/ I brought relief like the ninth inning” and the immediately following “There’s a reason why my friends sip codeine/I sat home at night banging So Fresh ‘n So Clean.”

More strong lines come throughout the album such as on the third verse of the title track where Evidence raps, “Love your fans and like your label/And I ain’t making s–t for neither, lay that on the table” or on “Rain Drops” when he states “Heard before Nas that +It Was Written+.”

There is no shortage of such lines on this record as lyricism is not a problem for Evidence. And neither is this album’s production, for that matter.

With production credits including The Alchemist, Evidence himself, and even a Primo beat, this album brings the heat on the boards. From the the gloomy pianos on “Moving Too Fast” to the swirling synths on “Sell Me This Pen” and the booming drums throughout the album, there is no shortage of production strength on “Weather or Not”.

There are no overarching deficiencies on “Weather or Not” besides the potential boredom ensued by the demeanor of Evidence’s flow and presentation. Nevertheless, this is also a strength, as explained earlier.

This LP does present some pitfalls. These are namely the fact that the subject matter of “Weather or Not” can get a bit dull at some points, and the often lackluster quality of the hooks. The quality of the content on this album is not terrible and not at all comparable to some of its contemporaries, but this project does lack the type of material that keeps a listener truly interested.

As far as hooks go, this album is littered with choruses that feels as if they were quickly written around the verses for the sole purpose of completing songs. Many tracks on “Weather or Not” would most likely sound better as a continuous verse considering the blandness of these hooks.

Overall this is still another strong project from Evidence. The rapper is clever with words and has an exceptionally strong ear for production, making “Weather or Not” a pleasant listen.