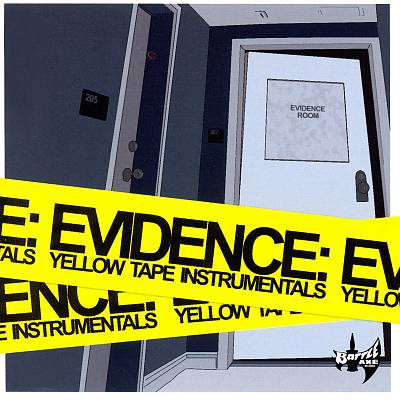 If you know Dilated Peoples, you know Evidence. Even if you don’t, you probably know Ev anyway. His distinctively deep and dirty vocal tone and funny punchlines make him a perennial hip-hop favorite, but a “true head” is as likely or more to know him for the songs that he has scored. Evidence has over the years shown a flair behind the boards for incredibly well-produced music. With Ev you get it all – well chosen samples, pounding basslines, complex layers of music interacting with each other and a penchant for crisp drums. His beats are quintessentially hand-clapping, finger-snapping, and feet-tapping. On a hip-hop short list of best producers, he could share billing with Alchemist, DJ Premier, Mannie Fresh and Pete Rock.

With the release of “Yellow Tape Instrumentals,” some of that fine work is finally being given a chance to shine sans vocals over the top, even his own. Ev writes in the liner notes that “the song titles have been changed to protect the innocent” but as a hip-hop fan you’re sure to recognize some of these cuts. Evidence specifically culled music he produced and released between 1996 and ’99, and threw in a few unreleased tracks just to spice up the mix a little bit. In a way it’s a bit of a shame that nothing from beyond 1999 is included. Some of Ev’s finest work has come in the 21st century, producing for artists like Aceyalone, Defari, Pep Love, Swollen Members, Rasco and even Linkin Park.

Still you can’t front on what Evidence did include on “Yellow Tape Instrumentals,” which are some of the finest beats you’ll hear in all of rap. Since the names have been changed anyway, the song titles are relatively meaningless. Instead the way to perceive “Yellow Tape” is as a forty minute long piece of mood music. Stating with “Dog Town” and ending with “Slow Roll,” the journey in between is a look at the many different styles the multi-talented Evidence can produce. His mixture of electronics, keys, and samples in “Strong” is just that. “360” will be very familiar to his fans, but even those who don’t know his rep can be wowed by the pulsing bass, perfectly timed flutes, and irresistable groove. Ev is not afraid to get “Deeeerty” on the piano keys, but is just as likely to bust out violins in sets of “Three.”

Above all else, when listening to a compilation of Evidence’s fine beats such as “Yellow Tape Instrumentals,” you can truly appreciate the subtle nuances that are often lost when you’re concentrating on the rappers or their lyrics. Sometimes you just know some shit is dope, but you can’t quite put your finger on why. Here the secrets are all laid bare. Ev prides himself on sound levels cleaner than a plate out the dishwasher, with instruments that can at his whim be as sharp as a knife or as soft as a kitten. A great producer knows when to use which and why, and turns what vein rock critics still often dismiss today as “just a bunch of noise” into some of the best melodies you’ll ever hear. Ev is not afraid to sample from pop culture, but is just as likely to create tracks like “Evolve” that spontaneously give birth to new culture through an amalgamation of sound and science fiction. This may be the first official album of Evidence instrumentals, but hopefully it’s far from the last.