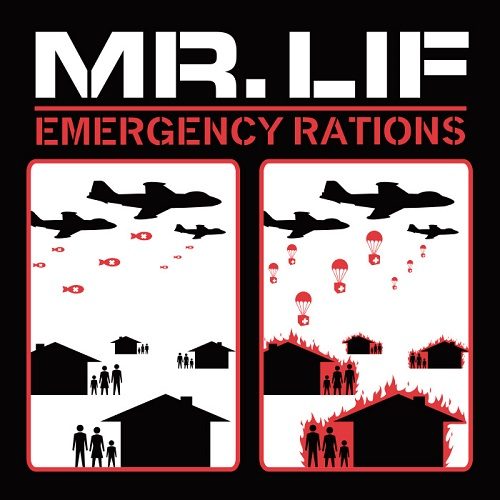 Boston MC, Jeffrey Haynes, aka, Mr. Lif, released the “Emergency Rations EP” on Definitive Jux in 2002. For Lif fans, the album is essential, not because it is by any means his best work, but rather because the EP is perhaps Lif’s most transitional album. “Emergency Rations” finds this Jukie in the middle of an identity crisis, as he struggles with which side of himself to embrace â€“ old school b-boy or futuristic sci-fi geek, conspiracy theorist or everyman, inspirational speaker or nihilist.

Each of these sides of Lif rears its head on “Emergency Rations,” with largely mixed results. “Intro (Missing Persons File),” serves as an exercise in overstated self-importance, as this opening track consists of a conversation between Akrobatic and Brother PC about the whereabouts of the apparently missing Mr. Lif, speculating that the government killed him for his subversive political protests just like they apparently did Martin Luther King, Jr. and Malcom X. Usually I would not harp on a throwaway opener, but the “Intro” demonstrates that Mr. Lif had not yet arrived at the political maturity which he manifests so clearly on this year’s release, “I Heard It Today.”

Fortunately, on the next two tracks, Haynes finds great success in militant mode. On “Jugular Vein,” he flows in a dark and cryptic droll over a similarly eerie Far East-inspired hook. While on most of the EP’s tracks, Lif chooses one identity and sticks with it for the whole song, “Jugular Vein” finds this Bostonian portraying himself as both a hermetic iconoclast and apathetic stoner. In the first verse, he states that he “abandons the earth to be discussed for ages” and, by the last verse, he is thanking his friend for coming over to play Tekken 3, making this listener wonder whether his grandiose claims are little more than video game-epic inspired delusions of grandeur. It is a fascinating statement and a foreshadowing of things to come on the ingenious “I, Phantom” LP. “Heavy Artillery,” while not as complex as “Jugular Vein,” effectively evokes suspense of emerging eternal conflict, as Lif spits mythic violence over a militaristic drum roll.

On the fourth track, “Home of the Brave,” the Jukie moderates his doomsaying, with a more directed political protest, narrating how the American government uses the War on Terror to control the polity and critiquing the U.S.’s war profiteering in Afghanistan. The track may have been poignant in 2002, but now sounds a bit dated, as Lif makes cliched accusations against Bush Administration. While the ominous vocal hook is moderately innovative, the repetitive drum loop does not help bring the track to life. The track is a well-intentioned throwback to the late-Eighties, early-Nineties protest rap of N.W.A and Public Enemy, but lacks the analytical nuance he would become so well known for.

“Pull Out Your Cut” and “Get Wise” evoke a similarly old school vibe. While on “Pull Out Your Cut,” Haynes comes across a bit awkward bragging that he is a “new state of mind, new state of being” over a run-of-the-mill funk hook, his homage to hip-hop and compassion for the downtrodden is refreshingly sincere. Lif and Edan’s verses on “Get Wise” are similarly heartfelt, but cannot overcome the beat’s repetitive minimalist percussion.

“The Unorthodox,” the EP’s penultimate track, finds Lif mixing contrary production styles and subject matter, with somewhat rewarding results. Our MC drops dystopian knowledge of DJ Fakts One’s traditional boom-bap. The beat is kind of boring. The scratching is tight. The lyrics are wholly innovative. The track serves as an interesting synthesis of hip-hop genres, but also comes across as if Lif cannot decide whether to commit to the future or the past.

It is telling that the last track, “Phantom,” is produced by El-P, notorious for his dense, post-apocalyptic beats; “Phantom” was Lif’s last recorded album track before his first Def Jux full length, “I, Phantom.” Mr. Lif and El spit about modern alienation and the desperation of the human condition. This paranoid polemicist identity is the one Lif would come to fully embrace. Perhaps “Emergency Rations” would have been a better album had he committed to this identity for the EP. Still, to understand how he arrived where he is now, “Emergency Rations” is a must listen.