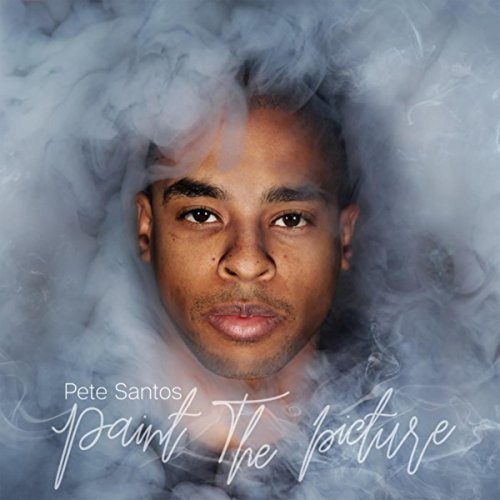 For most artists, canvas is the most popular painting surface. With every stroke and brush, it allows them to get the most out of the colors they use. For musicians, the canvas is the track and the paints used are the sounds. In hip-hop, the art involves arranging various sounds together and merging it with rhymed words to create an audio picture. Some have more of a talent at it than others, showing their ability to marry music and lyrics with a masterful stroke on their first shot out of the gate. For others, it takes a few canvasses with splattered audio effects before they find the sound that coincides with their style. But that can be a rewarding journey for a listener too. Listening to an artist develop their sound across several releases is akin to watching a child grow into an full-fledged adult. Finnish-based American artist Pete Santos is still a work-in-progress, but I believe that his sophomore LP closely coincides with the sound he’s been aiming for since his debut. Though underground, Pete Santos’ music brings a celebratory positivity that makes it an alternative to both the complexity of underground rap and the simplicity/excess of mumble rap.

Like his 2017 “Our Lives Begin” EP, “Paint the Picture” was said to have been produced on a shoestring budget. This time, that meager budget is reflected only in the album’s length: 10 tracks at roughly 33 minutes in total. The album contains song titles that are reminiscent of a Drake album, but this isn’t an album rife with emotional vulnerability or examining the pitfalls of fame. On the surface, it has ambitions of those themes, but it goes beyond them. The album starts off with “Morning Yawning”, an approximate two-minute intro with Pete singing “Time to get up” ad nauseam for the first fifty seconds. The intro’s saving grace was when the music dropped, complete with a smooth saxophone and cowbells courtesy of producer Aron ‘Aatsi’ Onditi. Mr. Santos enlists various Scandinavian music producers and artists to provide beats and sing the hooks (though he sometimes does the latter part himself). The album’s first official song, “Boom”, is produced by Miika ‘Miiks’ Uusikyla, complete with synths and a echoed guitar riff near the end. The lyrics “take back what you told me” have something of a gospel tinge to them, peppered with a little amounts religious inspiration.

The album has been promoted by four singles, with three of them having a gloss that gives them commercial potential. The odd-man out is “Guapo”. Driven by a wistful guitar and finger-snapping snares, the lyrics are relatable: Chasing after a woman who gives mixed signals and pretty much constitutes an unrequited love. There’s a mixture of humor, melancholy, and uncertainty in the lyrics, however, they fit right over Aron ‘Aatsi’ Onditi’s production. While the lyrical content is universal, as a song it pales in comparison to the feel-good vibe of the other singles. “Runaway Love” features production and a hook provided by Berat ‘B.Cimili’ Cimili. Though the lyrics involve wooing a woman with typical “breakfast in bed” promises, Mr. Santos’ flow more than makes up for it. Though not one of the singles released with a promotional video, B. Cimili laced “Runaway Love” to be a track perfect for those humid summer nights. It contains layered synths, smooth vocals on the hook, and a theme of Heaven-sent love. B. Cimili also produced “Odd Nights”, which has a smoky night club vibe complementing Pete’s AutoTune-like vocal stylings. Conceptually, it’s a track with a nostalgic description of late-night video game playing. On the other hand, it could be just using video games as a metaphor for life in general, especially with the line “Get players, the ones who got a connect get the good ones, the ones that command the respect”:

As far as the rapping goes, Mr. Santos isn’t top-tier, but he certainly isn’t hot garbage either. For everything that he lacks when it comes to complex metaphors and layered compound internal rhyme schemes, he makes up for it in terms of the passion of his voice and his earnest lyrics. The album’s title track, produced by Timo Sihvonen, has Pete flowing over scattershot piano keys in the first and only verse. The best hook from any song on the album is courtesy of Sara Sayed on the single “Bang Bang”. This one is perhaps the most danceable track on the album. Its rhythmic pace, melodic music, and vocals make it the tracks most engaging single. “Fame, Power, Love” also features Sara Sayed, and is melded with non-sequitur lyrical references to ’90s hip-hop over B. Cimili’s minimalist bounce which is reminiscent of a Harry Fraud production. Though both “Bang Bang” and “Fame, Power, Love” share the same producer and the same featured artist, the former scores more points because of its melody and accompanying throwback video:

The album is closed out by two songs: The first is “Life of a Star”, with hyperactive drum programming driving an industrial electro-dance meditation on future fame. The official outro that is “Crowd Participation”, with soulful lyrics and a soulful beat minus the soul sample. “Paint the Picture” is a portrait for where Pete Santos aims on going. He has a melodic type of hip hop that, should he ever rise to superstardom, will have a following. The lack of profanity in his lyrics also sets him apart from his peers. Though that’s a choice of expression, it’s one that Mr. Santos foregoes. He discards it in favor of an expression that provides neither social commentary, hardcore lyrics, or even simple sing-song chants. The picture he paints is one that makes the listener experience a positive effect.