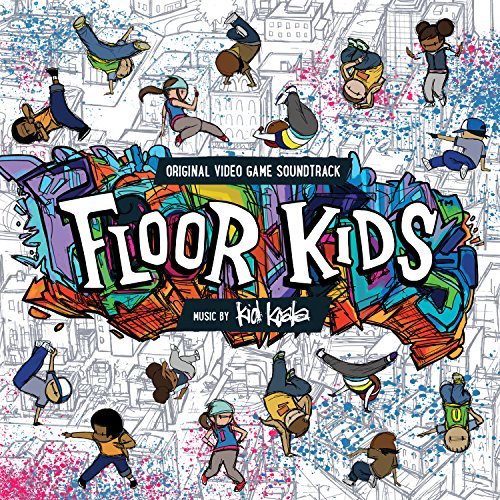 Long time turntablist and musician Kid Koala could have done nothing else in life but work with Del on Deltron 3030 and I would have endlessly sang his praises. The problem is that doing so would be shortchanging his career to a great degree. He’s released over half-a-dozen albums and EPs, done countless remixes spanning multiple genres, collaborated with Damon Albarn, Mike Patton and Prince Paul, and now he can add MAKING A VIDEO GAME to the list. Koala made the tracks for an innovative Nintendo Switch game called Floor Kids about b-boys and b-girls busting out their best moves, moves that were animated by JonJon in sync with the beat.

Floor Kids comes from a genre called “rhythm games.” Even if you haven’t played one yourself you probably understand the concept. You’ve seen arcades where giant machines called Dance Dance Revolution draw crowds of kids and adults alike trying to set the high score by jumping up and down on a giant set of pads to a thumping musical beat. The success of this arcade series was the face that launched a thousand ships, leading to rhythm based home games with accessories (Donkey Konga, Guitar Hero, Rock Band) and without (Vib-Ribbon, Parappa the Rapper, Thumper) where you use the standard controller to press the right buttons at the right time. Either way it’s all about the beat. If you hit the right button/note but you’re off beat, you lose points or hear a negative sound. Miss too many times and it’s GAME OVER. Word to the wise – don’t play rhythm games when you’re drunk. It may seem like a fun idea in theory but in practice your reflexes are slower because you’re inebriated, and if it’s a game involving a dance pad you might hurt yourself to boot.

Getting back to the “Floor Kids” soundtrack, this album is a very meaty 42 tracks long clocking in at over an hour and ten minutes. That would only be excessive were it not for the context of each of these songs. Some are just short interludes between chapters of the video game, a few even accompanied by a mystery man who welcomes the “dance warriors” to his unnamed city and offers them advice, a narrative framing these rhythm games. The full tracks are the ones where your animated dancer can pop, lock, break and spin in a freestyle dance flow. Important moments have a very specific breakdown in the video game and in song – they are your cue to flex your special techniques with the right buttons at the right time. In a sense it’s like performing a HADOUKEN in Street Fighter II but instead it’s with hip-hop dance moves. Time it right to impress the crowd and score big in a stage. That’s what Kid Koala has done here – craft a series of tracks that are both listenable on their own and perfectly integrated with the game’s rhythm theme.

Now this isn’t a video game review and really that’s a shame, because I’d love to tackle the challenge on what is currently my favorite console/handheld/whatever system and tell you all about it. Instead I can tell you about my favorite tracks on the soundtrack. The aptly named “Blue Prints” is a throwback to the 1980’s that could have fit right into Krush Groove or a Grandmaster Flash deejay set. “Cardboard & Concrete” may be the most short but apt descriptor of impromptu breaking ever – anywhere you go can become a dancefloor. “Lab Time” is a funky break. I can’t even add more words to that one – it’s just FUNKY. Feeling the funk flow is a prevalent theme throughout. Some tracks push the boundaries a little more though. “Virtual Field” is more electronica than hip-hop, but you could still bop your head and push buttons to it, and when the breakdown hits it really sparks that b-boy in your brain. Some rhythm game creators describe this as synesthesia, where one sense bleeds over into another, and Floor Kids is definitely going for it with the audio trying to provoke an involuntary response to tap buttons at JUST the right time.

Maybe any competent producer could have made the soundtrack for Floor Kids and programmed it to invoke that specific feeling, but because of his unique production and life experiences, Kid Koala brings an inherently unique “street cred” to this rhythm game so many others lack. It’s why songs like “Boogie Down” work both in and outside of the Floor Kids context – they are fun to listen to even when you’re not mashing buttons because they are more than background music for a video game. A lesser producer would have made head nodding instrumentals that stand alone in a vacumn, or beat bopping tracks that couldn’t gently prod you along to do better in a rhythm game, but this turns out to be a more elegant and refined version of what Parappa the Rapper was aiming for all those years ago. PTR was a Japanese pop culture take on hip-hop with whimsically over-the-top scenarios and a South Park style of cutout animation, but this isn’t a melding of different cultures so much as a celebration of ONE culture – the poppers, shakers, movers and breakers. People don’t always give the b-boy and b-girl their due as one of the fundamental elements of hip-hop but Kid Koala pays tribute to it here and makes a worthwile listening experience in the process.