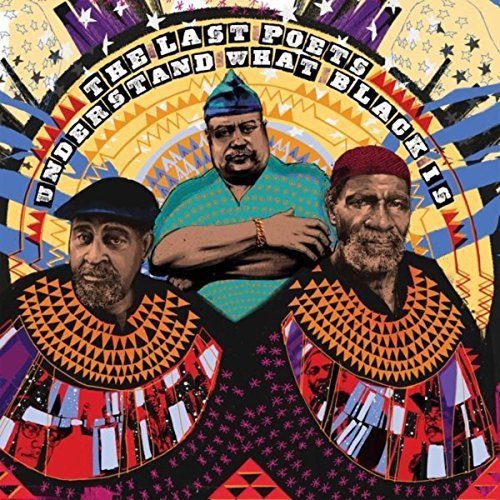 The Last Poets :: Understand What Black Is

If you said The Last Poets were the first rap group ever you might be overstating their case. Their sound always has been that of spoken word poets over African rhythms, and their spiritual successors would be poets like Saul Williams. It’s also possible that dart is closer to the bullseye than rap fans will ever acknowledge. If you listen to The Last Poets catalogue of records from the 1970’s, before/during/after the dawning of hip-hop at 1520 Sedgwick Avenue in 1973, you hear a close kinship to rap music that can’t be dismissed or ignored. Prototypical rap songs were more about having fun than changing the world, but the lessons in The Last Poets music slowly and steadily seeped into hip-hop until records like “The Message” showed that rappers too had serious things to say. It’s not hard to reverse engineer your way back from 1982 to the beginning of the Poets and see them as “rapping” that same message even though it took a while for scholars and musical historians to make that connection. Regardless the Poets kept on creating music with various line-ups in various forms all the way until the late 1990’s, by which point their status as pre-rap pioneers and hip-hop inspirations was finally well established and heralded far and wide.

Time is the grim reaper that comes for us all, and one by one Poets began to fall. The first to go was original percussionist Nilija Obabi (Raymond Hurrey) on March 29, 1981. Sulaiman El-Hadi followed in October 1995, a Poet since the group’s second album, and while I can’t find an exact date for conga player Abu Mustafa (the spelling proves to be problematic for search engines – give it a try and you’ll see why) he left us somwhere between the 1990’s and now as well. The 2018 line-up of the Poets that are still with us includes Abiodun Oyewole, there from the group’s very inception, and the legendary Umar Bin Hassan, who has been a Poet since their self-titled debut LP. Exact birthdates for both are unlisted but they are either 70 or approaching it by this point and it’s inspiring to know they are still musically and lyrically active. In saying that though we have to note that the drums went silent for a VERY long time, as was no new music from the Poets between 1999 and 2018, though you could hear them make cameos on hip-hop albums and compilations here and there. Now they’re back with along with Baba Donn Babatunde and a new message on “Understand What Black Is,” a timely album given the current socio-political climate in America.

By now you’ve no doubt gleaned the fact that “poetry” describes both who The Last Poets are and what they do. I have to reinforce this point out of an abundance of caution — after all the site is called “Rap Reviews” and not “Poetry Reviews.” For me this album evokes memories of a foundational point in my own life when I was arguing to skeptical teachers that rap music was as much poetry as the works of Maya Angelou and Walt Whitman, and for me The Last Poets were the bridge between the “beatnik” poets and the modern “Prophets of Rage” like Chuck D. Sadly I’m far better at articulating this argument now than I was then, but listening to Hassan and Oyewole’s “rap” I find myself fondly reminiscing on finding their records in bargain bins and putting needle to wax and letting them spin. Let me say for the record though that 35 years of consuming rap music only gives me an understanding of rap music and somewhat qualifies me to write about it. I’m in no way qualified to “Understand What Black Is” as the title of this new album implies simply by virtue of my musical choices, nor will I ever profess to be so qualified. I can only tell you this – poetry can be read by anyone, can be understood by anyone, but can only be PERFORMED the way The Last Poets do with THEIR understanding of what black is. “We Must Be Sacred” defines both the sorrow and hope of that blackness.

“Evil is an intruder but why do we let it in?
We have no one to blame but ourselves
We listen to the rhythm, but we never hear the musicians
We elevate and praise the wise men but get lost in their wisdom
We feel the passion and truth of the poets
but kill them with thunderous applause
Is there anything not sacred anymore?
Is there not anything not sacred anymore?
Honesty, justice freedom
Freedom, justice, honesty
All being devoured by western imitations of life, liberty
and the pursuit of happiness is drowning out the tears of deception
If I … if we … had a power so tender as time
maybe then we could wipe this savage onslaught from our minds”

It should be accepted as given that you can only “Understand What Black Is” if you’ve been segreated, subjugated, disregarded or discarded by society simply on the basis of the color of your skin. It would be akin to judging a book of poetry strictly by its cover, but that doesn’t even begin to scratch the surface. This album may just scratch that itch for those who seek to understand the world better, while for those who know the pain of the Poets it’s a balm to soothe the cracked skin of oppression. If someone tries to tell you there’s no such thing as racism in 2018 they’re either naive or foolish, so if you could get them to listen to this album for an hour (57 minutes) it might be a good start. I fear that’s doing The Last Poets a disservice though and putting them in a category of “things you consume for your own good and not for enjoyment.” I’m making them sound like brussel sprouts and kale. Let me be clear – if the Poets are vegetables then they’re steaming in a hearty broth that makes both the vegetables and the soup more delicious, exchanging all of their best qualities under application of time and heat until you are salivating from the smell and can’t wait to taste that stew. It’s a lively upbeat musical stew even if some of the ingredients on tracks like “Certain Image” might at first seem hard to swallow. Relax, inhale the aroma, and take it in slowly. “I want to touch hear taste and smell, the freshness in the air, the integrity in our hearts, the determination in our will, to make this world a better place.”

The Last Poets can’t change the reality of young black men and women dying senselessly in the streets at the hands of gleefully malevolent policemen or savagely ambitious drug dealers. It can’t change the reality of being judged a terrorist because of what God you praise or what veil you wear. It can’t change the reality of a racist President who insists there are “good people on both sides” when one side is the KKK and the other side is the people who protest their wickedness. They offer no salvation for America, but they do offer music with a message, and they don’t beat you over the head with that message. The music alone would be enjoyable, the words read on a page with no music would still be profound, but it is in their combination that The Last Poets still continue to create magic into their 70’s and beyond. Maybe a little of that magic can rub off and help some melanin-deprived people “Understand What Black Is” but if not at least it’s still a pleasure to listen to.