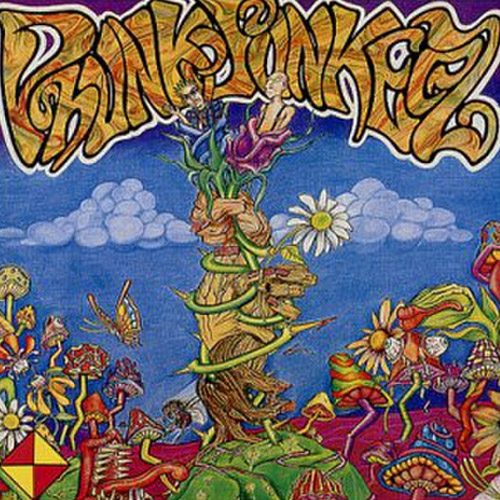 Discovering this album by accident forced me to immerse myself in the extensive, and apparently at times controversial, history of the band Phunk Junkeez. The first thing to know is that it’s almost impossible to pigeonhole them into one genre. They’ve been branded rap, rap metal, punk rock, alternative and rap rock among many other descriptors. The second thing to know is that the line-up of the band has changed numerous times over the last 25+ years, with some members quitting over fights (which has been documented in song by fellow hard to classify band 311), some leaving to pursue their Holllywood dreams, and some just plain getting burnt out. The third thing to know is they’ve earned a reputation for both rocking crowds and simultaneously pissing off promoters. When they do play shows they play until after curfew and get the plug pulled on their set. When they DON’T play shows it’s because they joined a new label and a new tour without informing the venues (or their fans) they won’t be making previously announced dates. Despite all the turmoil they seem to have a sizeable cult following and a few crossover hits including 1995’s “I Love it Loud” from the “Tommy Boy” soundtrack.

This self-titled debut album comes a few years before that point though, first issued on their own Naked Language imprint and eventually being picked up for distribution a decade later by Ichiban Records. The members of the band who were with them in 1992 and still are today in 2018 are Soulman (vocals), Jim Woodling (bass guitar) and DJ Roachclip (on the turntables obviously). Additional members who round out this first album including K-Tel Disco (vocals), Jeff Holmes (multiple roles), Mike Kramer (guitar) and “Disko” Danny D (drums). The copy I found is the Ichiban re-release but I have no way of knowing if they remastered it. I certainly can’t find any additional material on it – the track listing is exactly the same as the original – 14 songs and all in the same order.

As for the group the first and most obvious comparison I can reference when listening to them is pre-“Licensed to Ill” Beastie Boys from their pre-rap days mixed with the aforementioned 311 and a little dash of Linkin Park – but only so far as rapping and the occasional turntable scratch go. Linkin Park fits more into the “nu metal” mode of merging hip-hop and loud screaming metal together, while Phunk Junkeez are definitely closer to merging hip-hop with punk rock. In many ways it’s the opposite approach to the Beasties, who started out as strictly punk rock, turned into a rap act along the way, and then managed to incorporate a jam band sound in the process. If anything the Phunk Junkeez would be going in the opposite direction, screaming headlong from hip-hop into punk rock over loud guitars and drums like heard on their cover of Devo’s “Uncontrollable Urge.” Their hip-hop roots show through though on songs like the lead single “I Am a Junkee.”

I think I actually liked the song a little bit more before I saw the video. While “Uncontrollable Urge” would be their intersection with “Fight For Your Right to Party” and something you could picture Wayne Campbell and Garth Algar headbanging to, “I Am a Junkee” feels like some white boys from Arizona (although two of the members are originally from a trailer park in Alaska) who just want to make rap jams and have fun. Unfortunately the video makes the song as dated as it actually is, with some fashion choices that were questionable even back then along with some dancing that seems uncomfortably like it’s parodying b-boys instead of paying tribute to the original break boys and girls the styles come from.

The rhymes on the album tend to be a little on the simplistic side, such as “Second verse! Not the first!” on the high octane “Pump it Up Some.” While I’m impressed they can flow as fast as they do over this 1:33 track (another nod to punk rock – short song length), it’s not like they say anything of significance (while a lot of punk at least had an anti-establishment, anti-fascist viewpoint). In fact if 2 Live Crew were a rap rock band, they’d probably be making songs like the Phunk Junkeez, with “Thick Like Mornin’ Dick” being a perfect example. The funny thing is that just when I’m about ready to write off this accidental discovery, I stumble onto “Hip Hop Rock’N’Roll” where they talk about their origins as a group called “BumRap” and their evolution into the Phunk Junkeez. This live performance will give you a little idea of what it’s like and also why they’ve maintained a small but dedicated following over the decades.

So here’s the thing – I know that these Junkeez have at least eight studio albums in total, recorded for every label from Interscope to (no surprise) Suburban Noize. I can’t say their self-titled debut makes me interested enough to listen to them seven more times, but I ALSO can’t say I don’t see a little potential here. If this is just a starting point and they continued to evolve from here, they could be comparable to someone like the Kottonmouth Kings, at which point I’d give them their due props for being among the progenitors of what is now a widely recognized style. The rough thing here is that by being on the cutting edge you sometimes get sliced, which means that I can’t recommend their P.J. debut to the fullest, I can at least acknowledge what they were going for and perhaps see how it compares to one of their more recent albums later on down the road.