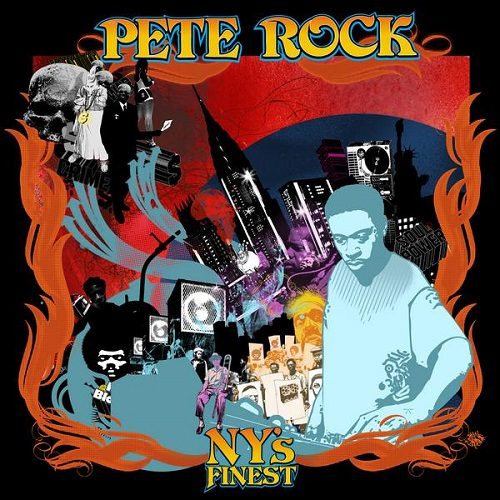 I like Pete Rock. I like his layered, jazzy beats, his knack for finding the perfect samples and working them into perfect beats, his ability to realize hip hop’s potential to reference and build off of other African-American art forms, and his wicked drum beats. I like him because he is a producer’s producer, intent on making good music rather than on riding the latest wave. Most of all, I like him because he’s good at what he does, and manages to make relevant, banging music sixteen years after releasing the classic “Mecca and the Soul Brother.”

“NY’s Finest” is Rock’s sixth solo album. As with all of his post-C.L. Smooth projects, Rock pairs with a handful of guest MCs, and he picks some great rappers. Redman’s turn at the mic on “Best Believe” showcases Red at his stoned best; Raekwon and Masta Killa do their Wu thing on “The PJ’s,” which features a menacing funk beat that could have come from the decks of the RZA himself; Little Brother, clear spiritual successors to Pete Rock’s progressive hip hop, show why they are one of the best hip hop acts around on “Bring Y’all Back”; and Jim Jones and Max B. offer some blunted bars over psychedelic soul on “We Roll.” Papoose, Royal Flush, Doo Wop, Styles P, LD, Chip Fu, and Sheek Louch also contribute rhymes on the album.

Rock also steps out from being the boards to take the mic no less than three times on the album, and proves himself to be as good on the mic as fellow producer/rappers Madlib, Dr. Dre, or J Dilla. In other words, he doesn’t give Ghostface or Lil’ Wayne a run for their money, but he holds his own. He even spits one of the better one-liners on the disc on the DJ Green Lantern-produced “Don’t Be Mad,” telling haters, “Don’t be mad cuz you ain’t me/I’m the fucking poster boy for the MPC.” He waxes philosophical about his place in hip hop on “Made Man, exhibiting some well-earned arrogance:

Of course, not all of the guest MCs are spitting gold. Lords of the Underground’s “Best Kept Secret” is forgettable; Rell’s “That’s What I’m Talking About” is only partly redeemed by the 90s-leaning beat; at five minutes, Rock’s attempt at reggae on “Ready Fe War” is about three minutes too long; and his bars on “Till I Retire” need to go on pension. Those few misfires are more than redeemed by the other tracks on the album. “NY’s Finest” may not be an instant classic, and it probably won’t set the SoundScan charts on fire, but it is a solid effort by a producer who continues to impress. Pete Rock manages to stand the test of time without sounding dated, and without blindly copying the latest fad. He makes hip hop, pure and simple, and does so with a level of skill and technique that is rare. His beats are understated but masterful, and so good that they remind you how mediocre most of the stuff you hear is.