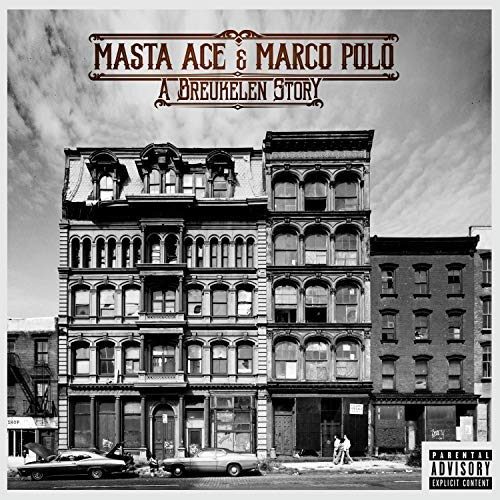 “From where I stand, it’s like the view is panoramic
When my retirement is announced, the fans’ll panic”

With 30 years in the game, Brooklyn emcee Masta Ace has become a revered figure in hip-hop. So much so, that when he does retire for good, fans will most likely declare with conviction that hip-hop is over. Those two bars quoted above are from the song “Kings” are indicative of Ace being fully aware of his well-regarded status in hip-hop. From his solo, group, and collaborative albums, Ace has been consistently dope due to the pensiveness of his lyrics as well as his ability to adapt to the times. Of the 1980s Juice Crew, he’s the only one who remains active and drops albums that keep him relevant with devoted hip-hop fans worldwide. His projects are usually conceptual, with songs and skits joined together to form an overall narrative. His usual enlistments for his cinematic albums are usually a who’s who of talent from subterranean hip-hop.

His latest collaborative project, “A Breukelen Story”, isn’t different by much. Though the title utilizes the Dutch town that his borough was named after, the album isn’t necessarily about Brooklyn. It’s more about his perspective on himself and the world around him with Brooklyn in the backdrop. Well, that and Canadian producer Marco Polo. Producing the album in its entirety, Mr. Polo shines with his affinity for Newport cigarettes while armed with an MPC sampler and such a relentless drive for digging (in crates, mind you) that they should have brought him in to rescue those Chilean miners a few years back. His first collaboration with Ace was on “Do It Man” from “A Long Hot Summer” and later on the highly-replayable “Nostalgia” from his own 2007 debut album, “Port Authority“. Apart from being the sole beatmaker, Marco’s role in the album’s concept is shown in the skits, which chronicle him leaving Canada for the Big Apple, being loosely based on his rise from an unknown intern to a hip-hop producer. Additionally, the album is released on Fat Beats. The irony there is that Ace attacked them 17 years ago on his Boogieman/High & Mighty diss track “Acknowledge”.

The album’s lead single is “Breukelen Brooklyn”. With an assist from fellow Brooklynites Smif-N-Wessun, Ace’s detailed veneration for his home over Marco’s smooth homage to ‘90s boom-bap makes the song a true Walk in New York like Onyx:

Though Ace’s songs usually have an idea behind them, sometimes he’s simply spitting just to spit. “Get Shot” follows that notion as it doesn’t exactly have a concept, but the Brooklyn connection is maintained by having the hook sample several lyrics from Jay-Z. “Still Love Her” is Ace’s take on Common’s “I Used to Love H.E.R.” classic. While there have been several tracks since then that utilize the whole “hip-hop as a woman” metaphor (such as “American Beauty” by Cormega, “25 to Life” by Eminem, “Diamond Sky” by CunninLynguists, and “How I Love You” by Sheek Louch), “Still Love Her” falls short because it doesn’t add any kind of new dimension to the concept. Other songs that fall in the “not so great” department are “Man Law” and “God Bodies”. The former features a verse from Styles P, and Ace briefly uses a football metaphor that harks back to “Unfriendly Game”, but isn’t anything beyond a generic cautionary tale. The latter has a melodic hook courtesy of Trini Boy, but it doesn’t maintain my interest enough to warrant a replay as an individual track.

Ace is at his best when utilizing unconventional concepts to talk about his life or social commentary. Apart from the lead single, one of the tracks that comes to mind is “Sunken Place”. Over Marco’s thumping drums, Ace uses the Sunken Place idea from the 2017 horror-satire “Get Out” as a metaphor for the ongoing plight of Black Americans. He even name drops the comedy duo of Key & Peele in it for good measure. The cinematic element continues with “American Me”. Unlike the 1992 Edward James Olmos film of the same name, Ace’s track applies the film’s concept to what it means to be Black in America’s socially unequal system over Marco’s lush production. The idea is furthered on “Count ‘Em Up”, featuring Lil’ Fame. With samples of children’s voices counting off, it has a tongue-in-cheek feel to it (Ace’s verse in particular) as it attacks the over-incarceration of people of color. On “Corporal Punishment”, Ace enlists eLZhi for a verse. Though rather short, the Detroit emcee drops some gems in his lyrics emblematic of his wordplay and laid-back flow:

“I’m a student of Masta Ace, Pastor Mase
And a Killa Bee with the Casper face
Give you a blessing right in a session
While I’m rolling up ‘dro, loud as a “no” in a room full of yes-men”

Ace’s concepts continue as the album comes to an end. On “Wanna Be”, Ace’s status in hip-hop as one of its elder statesmen is in full-force. Featuring Hell’s Kitchen emcee Marlon Craft, Ace plays the part of the grizzled experienced veteran rapper critiquing the youth of today’s rap generation and their trends. Mr. Craft’s verse puts him in the part of the titular wannabe rapper eager to get in the game. The last official song on the album, “The Fight Song”, is a battle rap of sorts. It’s known that Ace is afflicted with multiple sclerosis and here he engages it, with Queens native Pharoahe Monch personifying it lyrically.

In taking the listener on a walk through Brooklyn, Masta Ace and Marco Polo have employed their respective talents to provide their perspective on their home and what it has birthed. Though hip-hop is reputed to be a youth culture, Ace is one of several rappers who can still rock a mic better than the current crop of new school rappers, making his age irrelevant. And Marco’s production here shows why he continues to be one of the most sought-out producers in the rap game, from underground rappers to old school alike.