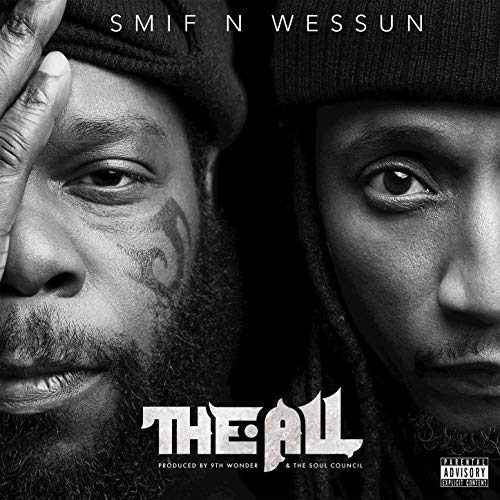 The Duck Down Music/Boot Camp Clik collective is one of hip-hop’s most longstanding and endearing groups. Though their level of mainstream success in the 20+ years since their inception has been sorely limited, they remain torchbearers for the grime and grittiness that are huge components of the NYC/east coast hip-hop scene. Though Black Moon and the late Sean Price are often regarded as the star players, it’s Tek and Steele (known as Smif-N-Wessun) who are among its quietest contributors. Yes, they’re quiet, but it’s deliberate: Because being low-key at that level has given their albums a voice which speaks in very high volumes. Though I fondly remember the feeling I still get when I hear their signature 1995 song “Bucktown”, I’m also cognizant that things have changed since that time. They’re no longer Brooklynites in their early 20s whose central preoccupation is simply to smoke cess and catch wreck. They haven’t given up the qualities that make them a dope hip-hop duo, but the evolution from 1995’s “Dah Shinin’” and their current album, “The All”, is evident.

Though heavily stated (and indicated on the album cover) that the album’s production is courtesy of 9th Wonder and the Soul Council, that’s a bit of an inaccurate statement. 9th himself produced only three songs on this twelve-track album, Khrysis actually produced half of the album with the remaining three rounded out by Nottz, Eric G., and E. Jones. But not to diminish 9th, he did produce the album’s first single, “Let It Go”. Though lacking the familiar drum snares and customary-sounding soul music samples, 9th Wonder’s production is highlighted by piano keys that remind me of the kind used in the Black Moon song “Looking Down the Barrel”. The production goes good with the lyrics and, though I stated that the duo has evolved in the last 20-plus years, Tek & Steele haven’t lost their flair for graphic descriptions of what their lyrical skills cause on the streets. The other tracks produced by 9th also warrant attention, from the Blaxploitation-esque horns on the title track to “DreamLand”. The latter is a reminiscence track with some wistful production to complement the lyrics of the duo and guest rapper Raekwon, whose appearance here strengthens the Wu-Tang/BCC connection. Also, though Khrysis started off on the second single “Testify” at a short length, he picked it up with the soul-swaggered “Ocean Drive”. Featuring Musiq SoulChild on the hook, the guest verse from 9th Wonder – protege Rapsody makes it the best of the four singles released thus far.

The one feature that seems most unlikely here is the Rick Ross-assisted “Let Me Tell Ya”. Produced by Nottz, the song can be viewed as a continuation of the group’s collaboration with Ross on “Capone Suite”, which was exclusive on the soundtrack for the 2018 “Super Fly” remake. Several songs on “The All” have melodic hooks that almost, but don’t quite venture into pop territory. Some of those hooks are courtesy of Fayetteville songstress Heather Victoria, who lends her voice to “We Good”. Khrysis provided the smoothed-out R&B-sounding beat for it and the song features GQ, who sounds like a near dead-ringer Quelle Chris. All things considered, listeners shouldn’t get it twisted: Even with the polished tracks, Smif-N-Wessun flash their established style once again on “Stahfallah”. Emphasizing that they’re cut from a different cloth than their opponents, they also stress to them not to start something that they can’t finish.

The album isn’t at all hurt by the positive messages inherent in several songs, such as “DreamLand”, “Letter 4 U”, and the stellar “Illusions” in which Tek lampshades this with the line “Pray five times a day, try to find my way / Ain’t talk about a weapon yet, so now what critics gon’ say?” Instead, those messages give a counterbalance to the raw aspect of the album. The instrumental codas provided in the last minute on several tracks are representative of the group’s mindset on this album — a couple of street cats with so much soul that it makes both sneaker heads and Kanye West insanely jealous. Nearly 24 years after their debut, it’s good to see Smif-N-Wessun still shining and bringing their all.