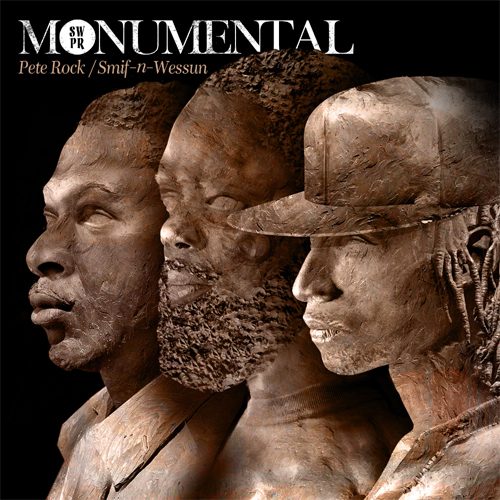 Best shortstop of all time? Derek Jeter. Best “Rocky” film of all time? “III.” Best Air Jordans of all time? XIs. Best producer of all time? Pete Rock. Glad that’s out of the way. Anyway, a more descriptive title than “Monumental” could not have been chosen for a full-length Pete Rock and Smif-N-Wessun tryst, uniting two influential New York acts whose consummate legacies each date back to the early â€˜90s. But even that doesn’t quite capture the extent of this project’s monumentality. Despite the utter brilliance of his solo work, Pete’s best work has come on his full-length collaborations with rappers, where he develops a special chemistry, catering to the rapper’s strengths as much as his own in devising a distinct vision for the project. However, Pete hasn’t laid down a full-length collaboration since the long-shelved LPs with InI and Deda in the mid-90s, so the fact that he’s doing one with anybody in 2011 should already give fans visions of “Mecca and the Soul Brother” and “The Main Ingredient.” That it’s happening with such a decorated act as Smif-N-Wessun, a duo who could quite plausibly be cited as one of the reasons we still wear Tims and hoodies in the winter, is icing on the cake.

Survivors of Brooklyn’s golden age, Smif-N-Wessun were original members of the Boot Camp Clik laden with the blessing and the curse of an out-of-left-field classic debut that they have never surpassed and are unlikely to, although having the Chocolate Boy Wonder in their corner is a good start. The stars aligned for 1995’s “Dah Shinin’,” a smoky, cinematic journey deep into a distant realm that in fact was none other than their native Brooklyn, buoyed by ingenious production from Da Beatminerz, fresh concepts, unforgettable guest spots, and major-label backing that would soon prove elusive. Despite multiple follow-ups, solo outings, and name changes due to copyright issues with their namesake, firearm manufacturer Smith & Wesson, Tek and Steele never quite progressed beyond the rugged street landscapes and ragga-inflected slang of their landmark debut. However, the collective atmosphere of the Boot Camp Clik proved ideal for their grimy style, surrounding them with likeminded artists with different skill sets such as the more loquacious Rock and Ruck of Heltah Skeltah and the less smoked-out Black Moon. Maintaining an audience for their steady output of reliably no-frills New York rap, they’ve remained active and visible on the underground scene for the better part of two decades, and “Monumental” celebrates their tenure as B.C.C. mainstays.

Tek and Steele aren’t great rappers and probably never were, and most of “Monumental” is carried by a stellar guest roster. A magnificent Rock and Bun B make a gem out of “Feel Me,” and Freeway’s outstanding spot on “Roses” makes for another winner. Memphis Bleek rocks “Top of the World,” an early highlight, and Black Rob appears on the late standout “(I’m a) Stand Up Guy.” Elsewhere, Sean Price, Styles P, Raekwon, Buckshot, Hurricane G, Tyler Woods, Top Dog, and Jahdan Blakkamoore lend their vocals, leaving only three of fourteen tracks without guests. With so many collabos, it doesn’t exactly feel like a Smif-N-Wessun album, and too frequently Tek and Steele are outshined by their distinguished guests. Based on their performance, age has eroded much of their youthful spunk, and they’re left with little to say and few interesting ways to say it:

“Hit the streets hard, like a day job
We get money, and thank God
We pop bottles, and make a toast
You know how we give it up from top to bottom
And hit you up from bottom to top
I guess you can call it reverse psychology
If we offended you accept our apologies
But you know how the sayin’ go
Get money, pussy, power then get mo’
That jody-ass nigga’s gettin’ washed up
Wanna see a nigga with three strikes locked up
But you can’t walk between drops of rain
And you can’t keep shooters out the game
Came up hustlin’, started out young
And lived to tell the story of glory and
Tight jeans don’t do nothin’ for me
Unless they’re bein’ worn by a cute face and big ass
Make moves, dodge haters, and get cash”

Surprisingly enough though, the biggest culprit here is Pete. Signs of his magic touch are few and fleeting, and there are minimal traces of soul or jazz. Even the best tracks sport an ambiguous, dated East Coast sound: the title track sounds like a DipSet song from five years ago, “Fire” and “Nighttime” are built around simplistic and repetitive keyboard lines, “Time to Say” catches the chipmunk soul train six years late, and “This One” is a tired stab at reggae. His usually rich horns and pianos are notably lifeless, and are often upstaged by tinny violins and percussion arranged in crude, short loops.

“Monumental” is completely listenable but also completely forgettable. Where fans will expect an inspired collaboration from tenured veteran acts, they will find an effort that ranks at the bottom of both parties’ catalogs. The beats are ironically among the worst Tek and Steele have worked with to date, yet given the quality guest roster Pete himself might have fared just as well on the mic. Although it has its moments, “Monumental” is an album of mixtape-level material that would have been underwhelming fifteen years ago and is even more so in 2011.