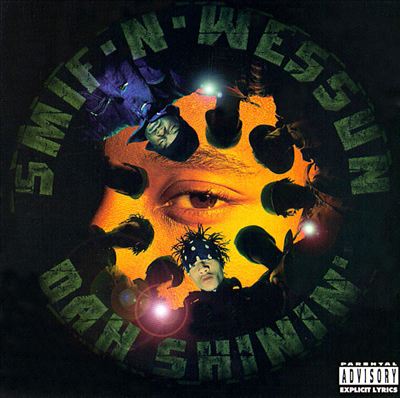 As much as I enjoyed their raps on Black Moon’s “Enta Da Stage” in 1993, I considered Smif-N-Wessun an unproven commodity with only one hit single (“Bucktown”) to their name when “Dah Shinin'” first came out in 1995. When I finally scraped up the money to splurge I opted for the cassette instead of the CD. $12.99 was still ridiculous for a tape, but the word of mouth was that “Dah Shinin'” was da shit so I took a chance.

I should bummed a few rides, saved the gas money and spent the extra $5 on the CD version.

“Dah Shinin'” was one of those tapes that got played so many times in the Walkman and the cassette deck that the tape started to wear out. If you ever had to make a “listening dub” just because you were afraid the original wouldn’t last much longer you know exactly how I felt. A couple years later and SLIGHTLY better off financially I decided to correct this mistake and replace the tape with the compact disc. One problem – the disc was not to be found ANYWHERE. Not new, not used, not in a pawn shop and not anywhere online. Before Amazon.com and eBay got as big as they are today they didn’t offer near the variety of goods they do in today’s dot commerce age, so I was shit out of luck finding the CD. There could have been any number of reasons “Dah Shinin'” was out of print but I suspected they had been sued by gun maker Smith & Wesson due to the similarity of their names, and when they came back under the name Cocoa Brovaz in 1998 my suspicions seemed confirmed.

I chalked up my decision not to buy the CD to stupidity and resigned myself to the fact that I wasn’t going to spend $50 for a sealed copy on eBay – that would just be compounding one mistake with an even bigger one. Smith & Wesson must have either had a change of heart, decided they could license the name for a fee, or stopped pursuing the matter because slowly but surely new albums and mixtapes with the Smif-N-Wessun name were released and subsequently reviewed on this website. I kept my fingers crossed that the original album might be reissued and sure enough I finally stumbled across a copy online a month ago. I don’t remember if it was Fat Beats, UGHH or what – all I know is I found a store online that had copies in stock and ready to ship. I ordered one quicker than Homer Simpson can say “D’OH!” It arrived at my door a few days later and I tore it open like a child does presents on Christmas. “Dah Shinin'” was just as good as I remembered the cassette being if not better. I couldn’t resist skipping right to the DJ Evil Dee and Mr. Walt produced “Shinin… Next Shit” – so simple, so fresh. A brief 40 second instrumental warms you up for a track layered with piano riffs fueled by perfectly pounding drums. The song is medicinal for both rappers Tek and Steele and the listeners.

Steele: “Pressures be buildin in my mind sometimes and ways
That have me countin the many reasons why crime pays
I think about the hustlin games, should I maintain
or flip and just shift to the fast lane?
We got a mind, but it takes dough to make bread
We workin with cement try to make bricks
Time to make a call and get on the ball
(Can’t front G cause we won’t be ones to take a fall)
Heads recognize me, so they might supply me
But if they try me, that wouldn’t surprise me
But I & I keep eyes open, for those who lie scopin
Be hopin we won’t survive – whatever!!
We can do this for worse or for better
Me and my partner-in-crime is goin through this together
So knowin we can’t avoid all snakes, we gwan’ do
whatever we gotta do, to set this shit straight”

Next up on rotation I had to go back to the classic track – “Bucktown” – home of the original gun clappers. Walt and Dee went mining for Da Beatz and came back with an saxophone instrumental that would have been timeless even without the classic raps it was laced with. Add on Steele’s bravado and Tek’s NY patois and the song goes down in hip-hop history.

Tek: “Got five MC’s that wanna come test we
Got ya noses ready hangin ovah da trees
Bring on your sounds and get drowned by my massive
Kill your baaty boy and hold your lover for hostage
Knock knock, niggy knock, that’s fo’ shots empty
On a violator that was sent out to get me
I’m to’ up from the flo’ up, and everything’s black
But still I’m on point ready to buck ain’t nuttin sweet Jack
Bucktown, I represent it on the love love
Deeply rooted from my Timbs to my dick above
Don’t sweat the bulge comin from my hip
Grip what ya did hit, when I let my tool click
Nowhere to run, ambush lurks in the dark
Heltah Skeltah smirks while you’re gettin torn apart
Here come the rude bwoys with the ganja plants
Smif-N-Wessun, generals of the Boot Camp”

Listening to “Dah Shinin'” takes me back to a time when hip-hop seemed to have unlimited potential and an endless supply of dope albums coming out week after week, month after month. These days the top of the charts are filled with the bottom echelons of rap talent, constantly dumbing down the dialogue to nearly monosyllabalic flows, but when Smif-N-Wessun decided it was their time to shine they could make even the hardest and grittiest street anthem musically and lyrically beautiful. The beats and rhymes of “Wontime” still send a shiver down my spine in a good way and I have to thank Rich Blak and Mr. Walt for that rugged echoing bass that sounds even better now in pristine digital format. This track pounds hard in every way imaginable.

Steele: “Before I lay my head down to rest
I roll up a nickel sack of cess to relieve the stress
The herb and the calisthenics do a nigga justice
They fake, cause some are slick and can’t be trusted
I put up with none of them punks who front shit
Even though some I used to run wit and smoke blunts wit
Fuck the foreplay let’s do shit the raw way
Kill the he say, she say, check what we say”

Tek: “I’m dwellin in the cellar wit my niggaz Heltah Skeltah
Loadin up the clips wit lyrics punks run for shelter
Smif-N-Wessun’s on the loose with a noose for yo’ neck
You let info slip out so it’s dead ya get
There’s the Black Moon we creepin up in ya room
Death fills the air along with the scent of boom
Open ya eyes motherfuckers and greet ya fears
Off with the head of a snitch and he’s outta here

I could easily write another ten paragraphs about how much I love this album but I think it will have to suffice to say there are 16 tracks and not a bad one among them. This may be the finest example of Da Beatminerz production techniques among their vast catalogue of work inside and out of the Boot Camp Clik. All real heads will “Wrekonize” how dope this shit is, because each song can “Stand Strong” on its own two but collectively they form a “Cession at Da Doghillee” that’s almost too great to be believed. “Hellucination” is arguably one of the most cinematic rap tales ever put to a beat and the whistling musical backdrop gives the entire thing a spooky yet entirely headnodding feel. “Let’s Git it On” is top ten best instrumentals ever used on a hip-hop song, punctuated only occasionally by flutes and tinkling sounds that don’t take away from how the pulsing bass carries the entire song. When Smif-N-Wessun utter the words “Do me a favor – AND BRING ON DA REAL MC’s” you really get the feeling they’re at war with the entirety of mediocre hip-hop, encouraging all comers to get it on or GIT GONE.

Now I remember why my original tape of “Dah Shinin'” wore out – the kind of repeat play Smif-N-Wessun demands is more than any magnetically coated plastic tape can stand. If you’re still reading this and haven’t gone to buy a copy already visit one of the two links above or go to your local box store and see if they managed to stock a few copies. NOW – don’t fucking wait. If your faith in hip-hop has been wavering of late “Dah Shinin'” will remind you why it’s great. Fueled with uncomprising attitude, braggadocious flows and compelling prose, “Dah Shinin'” is the kind of album that only gets better the more times you listen to it.