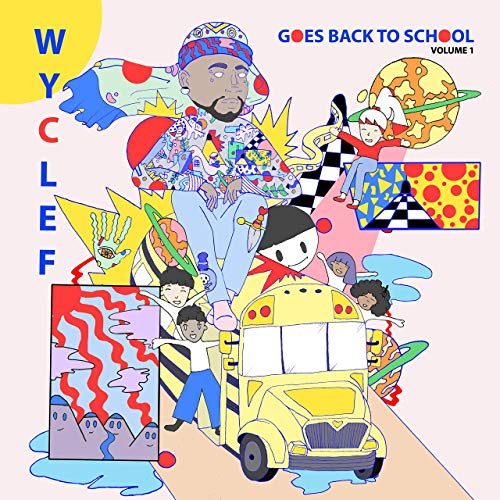 After a decade marred by both personal and professional setbacks, Wyclef Jean’s “Carnival III” in 2017 was a return to form for a multi-time award winning artist whose musical career spans three decades. While the album did not achieve the lofty heights ‘Clef did in the 1990’s or 2000’s, it did at least affirm that when he ignores the strife in/around his life and focuses on music, he’s a gifted musician with a powerful ability to write, sing, produce, compose and rap his way through a quality album that merits repeat listens. To me the natural follow up to that return would have been “Carnival IV: The Wrath of ‘Clef” (j/k) but once again Jean seemed to go AWOL until the release of “Wyclef Jean Goes Back to School Volume 1” this month.

The lead single “Demons Enjoy” featuring Moira Mack and Jeremy Torres slipped right beneath my radar. I can only think that’s because of the fact it’s virtually unidentifiable as a Wyclef song other than the gently strummed guitar until about 2:23 in. According to the press kit I just received this is because “the record is all original songs written by Wyclef that feature collaborations with aspiring musicians from college campus’ from across the country”. At least that explains what he’s been up to for the last two years since “Carnival III” as well as why he almost literally plays second fiddle on his own song. That’s not to say it’s a bad song. I can see why Moira in particular would be a welcome protege for ‘Clef to have sing on his tracks.

Concurrently “Wyclef Goes Back to School” is not a bad album, although it is at times a strange album. It’s a remarkably short album at 31:31 in length, which informs the decision to name this “Volume 1” as clearly he’s held over material for “Volume 2” in the future. The funny thing is that while Hollywood sequels (like the aforementioned Star Trek IV) often perform as well or better than their predecessors, the same is not necessarily true of rappers save for Shawn Carter. The first “Carnival” went multi-platinum, the second went plat, and the third… well to my knowledge it hasn’t even gone gold. His fading celebrity status due to a self-imposed musical exile is more to blame for that failure than the album’s quality, but it should also be a stark reminder to Jean that demand for a “Volume 2” may not be there. It could come to pass that the next chapter of material never even sees the light of day.

“Tell me who you f—ed last night?” Wyclef puts himself in the position of a woman scorned on “A Woman’s Smoke,” and come to think of it “A Woman Scorned” would have been a better title for it. What’s odd here is that his collaborator Jazzy Amra comes closer to rapping on the song than he does, evoking a Beyonce style delivery of her biting lyrics about her cheating man. If you DO want to hear him rapping he provides ample doses of that on the album’s second single “Baba” but I must issue a strong warning about this video. There is NOTHING subtle about the fact a white man puts a rope around Wyclef’s neck and… well let’s just say if Logan Paul put this on YouTube it would ALREADY have been taken down. Discretion IS advised.

For this among other reasons it’s very hard to discern what ‘Clef is going for on “Wyclef Jean Goes Back to School Volume 1”. The video might make you think he’s trying to stir up controversy, while the song by itself is classic old school Jean and not the least bit scandalous. While I appreciate the fact he is giving young musicians a spotlight on these tracks, like the strong performances of Cryptic on “Conexión Caribeña” and Ausar on “Hieroglyphics”, it also feels like the concept of the album exists in a vacuum where only the people from his college lecture tour who ended up ON said album would have known it exists. How does it really benefit these young people if a three time Grammy award winning artist doesn’t take them on tour, showcase them on late night talk shows, and promote the hell out of it everywhere?

I’m left with a mixed bag of emotions at the end of “Volume 1”. While I enjoyed the presentation and think that Jean was discerning in his choice of college collaborators, I also feel like the album was far too short and comes off more like a vanity project than a sincere effort to promote the next generation of young artistic talent. On the plus side it’s an album that almost completely avoids the pitfalls of today’s younger musicians in their quest to AutoTune their way to success, but on the minus side if a tree falls in the forest and no one hears it, did it even make a sound? Perhaps that’s up to you the reader then. Give Wyclef’s proteges a chance on “Volume 1” and you may find they deliver the goods, even if the price is a little steep for the amount you get.