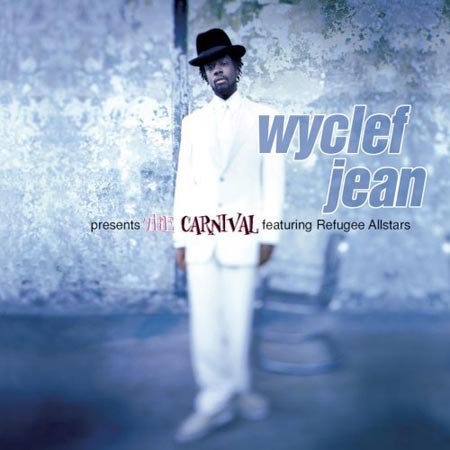 Let’s be thankful that Wyclef is talented enough to make The Carnival a very good album despite two glaring flaws: Firstly, he’s not a particularly good rapper, and secondly, the myriad of skits on this album are so annoying, stupid and boring (or any other negative adjective you can think of) that it nearly drives the listener to breaking the cd in half. The former, believe it or not, may be the easier obstacle for Wyclef to overcome. He’s not a very good rapper (though not horrible), but he has an exceptional singing voice, is a talented guitar player, and constructed many addictive beats for this album. The second flaw I mentioned, the skits, are so unbearable that I will give some bold advice right now and say that if you haven’t yet heard this album, one could easily skip the following tracks and not miss a beat (pardon the pun): 1, 4, 8, 11, 14, 17, 20 and 21.

That being said, I must say that I am actually a fan of this album because I favor music which blurs the constraining lines of definition. Wyclef’s diverse musical tastes–undoubtedly a result of his upbringing in Haiti, Brooklyn and New Jersey–shine brightly throughout The Carnival, and it comes off as an honest attempt to create the very musics which inspire him. Infact, titling this album The Carnival is by no means a misnomer; Wyclef treats us to a little bit of everything on this album

This album is at its best when Wyclef is at his most creative. “Apocalypse” incorporates a soaring, operatic female vocal over a laid-back bass and drum line as Wyclef rhymes the verses and sings/raps the chorus. The song is so good that it’s even forgivable when Wyclef raps “Arrival of The Carnival, new beats I never recycle/While you were looking for samples, you might get trampled.” He never recycles? I’m hoping this was a joke of some sort as Wyclef and his ReFugee cohorts were notorious for sampling/interpolating both before and since the release of this album (see “Killing Me Softly,” with the Fugees, or his solo interpretation of “Wish You Were Here”). “Guantanamera” interpolates the song of the same title, performed by the late Celia Cruz. The intro sounds like one belonging to an upbeat oldie, but the mood changes when the booming beat kicks in and ‘Clef narrates his tale of love.

“Yo, I wrote this in Haiti, overlooking Cuba
I asked her what’s her name, she said ‘Guantanamera’
Remind me of an old Latin song my uncle used to play
On his old 45, when he used to be alive
She went from a young girl to a grown woman
Like a virgin, so she sex with no average mon
Peep the figure, move like a caterpillar
Fly like a butterfly, let your soul feel her glide
Pac Woman, better yet, Space Invader
If your name was Chun-Li, we’d be playing Street Fighter
{*sing-rapping*} A Penny for your thoughts, a nickel for your kiss
A dime if you tell me that you love me”

The chorus is absolutely beautiful and addictive on this one, and Lauryn Hill even kicks in a verse (which may have beeen better than ‘Clef’s). This is undoubtedly one of the best three songs on The Carnival.

Wyclef shows some of his guitar skills on “Bubblegoose,” as he takes a page from Jimi Hendrix’s book as he sings the same notes he play on the guitar. “To All The Girls” features a nice, funk bassline as ‘Clef apologizes to all the women he hurt due to his infidelities. “Anything Can Happen” has ‘Clef flowing nicely over a playful horn sample as he explores the myriad of possibilities in this life–even The Knicks winning the championship. “Gone Till November” is easily the best and most recognizable track on The Carnival, and rightfully so. Wyclef reached deep into his bag of tricks for this one as he effortlessly mixes guitar, rap, thumping bass and drums, and even the New York Philharmonic. All of this, along with an infectious hook, compliments a lamentful Wyclef as he apologizes to so many women why their man won’t make it back.

On “Sang Fezi,” Wyclef showcases his impressive multilingual skills–this time laying the vocals in Haitian. The beat, composed of a plucky guitar loop, keeps the song enjoyable despite the fact that many of us may not understand a word he’s saying. Lauryn Hill appears again, this time to add some nice vocals. “Jaspora” and “Yele” also feature Haitian vocals and are both nice tracks. “We Trying to Stay Alive” is ‘Clef’s interpretation of The BeeGees’ disco classic “Stayin’ Alive,” and it’s pretty good as far as dance songs go. “Gunpowder” is a touching, Bob Marley-esque song with all the fixings for a Caribbean original: Acoustic guitar, bongos, and soulful vocals provided by the infamous I Threes–Marley’s own background singers.

It’s not much of a surprise that The Carnival generally remains Wyclef’s most popular solo album to date. Though he’s not the greatest lyricist, he doesn’t claim to be either. He seems content to do a little bit of this and a little bit of that. The greatest feat achieved by Wyclef is not that he sipmly threw a bunch of his eclectic tastes onto an album–many artists have done that–but that he does it so well. This album truly captures so many of Wyclef’s musical tastes at their best: Guitars, rap, vocals, head-nodding beats, foreign languages, disco, reggae and even the New York Philharmonic. If you don’t usually enjoy something a little unconventional, go out on a limb and check this one out.