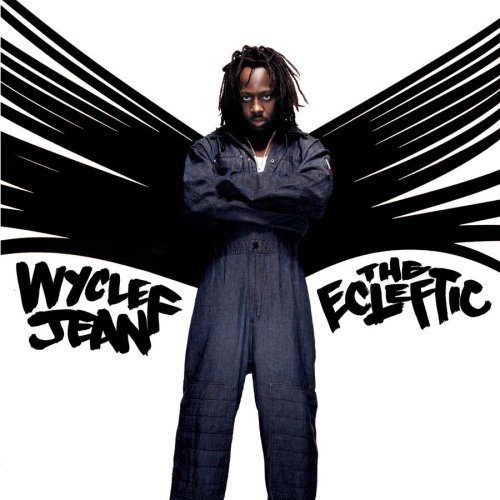 Few rap artists can draw as much admiration and ire at the same time as Wyclef Jean. Even though he made his name as one-third of rap supergroup The Fugees, he branched out solo to worldwide acclaim with his album “The Carnival”. Since then, Wyclef has been all over the place – recording songs with everyone from U2’s Bono to Matt & Trey from TV’s “South Park”. This has lead more than a few people to question Wyclef’s sanity; let alone where his ex-Fugee homegirl Lauryn Hill is hiding out at while ‘Clef spins further away from the sound that made him famous while she collects Grammy awards.

Never let it be said that adversity doesn’t inspire creativity though. On “The Ecleftic” Wyclef has an answer for everybody: Fugee fans, industry critics, and even Fugee soloist Pras and his “Ghetto Superstar” album.

“All I hear is Fugee this, Fugee that, where Fugee at?
I need Fugees to spit upon this track
Lauryn if you’re listening, Pras if you’re listening
Give me a call, I’m in the lab in the Booga Bassment
Y’all know my style, I’m still minnie money
Mini-many, it ain’t all about the money
We used to rap, now y’all wanna come and get me with a gat?
You must be smoking crack with Pookie from New Jack”

That pretty much summarizes where Wyclef is now – he’d love to bury the hatchet but he’s not sitting idly by waiting for an apology when the family is tripping. Meanwhile ‘Clef is out there trying things that have never been though of before; such as putting Kenny Rogers and Pharoahe Monch (no I’mNOT kidding) on a remix of “Simon Says” which is obscurely called the “>Kenny Rogers – Pharoahe Monch Dub Plate.” While Pharoahe raps that he got “women in they thongs, gettin it on, but not Sisqo” Kenny croons a modified “Gambler” hook that includes the lines “You got to count your ducats, ‘fore you touch the turntables, cause if you run out of big tunes, that means your sound is done.” If you’re not screaming in horror, you may actually appreciate how Wyclef “breaks all formats” with this song – it’s actually quite good.

Wyclef pushes the boundaries of what’s “hip-hop” throughout this album. He attempts to do a “Dirty South” rap on the song “Thug Angels” and mostly succeeds; then follows up with a club song featuring THE ROCK from the WWF called “It Doesn’t Matter” where Wyclef’s rap is a little suspect but the tune still carries the groove. ‘Clef isn’t afraid to bring in anybody he feels will carry the groove; whether it’s hip-hop soul diva Mary J. Blige on “911” or 70’s funk sensations Earth, Wind & Fire on the funk groove “Runaway.”

Wyclef’s not afraid to criticize other rappers for “beats sounding the same, rhyming the same” and “wearing the same jewelry” on songs like “Pullin’ Me In” but it’s possible he’s gonna lose people by being TOO eclectic (or if you prefer, “Ecleftic”) when rappers like Marie Antoinette show up on “Da Cypha” and he switches to confusing up-tempo booty shake like “Perfect Gentlemen” then sings Bob Marley style on “Diallo.” This is not to say these songs are the wack (certainly not the latter, with it’s indictment of crooked N.Y.P.D.) but that your average hip-hop head may not be ready for a rap album QUITE this diverse.

To be sure, Wyclef still has the same vibe that made him millions of fans on The Fugees’ “Score” or his solo album “The Carnival” but rappers like Small World (who appears on “Thug Angels” and “Hollywood to Hollywood”) don’t hold a candle to ex-ReFugee family members like Lauryn or Canibus. Wyclef is hard-pressed to hold this album up on his own as a rapper; as he often seems to be running ahead or lagging behind the beat with his lyrics. Whereas Lauryn should sing less and rap more it may actually be possible Wyclef should rap less and SING more. On the harmonious tunes, Wyclef’s soulfulness is quite appealing.

Wyclef scores though by taking chances when he could have just folded up and called it quits. The groove on most of this album’s tracks will carry you through even when you’re lost between the lines of Wyclef’s unabashedly experimental sounds. If you give him the chance you may be carried away by the melodies of songs like “Wish You Were Here” and “911” – and you won’t regret it either.