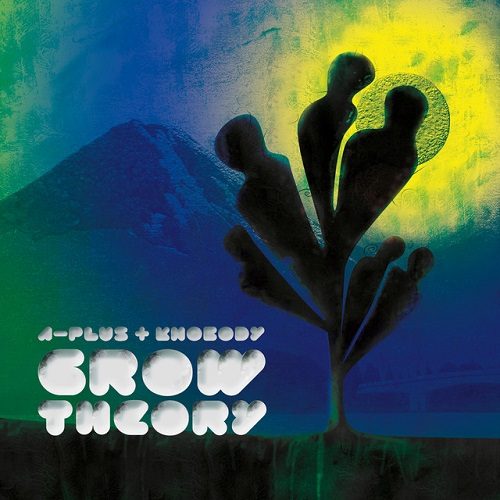 They both have a couple of namesakes in hip-hop, but when A-Plus and Knobody team up, it’s a Town thang. Not that A-Plus, whether in the company of his crew Souls of Mischief or as a member of the Hieroglyphics collective, was ever your typical territorial rap representative, but since the reliance on local structures was always obvious, that one of the few later additions to the Hiero Imperium, Knobody, also would call Oakland his home, was a matter of course. Since his 2007 debut under the supervision of Casual and the (short-lived) Hiero outlet Triple i League, Knobody went quiet, therefore his 2018 joint album with A comes both as a little bit of a surprise as well as a confirmation of the solid organic relationships that develop in the Hieroglyphics greenhouse and under the Oakland sun.

A-Plus showcased his beatmaking abilities a while ago with the instrumental project “Think Tank”, and considering “Grow Theory”, the practice has paid off. What you should not expect going into the album is either the dominant sound of today or hard, colorful beats reminscient of the Hiero heydays. The production picks up elements from various points in time and packages them in a crisp and clean foil. It’s not heavyset hip-hop that these days, correctly or not, is subsumed under boom bap, but a fairly fresh concoction that retains the optimistic, youthful spirit (if not the sound) of, well, “93 ’til Infinity”. Deejays, singers and guest MC’s round out the experience, for example Mike Marshall and Equipto on the obligatory smoking break “Been Loud (Roll Up!)”.

A shared passion for weed might have been the start for these two, but it’s definitely not the end of it. The existential theme of growth runs through their album, starting with “Theory” and “Grow”. On the former, singer Xiomara and rich spheric synths create an atmosphere reminiscent of trip-hop before the rappers deploy their sharp flows and intricate lyrical patterns. “My grow theory of expansion / is really enhancin’ / removin’ rancid tyrany of Mansons”, offers A-Plus in his typical pointed intonation and stream-of-consciousness capers, while Knobody’s arguments tend to go a longer distance: “I feed on light like photosynthesis / I breathe on mics in broken sentences / Hopin’ to see some growth in a industry only interested / in grossin’ its gross cause that’s where a nigga most be limited”.

With a bulky bassline and anthemic stabs, “Grow” packs more punch musically, which is reflected by determined raps that peak in a flawless hook:

“I came from the soil like a seed in a pot
Play the game for the spoils, now I’m cream of the crop
Stay loyal to the dream, bring the team to the top
And bet we never don’t, ever won’t stop”

As the album progresses, the music continues to provide the MC’s with a solid foundation. Dubstep-type distortion propels “That Universal” and its sparring raps, while the instrumental interaction is just breezy and bouncy enough to make sure “Along With Me” delivers on the promised fun ride. Yet despite the forget-your-troubles theme, the duo manages to convey their motivation. Adam:

“Avoidin’ negative drama like we in high school
I couldn’t go bad on my people even if I tried to
Times change, they say that we gotta change with ’em
How I’m still the same, speedin’, weavin’ and lane-shiftin’?
I ain’t people with evil, I keep the range distant
from the lame, different points of view that make your brain twisted”

As a project that promotes maturation, “Grow Theory” is well advised to develop an appeal of its own. It might be that then and now it meanoeuvers itself into a blind spot musically and finds itself caught between the modern and the traditional sound. Hip-Hop genetically is able to fuse uplifting moods and hard-rock attitude, but today that seems almost an anomaly. “Grow Theory” can be seen as a throwback to the last decade when producers from Dan The Automator to Kanye West tried to devise a universal hip-hop sound that had no preconceived reservations against a professional (i.e. traditional pop) sound. Today pop and rap steadily converge, but in a slightly different way, as the rap side (if you can still call it that) sets the tone. Either way “Grow Theory” stands on its own, marked by the clarity of all sounds involved (vocals included). “Find My Way”, produced by Alex Daniel, in particular rises above the basic structures of most rap and trap songs as an evolutionary piece that starts doubtful and finds a confident conclusion. Similarly, the closing “Expendables” (co-produced by AAGEE) has a serious storytelling vibe to it.

“Grow Theory” touches upon various basics of hip-hop music. As a self-produced collaboration project from the West Coast that is committed to a fresh sound and optimistic vibes without ignoring hardships both individual and collective. A-Plus and Knobody affirm each other that they’re on the right track, creating the familiar comforting atmosphere the listener can draw confidence from. Knobody’s lyricism tends to be slightly more advanced (for a stellar verse, check “Future Bright”), while A is sometimes held back by his macho battling attitude. But props to the guy who kept his youthful demeanor for so long. “Got my master’s degree at mastering ceremonies”, he boasts, before filling it with meaning: “Everybody just want a place where they can belong / I think of every one of y’all when I’m makin’ these songs / You know A-Plus put his heart in anything that he on”. And that certainly includes his beats.