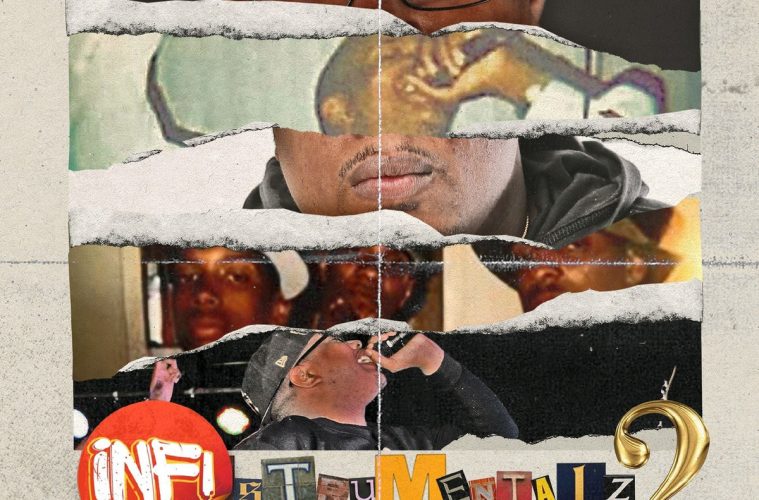 I didn’t even know there was an “INFsTruMentalz 1.” Can you blame me though? It apparently came out EIGHT YEARS AGO. That’s a long time to go between albums!

INF stands for I Never Fail according to DJ Tony Touch, who hosts the free version of this album I copped. According to INF’s Bandcamp if you buy the physical CD you also get a free digital version “with no DJ.” I wonder if Tony Toca is insulted that he’s basically being used as a perk — pay more and get a version WITHOUT that guy talking over my songs. I’m not sure that’s how I’d be treating the mixtape legend who created the “50 Emcees” series if I was an up-and-coming artist. Then again maybe Touch is just happy for the publicity that he gets from being on this release – a win/win scenario if they both get more ink.

To be honest I don’t think I’d want a version of “INFsTruMentalz 2” that wasn’t presented like a mixtape, especially given that he straight up jacked for beats like Ice Cube on some of these tracks. There’s no playing like they’re new either so everything is exactly what you’d expect. “Know the Ledge Freestyle” is that classic Eric B. & Rakim bassline. “Keep Risin to the Top Freestyle” is that Keni Burke track that’s been looped by dozens of people that never seems to get old. The one that surprised me the most was the “Sucka Nigga Freestyle”. I’m not sure I ever wanted to hear anybody other than Q-Tip flow over this loop, but INF! isn’t disrespecting it with his bars.

INF! can be best described as a Chino XL or Skillz type punchline rapper, though not as lyrically nasty as the former or as well known for ghostwriting as the latter. On tracks like “Nobody Safe” I enjoy the ferocity of his flow and the tightness of his breath control, although I think some of his punchlines miss the mark. “Flow so cold, make you clog yo’ sink, drown yo’self next to the dishes”. Really? I mean that’s A+ for creativity but a straight F- for intimidating anybody, especially since you have to stop and think about water being so cold it would freeze, expand, block up the drain and cause one HELL of an overflow — enough to fill up an apartment or a whole house. Wouldn’t you just turn off the water first? Or is INF! standing there with a gun to your head making you leave it on until you drown? Wouldn’t he drown then too? Nonsense.

While many artists under deliver with albums that are only 5-7 tracks long these days, INF! has the exact opposite problem with 19 songs and an album that clocks in at over an hour long. Let me reiterate that INF! is a perfectly serviceable punchline rapper, but after I’ve heard the third or fourth punchline referencing Tupac Shakur, I’m ready for a break and want to hear from someone else. Thankfully songs like “Table for Two” featuring Trell, smoothly produced by Harles Mac, provide that much needed variety.

This isn’t the easier album to rate. On some “mixtapes” like this I wouldn’t provide a score for music given the number of recycled instrumentals, but INF! has plenty of original tracks by JD Riggz and Jimmy Dukes, and even a few that he competently produced all for delf. If I’m being fair to INF! I can’t even be mad at the beats he freestyled over because they’re all classic material. At the end of the day though I’m left wondering how he allegedly won “Best Male Rapper of the Year” at the ROC Awards given Mad Dukez is from the same hood. To borrow and rework an old saying by Jay-Z, “He’s alright but he’s not ill.” INF! is definitely REAL, but he’s just not the best spitter I’ve heard by a fair margin.